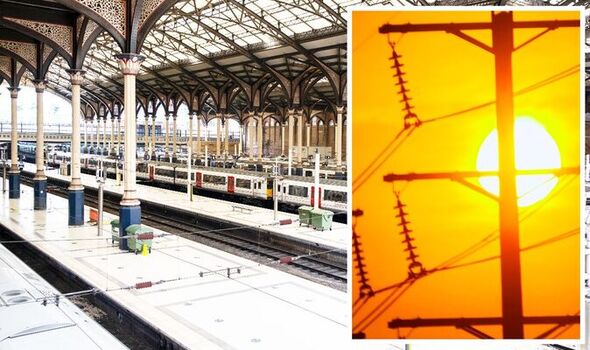 Cabinet Office Minister Kit Malthouse warned that transport services face “significant disruption” over the two days, which are expected to reach temperatures as high as 40C in some parts of the UK.

Government’s Cobra committee, Mr Malthouse told the BBC: “Obviously the transport providers are messaging people that they should only travel if they really need to on Monday and Tuesday. Services are going to be significantly affected.

“The heat will affect rails, for example, so the trains have to run slower. There may be fewer services. People need to be on their guard for disruption.

“If they don’t have to travel, this may be a moment to work from home.”

The Minister said steps have been taken to ensure hospitals and ambulances that may come under pressure were prepared, while schools were being issued with guidance to enable them to remain open.

Record high temperatures are expected to hit the UK over the two days next week.

The heat is so extreme the Met Office has issued its first-ever red warning, flagging an “exceptional hot spell on Monday and Tuesday”.

Monday and Tuesday see a red warning over urban areas in England, ranging from Surrey up to Manchester and York.

The warning, in effect from midnight on Monday to the end of Tuesday, said: “Exceptional, perhaps record-breaking, temperatures are likely on Monday, then again on Tuesday. Nights are also likely to be exceptionally warm for the UK, especially in urban areas.

“This is likely to lead to widespread impacts on people and infrastructure.

“Temperatures are expected to drop away from Wednesday onwards.”

The extreme temperatures caused Ministers to hold an emergency Cobra meeting on Saturday after meteorologists warned lives could be at risk.

Meteorologists have given an 80 percent chance of the mercury topping the UK’s record temperature of 38.7C in Cambridge in 2019, with the current heatwave set to peak on Tuesday.