Martin Daubney disagreed with presenter Jo Coburn on the BBC’s coverage of Brexit Party rallies at the start of the EU election campaign. The Brexit Party candidate claimed the BBC had “no interest” in covering rallies at the start, to which Ms Coburn contended that is “not true”. Speaking on BBC Politics Live, the Spectator’s Katy Ball began: “I’ve been to a few of these Brexit Party event rallies recently. I went to one in Dudley, I was a the Bolton rally, and it was a really interesting thing to cover.

“I thought people were very positive and therefore I think you should encourage access.”

Ms Coburn interjected: “Right, including the BBC. We just ran a report from two of the rallies by the Brexit Party.

“So it’s not true Martin to say we haven’t been covering it, this programme particularly has and we’ve had representatives.”

Mr Daubney replied: “You get involved when it gets too big ignore. 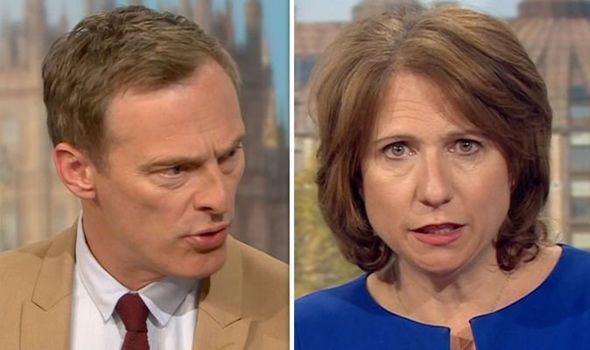 You get involved when it gets too big ignore

“But at the start you had no interest.”

The comments follow Nigel Farage criticising the BBC during a press conference, over its lack of rally coverage.

Jessica Parker, a BBC News political journalist, asked Mr Farage about the role the Brexit Party would like to play in future negotiations, and if the UK was to seek a WTO Brexit, how much negotiating would be needed.

Mr Farage replied: “Well, it is very very nice to see the BBC here, I must say, no it really is.

“I have been all over the country speaking at big rallies with a couple of thousand people at most of them, we haven’t seen the BBC at any of them. So it is jolly nice that you have made the effort to come.”

The grassroots eurosceptic party, led by Mr Farage, is polling at a huge 37 percent in the latest YouGov poll for The Times of 3,864 British adults from May 19-21 – likely to be one of the last key indicators before the British public cast their vote.

If this is reflected at the ballot box, the figure would be the largest ever achieved by a non-mainstream political party in the European elections. It would also be the highest since the Labour Party romped to victory with 42.6 percent of the overall vote at the European elections in 1994.

Ahead of tomorrow’s election, the Brexit Party is also forecast to trump the victory of Ukip in the 2014 election by almost 10 percent.

Ukip, of which Mr Farage was leader during that campaign, was the most supported Party in the EU vote, having a gained 27.4 percent and 24 seats.

A 37 percent share of the vote is likely to get around 40 Brexit Party MEPs into the European Parliament and pile pressure on Theresa May.

If the polls are correct, the Brexit Party will exceed the 27 percent and 26.7 percent the Tories won with in the 2009 and 2004 elections respectively.