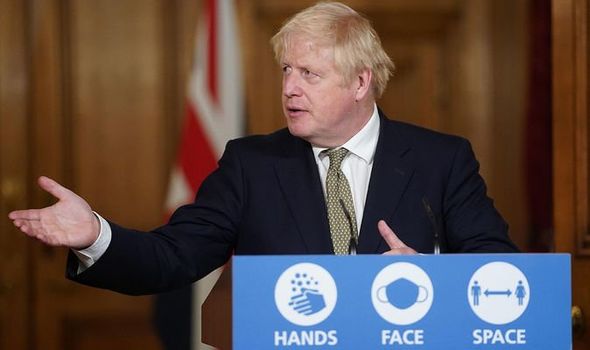 “These figures are flashing at us like dashboard warnings in a passenger jet – and we must act now,” he said. He unveiled a new three-tier Local Covid Alert System yesterday, insisting that the Government was pursuing a “balanced and moderate” approach between a national lockdown and giving up the fight against the virus.

But his Chief Medical Officer Chris Whitty was “not confident” even pub closures and other draconian restrictions under the highest level alert will be enough to “get on top” of the second wave.

And the Prime Minister also hinted at a possible “circuit breaker” short lockdown to coincide with school holidays, suggesting only the “immediate harm” to pupils was more sweeping measures now.

“We don’t want to go down that extreme route right now,” he said while not ruling out the measure in the longer term.

The new three-tier Local Covid Alert Level regime to “simplify and standardise” the rules introduced across England. Under the system, areas will be designated at medium, high or very high risk of coronavirus spread. 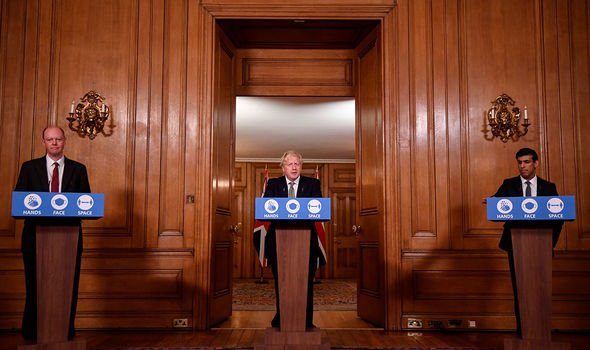 Setting out the new regime at a Downing Street news conference, the Prime Minister said: “We are entering a new and crucial phase of our fight against Coronavirus because the number of cases has gone up four times in four weeks and it is once again spreading among the elderly and vulnerable.

“There are already more Covid patients in UK hospitals today than there were on March 23 when the whole country went into lockdown and deaths, alas, are also rising once again.”

He added: “No one, least of all me, wants to impose these kinds of erosions of our personal liberty, but I am as convinced as I have ever been that the British people have the resolve to beat this virus and that, together, we will do just that.”

Britons had to stick to the rules to give the country any change of a relatively normal Christmas, the Prime Minister said.

“We’ll do our absolute best to try to make sure we can get life back to as close to normal as possible for Christmas.

“But that is going to depend, I’m afraid, on our success in getting this virus down and our ability as a country to follow through on the package of measures.”

Also speaking at the news conference, Professor Whitty was “not confident” that tier three proposals for the “very high” alert areas with the highest rates of transmission “would be enough to get on top of” the virus in those areas.

He said the system included “a lot of flexibility” for local authorities to go far further than closing pubs and banning household mixing as the basic Government proposals for such regions was “not sufficient” to tackle the worst rates of infection.

Speaking in the Commons earlier yesterday, Mr Johnson warned the coming weeks will test the “mettle” of the country.

“With all the lessons we have learned in the last few months we are becoming better and better at fighting this virus and though I must warn the House again that the weeks and months ahead will continue to be difficult and will test the mettle of this country I have no doubt at all that together we will succeed,” he said.

Restrictions for the three Local Covid Alert Levels include:

::Tier One – medium risk: Existing national measures announced last month including the Rule of Six limit on social gatherings and 10pm curfew for the hospitality industry will stay in place.

::Tier Three – very high risk: All household or support bubble mixing in any setting will be banned. Pubs and bars will be closed unless able to operate as restaurants and wedding receptions will be prohibited. The Government will also advise people not to travel into or out of “very high risk” areas unless they need to for work or for care purposes.

Mr Johnson pledged an extra £1billion of Government support to help councils in high and very high risk areas cope with the challenges of lockdown measures.

He also confirmed the emergency NHS Nightingale hospitals across the North of England were preparing to reopen to care for a fresh surge in patients suffering from serious coronavirus cases.

People will be able to check their local Covid alert level by entering their postcode on the Government’s gov.uk website or through the NHS COVID-19 smartphone app.

MPs are set to vote on the package of measures in the Commons today amid growing signs of dissent from both the opposition and Government benches.

To find out about coronavirus in your area, please fill in your postcode below.

Labour leader Sir Keir Starmer was “sceptical” about whether the Prime Minister had a plan to tackle the coronavirus while some Tory MPs yesterday expressed concern at the latest restrictions.

In a joint statement, metro mayor Steve Rotheram, city mayor Joe Anderson and the leaders of Liverpool City Region’s six local authorities warned the Government: “We must be clear that we have not yet reached an agreement on the wider economic support package that we require.”

London’s Labour Mayor Sadiq Khan warned the city could be moved from the medium to high risk level later this week.

“We know that the virus is now spreading in every corner of London,” he said.

In a marathon two-hour session in the Commons, the Prime Minister faced questions from more than 100 MPs.

Mr Johnson admitted he did not know when a coronavirus vaccine might become available, pointing out that no vaccine had been found to protect against Sars 18 years after the discovery of the respiratory virus.

He told a Tory backbencher who raised the issue: “I don’t wish to depress him, but we must be realistic about this.

“There is a good chance of a vaccine, but it cannot be taken for granted.”

Sir Keir Starmer signalled a further fracturing of the cross-party consensus over tackling coronavirus, insisting he was “sceptical” about whether the Government had a plan.

In a warning to Mr Johnson, the Labour leader said: “We will consider the package, we will look at the small print of the Prime Minister’s statement, we will discuss them with local mayors, councillors and leaders in the areas most affected and we’ll scrutinise the economic package that sits alongside them.

“But I have to say to the Prime Minister, I am now deeply sceptical that the Government has actually got a plan to get control of this virus, to protect jobs or retain public trust.”

“I strongly urge him to work out where he stands, to stop flip-flopping from one side to the next – or rather to go back to his previous position which was to support the restrictive measures where necessary to drive the virus down,” the Prime Minister said.