Home » Europe » Black Lives Matter protests: How focus differs between US and UK

Black Lives Matter protests: How focus differs between US and UK

Kathleen Burk, a history professor at University College London, says there is an important difference between anti-racism protests in the UK and America – and explains why images of policemen kneeling could be a significant moment:

What is the point of pulling down a statue? What does it accomplish?

The immediate answer is that the statue itself symbolises whomever it is meant to commemorate – and the pulling down is a symbol of the movement against it.

The statue, theoretically, is now dead. But the symbolic act is alive and becomes a new symbol.

The pulling down of the statue of Edward Colston in Bristol is an example.

It is striking, however, that in the US, in the period since the death of George Floyd, no statues have been pulled down – no groups of protesters in the US have done what the British have done.

Quite likely it is because the death of George Floyd was such a tragedy, and has become such a symbol in itself, that the destruction of a statue at this point would seem almost an irrelevance. The nature of the Black Lives Matter protests in the US and the UK differ markedly.

Those in the US are focused on two crises: institutional racism and police brutality. Indeed, they can seem inseparable.

What is notably different from the anti-racism protests in the 1960s, such as the Long Hot Summer of 1967 which saw 159 riots, is that now they are multicultural and multiracial, more inclusive. 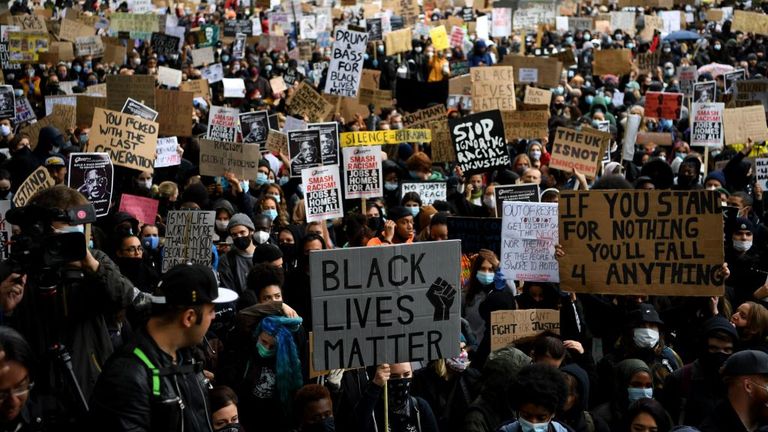 The real driver is social media. George Floyd was but one black man among thousands killed by the police; the fact that the whole appalling video of a man dying was uploaded and rapidly went viral was crucial to the immediate explosion of widespread protest.

The Black Lives Matter protests in the UK have had a slightly different focus from those in the US.

Yes, people have demonstrated against institutional racism, but the instances of police brutality are so relatively few compared with the US that it is not a central part of the UK protests. 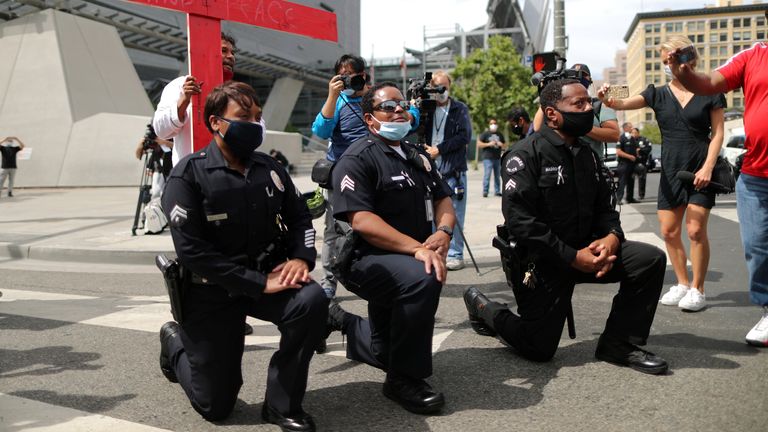 American police are always armed, are frequently seen in combat gear, and are instructed that their first duty is to protect fellow officers, not to protect the public.

Conversely, most policemen in the UK are not normally armed and are trained to police with the consent of the population: their main role is to protect the public.

Policemen kneeling with protesters is a visual beginning.

Race and Revolution: Is Change Going to Come?

Sky News will broadcast a global debate show on Tuesday night at 8pm – looking at the issues raised by the Black Lives Matter protests, and examining institutional racism and how we fix it.

If you would like to be part of our virtual audience, and have a chance of putting a question to our panel, please send your name, location and question to [email protected]