Four red postboxes have been painted black to celebrate and honour black Britons – both past and present.

The postboxes are in London, Glasgow, Cardiff and Belfast – and are Royal Mail’s way of marking Black History Month in October.

Each of the special edition postboxes have been painted black with a gold trim, and feature a social media link and a significant figure in the British black community. 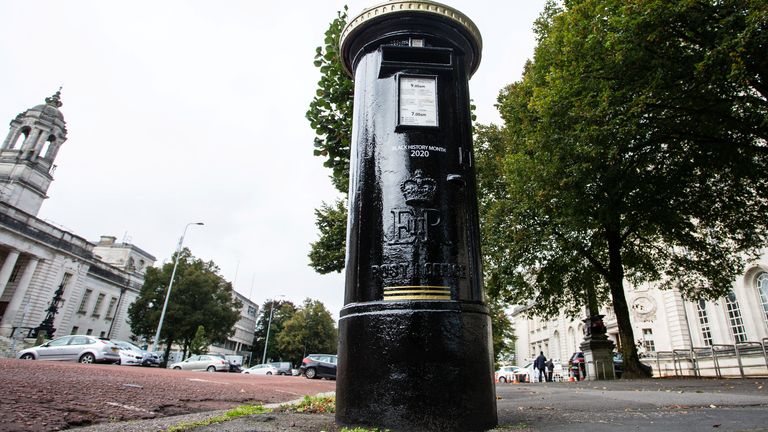 A QR code on the postboxes can be scanned to bring up a full list of all the black Britons who have appeared on special stamps across the years.

Peter De Norville, Royal Mail’s head of diversity and inclusion, said Black History Month is “a great opportunity to celebrate the contributions that black people have made to this country over generations”.

He added: “We are also using it as an opportunity to celebrate the vital work that our black employees do throughout the nation, from the mail bag to the meeting room.”

Tull featured in a set of stamps in 2018 which marked the centenary of the end of the First World War.

He was the first black Army officer to command troops in a regular unit. Celebrity and co-founder of the Comic Relief charity, Sir Lenny Henry, has been honoured in Belfast.

Mary Seacole, who nursed wounded British soldiers back to health during the Crimean War, features on a postbox in Cardiff.

The London postbox is in Acre Lane in Brixton, which is near to Black Cultural Archives, a leading museum for the British black community.

This postbox features the image Queuing at the RA by Yinka Shonibare.

The artist was one of six who were commissioned by Royal Mail to produce original artworks for a set of special stamps issued to mark the 250th anniversary of the Royal Academy (RA).