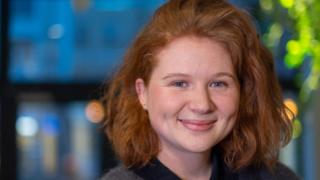 A German biscuit heiress has sparked outrage by saying the company “did nothing wrong” in its use of forced labour during Nazi rule.

Verena Bahlsen, 25, was responding to an earlier controversy when she made the comment about forced workers.

Bahlsen, which makes Choco Leibniz, employed about 200 forced labourers between 1943 and 1945 – most of whom were women from Nazi-occupied Ukraine.

Critics have accused Ms Bahlsen of being “oblivious to history”.

The company itself has since distanced itself from her comments.

What did Verena Bahlsen say?

The controversy started last week, when Ms Bahlsen told delegates at a marketing conference: “I’m a capitalist. I own a quarter of Bahlsen, that’s great. I want to buy a sailing yacht and stuff like that.”

Although German newspaper Handelsblatt reported that the audience clapped and laughed along with her, some social media users accused the heiress of being insensitive to the company’s past exploitation of forced labourers by making light-hearted remarks about her wealth.

Asked about the criticism in an interview with Bild newspaper, Ms Bahlsen replied: “That was before my time, and we paid the forced labourers exactly as much as German workers and we treated them well.”

She added that the company had nothing to feel guilty about.

These comments only deepened the controversy.

What has the response been?

The Nazi Forced Labour Documentation Centre in Berlin tweeted that there was “a great knowledge gap for family members of the Bahlsen family”.

“The issue of Nazi forced labour is often still a blind spot in the collective memory,” they added.

Guy Stern, a 97-year-old scientist whose family were killed in the Holocaust, also criticised Ms Bahlsen – telling reporters that she was talking about forced labourers “from the high viewpoint of an heiress”.

The Social Democratic Party’s general secretary Lars Klingbeil said: “Someone who inherits such great wealth, also inherits responsibility and should not be so arrogant.”

And historian and writer Felix Bohr argued in Der Spiegel magazine that although Ms Bahlsen couldn’t change her company’s past, “she must face up to its historical responsibility”.

He also criticised her “obliviousness to history”.

But Handelsblatt journalist Christoph Kapalschinski, who originally reported from the marketing conference, defended Ms Bahlsen and said her comments about being a capitalist had been “taken out of context”.

He adds that “anyone who knows Verena Bahlsen” would know that she likely downplayed the treatment of the company’s forced labourers “because she does not know any better – not because she’s a history revisionist”.

In a statement, Bahlsen said: “The company is aware of the great suffering and injustice that forced labourers as well as many other people had experienced, and recognises its historical and moral responsibility.”

Police warn criminal gangs are 'coming out of lockdown'