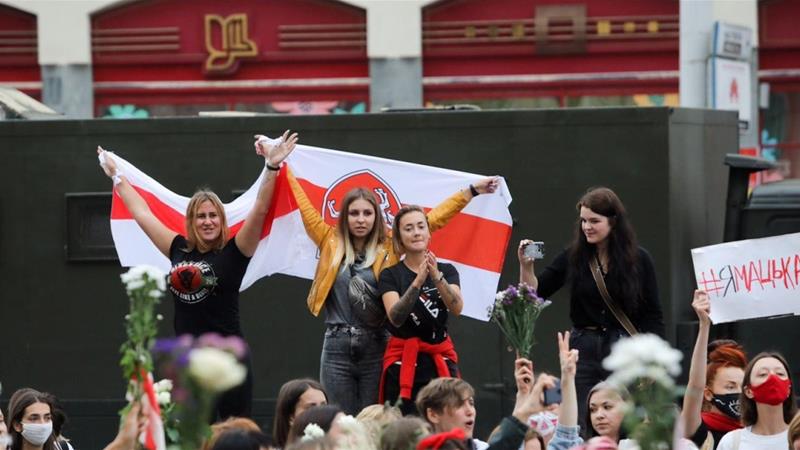 Authorities in Belarus have deported some foreign journalists reporting in the country and withdrawn the accreditation of many Belarusian reporters covering large anti-government protests that erupted after a disputed presidential election earlier this month.

Tens of thousands of people have taken to the streets in recent weeks, rejecting President Alexander Lukashenko’s landslide victory in the August 9 vote, which his opponents say was rigged. Several people have been killed and hundreds more wounded during a violent police crackdown, with thousands of protesters detained.

Ahead of another protest planned for Sunday, the Belarusian Association of Journalists said at least 17 journalists were stripped of their accreditations, which are issued by the foreign ministry. Among them were  a video journalist and a photographer from Reuters news agency, two from the BBC and four from Radio Liberty.

“We condemn in the strongest possible terms this stifling of independent journalism,” the BBC said on Saturday.

The Associated Press news agency also said two Moscow-based journalists who were covering the recent demonstrations in Belarus were deported to Russia on Saturday. Also, the AP’s Belarusian journalists were told by the government that their press credentials had been revoked.

“The Associated Press decries in the strongest terms this blatant attack on press freedom in Belarus. AP calls on the Belarusian government to reinstate the credentials of independent journalists and allow them to continue reporting the facts of what is happening in Belarus to the world,” said Lauren Easton, the news agency’s director of media relations.

Germany’s ARD television said two of its Moscow-based journalists also were deported to Russia, a Belarusian producer faces trial on Monday and their accreditation to work in Belarus was revoked.

The decision was taken on the recommendation of the country’s counterterrorism unit, AFP news agency cited government spokesman Anatoly Glaz as saying.

In comments at a government meeting on July 23, Lukashenko had threatened to expel foreign journalists, accusing them of inciting protests against him before the vote.

“President Lukashenko has previously complained about foreign media’s coverage of protests in Belarus, and has cracked down on foreign media,” said Al Jazeera’s Bernard Smith, reporting from Vilnius in Lithuania.

He noted that most journalists affected by Saturday’s move were Belarusians who work for foreign media organisations.

“If they continue to work without accreditation, they risk being arrested,” Smith said.

Opposition leader Svetlana Tikhanovskaya, who is in exile in Lithuania, said on Saturday she was worried about the government targeting the media.

“The only way it will attempt to cling onto power is by fear and intimidation,” she said.

“We condemn the disproportionate use of force and urge the Belarusian authorities to stop the violence and the threats to use military force against the country’s own citizens and release immediately and unconditionally all those unlawfully detained,” the missions of the United States, the United Kingdom, Switzerland and the European Union said in the joint statement.

“Intimidation and prosecution based on political grounds need to stop. We call on the Belarusian authorities to respect the country’s international obligations on fundamental democratic and human rights.”

The protests, some of which drew enormous crowds estimated at 200,000 or more, are the largest and most sustained challenge of Lukashenko’s 26 years in office, during which he consistently repressed opposition and independent news media.

Dubbed by critics as “Europe’s last dictator”, Lukashenko has denounced a Western plot to bring him down and rejected the rigging allegations.

The results of the presidential election have been rejected by the European Union, which is preparing sanctions against high-ranking Belarusian officials.

Katsiaryna Shmatsina, of the Belarusian Institute for Strategic Studies, told Al Jazeera the sanctions against “individuals who are guilty of human rights violations in Belarus” is “an important step” but added that “the regime considers this the cost of doing business”.

“This won’t stop them from further intimidating the Belarusians.”