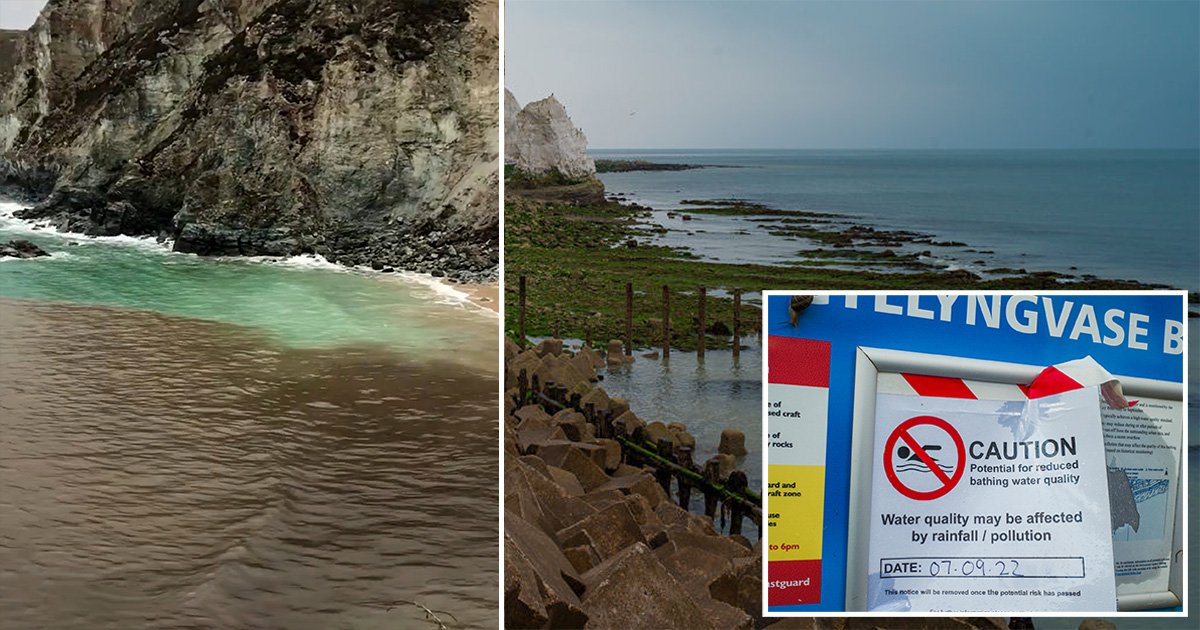 The picturesque view of a popular Cornish cove turned to something much more disgusting this weekend when raw sewage was released into the ocean.

Some blue could still be seen towards the edge of the sewage slick, however, demonstrating that the colour change was not down to the weather conditions but the release of human waste.

A local surfer shared footage of the grim sight with surfing magazine Carve, who posted footage online saying it was ‘Unbelievable. A dad just got out this arvo and said to his three-year-old “Best wash the sewage off…”

‘It is still stinking. No way am I surfing in that.’

Another video posted online showed brown liquid pouring out of a pipe at St Agnes, captioned ‘sh*t pouring into the sea’.

Many responded to say how saddened they were by the images, tagging in South West Water to demand they stop the practice.

One woman wrote: ‘This breaks my heart. I’ve played with my kids on this beach.’

Another said: ‘@SouthWestWater how DARE you. Can you imagine what this does to our marine life, let alone humans who choose to swim at this time of year. Shame on you. What have you got to say for yourselves?’

South West Water admitted they had allowed sewage to be pumped into the sea, saying it was a ‘controlled release’ and they had to do this because of heavy rainfall, to stop sewage backing up into people’s homes.

Water companies are banned from dumping raw, untreated sewage into our seas and rivers, but they get around it with an exception.

After heavy rainfall, they are legally allowed to release wastewater in order to stop the sewer system becoming overwhelmed.

These ‘storm overflows’ are only supposed to happen in ‘exceptional circumstances’.

But Surfers Against Sewage reports that they are occuring at an ‘alarming rate’.

Writing in Metro.co.uk in August, former Green Party leader Caroline Lucas blamed a lack of investment in the water network, lax regulation and cuts to funding for the Environment Agency, claiming that privatised water companies had ‘utterly failed’.

She said data suggests the amount of sewage pumped into UK waterways has increased by 2,553% in the past five years.

‘Following heavy, localised rainfall this morning (October 30), a permitted storm overflow triggered at Trevaunance Cove in St Agnes, Cornwall. Storm overflows are designed to release excess storm water into rivers and seas when a prolonged rainfall occurs to prevent the risk of sewage backing up and flooding homes and public spaces by allowing a controlled release.

‘We continue to increase investment in the region’s infrastructure as part of our continued commitment to protecting and enhancing the natural environment.’