ROME — Over clanking coffee cups at Moscow’s luxurious Metropol hotel in October last year, a close aide to Matteo Salvini, Italy’s most powerful politician and the emerging leader of Europe’s nationalists, sat for more than an hour with a couple of Italian colleagues and some Russian officials.

Unbeknown to them, Italian reporters watched them in the hotel, and in February they published an account in an Italian magazine alleging that the kaffeeklatsch was busy negotiating a complicated plan to secretly finance Mr. Salvini’s hard-right League party with Russian money ahead of the European elections.

The report intrigued analysts and liberal politicians, but its cloudy provenance and Mr. Salvini’s continued denials led the questions to taper off, even as Mr. Salvini’s poll numbers and full-throated support of Mr. Putin increased. But on Wednesday, Buzzfeed News published an audio that seemed to confirm the Italian report’s version of the meeting.

The recording was the second to come to light in just months that appeared to reveal how President Vladimir V. Putin of Russia has actively sought to destabilize the European Union by boosting nationalist, populist parties like the League. In May, the Austrian government fell after a video revealed the leader of Austria’s right wing discussing public contracts in exchange for Russian campaign aid.

For now, in Italy, where Mr. Salvini appears immune to political injury, the audio did not seem likely to threaten his grip on power. But it did raise new questions about Russia’s willingness to meddle in Europe, and the willingness of pro-Russian nationalists in the heart of Western Europe to accept that help.

“Funding to an Italian political party by a foreign state is illegal,” said Emanuele Fiano, an Italian member of Parliament in the opposition Democratic Party, who on Wednesday called on Mr. Salvini to appear before the Lower House to explain the financial negotiation heard on the tape.

“It’s also dangerous to know that an Italian party has a contract of collaboration with a foreign state,” he added in an interview.

Two former prime ministers from the Democratic Party also called on Wednesday for an official inquiry.

Mr. Salvini, who is Italy’s deputy prime minister and minister of the interior, on Wednesday denied, again, taking any funding from Russia. 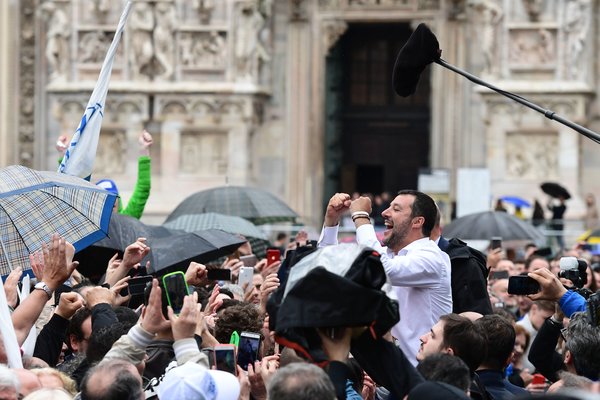 “I already sued in the past and I’ll do it also today, tomorrow and the day after,’’ Mr. Salvini responded in a statement. ‘‘I never took a ruble, a euro, a dollar or a liter of Vodka in funds from Russia.”

In the recorded audio, which could not be independently verified, Gianluca Savoini, Mr. Salvini’s longtime aide, unofficial liaison to Russia and a strong advocate for a nationalist resurgence throughout Europe, can be heard talking.

“Next May will be the European election,’’ he said. ‘‘We want to change Europe. A new Europe has to be close to Russia as before because we want to have our sovereignty.”

After some more similarly sweeping comments, he then let his colleagues get down to business, deferring to “our technical partners who can continue this discussion.”

The technical part, as first reported by the Italian magazine l’Espresso and detailed in the audio obtained by Buzzfeed, included discussion of how money could be secretly funneled into the war chest of Mr. Salvini’s party.

An unnamed Russian oil company — through intermediaries — would sell at least 3 million metric tons of fuel over the course of a year to Italy’s oil giant Eni for about $1.5 billion.

The Russian oil company would then discount the gas at a value of about $65 million, according to an analysis by Buzzfeed, and it would be that money that intermediaries would secretly funnel to the League.

According to “the planning made by our political guys,” one of the unidentified Italians on the tape said, that money “can sustain a campaign.”

That other Italian, who remains unidentified, says of the money from the discounted gas, ‘‘We count on sustaining a political campaign, which is of benefit, I would say of mutual benefit for the two countries.”

The Italians seemed in a rush to get the money before May’s European election campaign, in which Mr. Salvini ultimately won big and solidified his position as the primary power broker of Italy. They were unbothered by apparent attempts by the Russians to skim some of the money for themselves.

“It doesn’t matter,” Mr. Savoini said in Italian to his compatriots at a certain point. “It’s a guarantee. It means they will always do that and for us, it’s OK.”

On the day before the hotel meeting, Mr. Salvini disappeared from the eyes of reporters after a news conference for many hours, and l’Espresso reported that he met with Dmitry Kozak, the Russian deputy prime minister, who is responsible for energy policy. The meeting was not on Mr. Salvini’s public schedule.

Mr. Savoini himself also denied having struck a deal.

“We never took a dime from Russia, ever. No deal with anyone,” he wrote in a text message on Wednesday. “I proposed nothing. Salvini knew nothing because there doesn’t exist any proposal.”

But on Wednesday he acknowledged in a text message that he was in the hotel lobby, but did not recall who he was sitting with during the meeting because “it was full of Italians and Russians that morning. All over the hotel and also who spoke with me.”

Stefano Vergine, co-author of The Black Book of the League, which first revealed details of the meeting in February in an excerpt in l’Espresso, did not think much of the denials by Mr. Salvini and Mr. Savoini about never receiving money from Russia.

“This was obviously not the issue,” Mr. Vergine said in an interview. “The issue was that his guy was negotiating the funding.”

For now, that did not seem to be enough to cause a real political headache for Mr. Salvini.

In part, that is because no one is surprised by Mr. Salvini’s admiration for Mr. Putin, who is widely respected in Italy as a strongman, especially among conservatives.

On Wednesday, Mr. Salvini made his eurosceptic friend Lorenzo Fontana Italy’s new minister for European Affairs. In March, Mr. Fontana was a driving force behind an event in Verona for the World Congress of Families, a conservative group with a history of Russian funding. In 2014, he sat next to Mr. Salvini in matching “No Sanctions On Russia” T-shirts in European Parliament.

But Mr. Savoini, who is recorded on the tape, is an even more outspoken fan of Mr. Putin.

His Lombardy Russia association was founded in 2014 explicitly to reflect Mr. Putin’s worldview. In Moscow, Mr. Savoini has sat in on high level meetings between Mr. Salvini and Russian officials, and was present for meetings with Mr. Putin, Mr. Salvini and other Russian and Italian government officials last week.

Asked last week about Mr. Putin’s visit, Gianmatteo Ferrari, the president of Lombardy Russia, said, “President Putin is a serious, loyal and pragmatic person. He does what he says and says what he does. He defends his people and his homeland, as it should be in every nation. America first, Russia first and today, luckily, also Italy first.”