Ann Widdecombe, who joined the Brexit Party last week amid Brexit chaos in Britain, spoke at an event on stage alongside leader Nigel Farage on Tuesday evening. The former Conservative MP was asked by an audience member what would have been the outcome of Brexit if former Tory leader Margaret Thatcher was in charge of the process. Host Richard Tice, said: “If Margret Thatcher was Prime Minister today, do you think she would have honoured the result of the referendum? Would we have left by now?”

Ms Widdecombe instantly replied: “I have absolutely no doubt that had Mrs Thatcher been Prime Minister in 2016, we would have been out by 2017.”

The swift response by the former Conservative Party MP generated huge cheers from the pro-Brexit audience.

During an interview last week on Good Morning Britain, the veteran Tory MP voiced her support for Brexit Party leader Nigel Farage, declaring he has been “more successful than any politician other than Margaret Thatcher”.

She said: “Nigel Farage has been more successful than any politician other than Margaret Thatcher that I can think of in my lifetime of getting his agenda through. 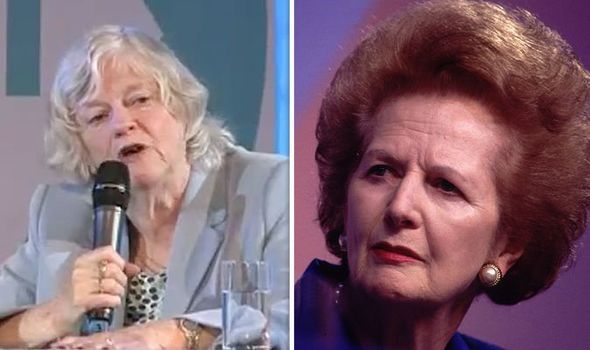 I have absolutely no doubt that had Mrs Thatcher been Prime Minister in 2016, we would have been out by 2017

“And he’s actually done it from outside Westminster, and he’s got his agenda through.

“Now what we are saying is that if in the European elections we win overwhelmingly, which would be what my aim would be.

“If we win overwhelmingly in the European elections, that will send a shock message.

“MPs in Westminster will then start fearing.”

Mr Farage has gathered support for his Brexit Party and last week announced a string of candidates running to be MEPs in the European elections, including Ms Widdecombe and Jacob Rees-Mogg’s sister Annunziata.

A YouGov poll taken between April 23-26 of 5412 people in the UK, found the Brexit Party leading the European Parliament elections with 28 percent of the vote.

The Labour Party remain on 22 percent, while the Conservatives fell to 13 percent.

The Government have been locked in negotiations with the Labour Party and on Monday, May’s de-facto deputy, David Lidington, said the meeting was “productive” and “positive”, with the cross-party talks now expected to run into next week.

Mrs May and Labour Party leader Jeremy Corbyn are expected to clash over Brexit in Prime Minster’s Questions on Wednesday afternoon.