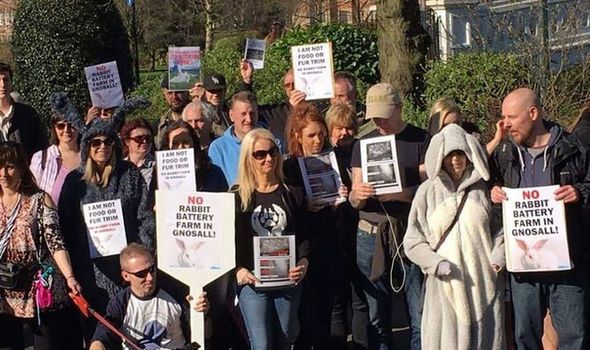 A group, who call themselves Rabbit Farm Resistance UK, plans to gather on Monday to protest against plans to kill, cook, store and freeze rabbits. It says a rural business called T&S Rabbits wants to become an “animal processing” facility.

But T&S Rabbits told Derbyshire Live the demo will actually have a positive effect on business. The farm has been operating at the site near Carsington Water, Derbyshire, for several years but now wants to begin harvesting and processing rabbits onsite.

Phil Kerry, owner of the firm, said: “I am amazed that individuals will spend their valuable time demonstrating, especially as no one is at the farm to be affected.

“The publicity may be having a negative effect for their cause as I’m receiving more enquiries from potential customers as a result than I have for a number of years.

“The farm has already been established for a number of years without complaint.

“The proposal will give rise to very few traffic movements.

“A small number of HGV movements will be necessary as a result of the building works.

“Our proposal will give no rise to smell or noise, our waste is frozen and therefore will not cause any nuisance – we will not affect the tourists at Carsington Water.

“Rabbits have been bred for slaughtering since medieval times. Rabbit meat is extremely popular across Europe, the USA and across the world.

“Wild rabbits are shot regularly across our country, I would imaging in far greater numbers than we are dealing with. Perhaps the sympathisers should try to get that banned.”

And many online have praised Mr Kerry and condemned the activists.

One man shared: “These hypocrites wouldn’t dare stand outside a Halal slaughterhouse.”

Another Facebook user posted: “I do believe that if you eat a pig or a cow then there’s no difference to any other animal. The fact that people object to dog meat but happily eat other animals is down to human labelling and hypocrisy.”

In a lengthy Facebook comment, one woman said: “I love how most people have some weird definition of what is acceptable to eat and what is not.

“Rabbit and horse are all tasty meats but for most they see it as barbaric.

“Pigs are more intelligent than dogs but if you suggested eating a dog or a cat then you will get slated.”

The animal rights campaigners want the council, which is controlled by the Tories, to reject the application. A petition has so far been signed by more than 12,500 people.

Their complaints concerning increases to traffic, and the smell and waste produced by the site putting off people from visiting the area were dismissed by Mr Kerry.

A spokesman for Rabbit Farm Resistance UK said: “As a society we need to be moving past the creation of more avenues to exploit animals, and since there are no UK slaughterhouses currently licensed to slaughter rabbits it would be taking a backwards step to build one.

“Rabbits are sensitive, complex individuals who are naturally fearful, do not cope well in a farming environment, and experience extreme stress at slaughter.

“They deserve far more than to be treated this way, as objects for their bodies and skins – particularly given the abhorrent ways in which they are treated on the farm whilst alive.”

The full application can be viewed on the Derbyshire Dales District Council planning portal under the reference 21/00130/FUL.