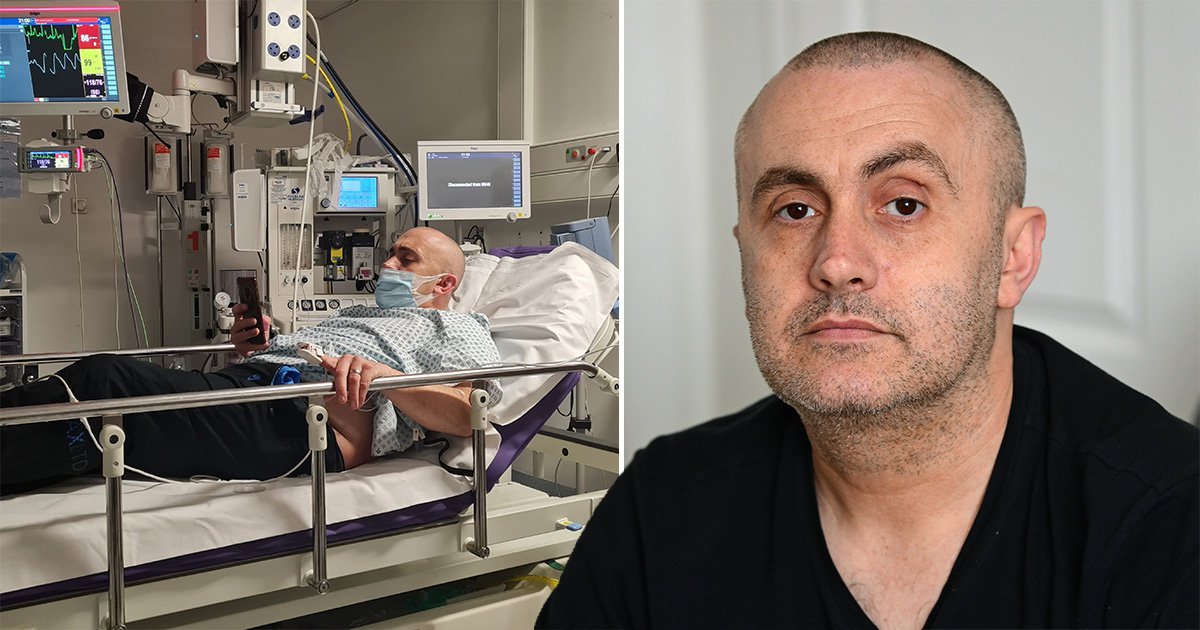 An Amazon delivery driver claims he was told to continue his shift after suffering terrifying symptoms that were later revealed to be a heart attack.

Neil Martin, 46, was hit by chest pains, dizziness and cold sweats while behind the wheel after starting his route in Wigan.

But his manager at Deva Logistics, the agency Amazon employs him through, is accused of insisting they could only ‘take half the route off him’.

The dad-of-two says he feels like he ‘could have died on that road and they didn’t care’.

Deva Logistics has denied the claims, saying they were not aware he had been left with packages.

Neil tried to ignore his symptoms but eventually rang the Deva office around 2pm on March 16.

He got no answer, so sent a text reading: ‘Mate can you call me, am getting chest pains and keep going dizzy am gonna have to go and get checked out.’

‘The manager rang me back and I asked if someone could come and get my packages because I wanted to go to the hospital’, he said.

‘They told me someone could come and take half my route off me but that they couldn’t do any more than that.’

Despite his concerning symptoms, Neil says he continued with his shift.

‘I didn’t realise how serious it was at the time. But it went on right through the afternoon, just getting worse and worse’, he said. ‘The dizzy spells were so bad I kept having to pull over because I couldn’t see anything.’

After Neil returned to the depot hours later, at around 6.30pm, his manager is said to have asked if he could work on a smaller route the next day.

Neil said: ‘I said I need to go to hospital first before I start thinking about packages.’

After work, the delivery driver rushed to A&E at Whiston Hospital with wife Susan Martin – with doctors quickly realising there was something seriously wrong.

His heart rate was around 320 beats per minute, rather than the usual 85.

‘The doctors told me I had already had a heart attack and asked me why I had waited so long before coming in’, he said.

‘I was disgusted. It made me feel like delivering packages was more important than my health. I am not blaming them for me having a heart attack, but I feel like I could have died on that road and they didn’t care.’

Neil stayed in hospital for 10 days, undergoing extensive testing and being given medication to keep his heart rate under control.

After being stabilised, he was transferred to Liverpool Heart and Chest Hospital for an MRI scan before being sent home to recover.

An investigation has been launched by Deva, with a spokesman saying they ‘take the safety of the independent, self-employed contractors we engage with, very seriously’.

However, the company has offered a different version of events, saying: ‘As soon as we learned Neil was unwell, one of our four standby contractors was sent to relieve him of the load and as far as we were concerned Neil had received the support that he had requested.

‘We were not aware that Neil had been left with packages. Had we been aware we would have immediately sent another driver to relieve him.’

The spokesman added Deva always has people on standby for illness, breakdowns or other issues.

‘A couple of days later our site manager texted Neil to see how he was. Neil explained what was happening, thanked the manager and a thumbs up emoji for getting in touch and would keep him informed on his progress’, he said.

Deva has also claimed Neil had called a manager ‘demanding money’ to prevent him speaking to the press.

The delivery driver denies this, while The Liverpool Echo reports they had already spoken to Neil at the time of the alleged threat.

A spokesman for Amazon said: ‘Safety is a top priority and we wish the delivery driver a speedy recovery. We have launched an immediate investigation with the delivery service provider who engages the driver.’