After Fleeing Poland, an Antiracism Activist Finds Refuge in Norway

The antiracism activist fled on New Year’s Eve in 2018 with his wife and toddler, seeking refuge in Norway, which has long welcomed political refugees from desperate corners of the world.

But the activist, Rafal Gawel, wasn’t escaping a war-torn country. He was fleeing Poland, a member of the democratic and peaceful European Union. Although his initial request for asylum in Norway was rejected, last month an appeals board there granted his request.

It was a dramatic chain of events that underscored concerns elsewhere in Europe that Poland’s democracy — once regarded as a great success story of the post-Soviet era — has regressed under the right-wing coalition that has ruled the country for the past five years.

While Mr. Gawel’s case is complicated, the asylum decision reflected worries about political influence in the Polish judicial system. Norway’s immigration service said it had granted him asylum on the grounds that he faced political persecution in Poland, a rare instance of a country in Europe offering such protection to a citizen of the European Union. Norway is not a member of the bloc, but maintains close relations with it.

A controversial and well-known artist and human rights activist in Poland, Mr. Gawel, 47, is a complicated figure at the center of an international tussle over democratic rights. He has had legal troubles in Poland, fleeing the country just before being sentenced to prison for two years for fraud and misappropriation of funds.

He says, without providing evidence, that the charges against him were an effort by Poland’s government to rein him in and that the trial was rigged.

The Polish government has noted that the fraud charges were brought against him under a previous, more centrist administration in 2013. And a nonprofit group in Poland funded by the financier George Soros has accused Mr. Gawel of mismanaging funds that it allocated to his organization, the Center for Monitoring Racist and Xenophobic Behavior. Those charges were used in the court case against him.

Mr. Gawel said that Poland’s government had targeted him over his work documenting a growing number of hate crimes in the country, and that it had ordered far-right militants to physically harm him. “The decision to grant me asylum saved my life,” he said in an interview.

The Norwegian appeals board that reviewed and approved Mr. Gawel’s asylum application concluded that the purpose of the court case was to curtail his activities, and that he might be in danger if he returned to Poland.

It found that Mr. Gawel risked “political persecution from government officials, under the cover and appearance of a criminal case where the purpose has been to limit his freedom of speech and activity by imprisoning him, and possibly also discrediting him.” The conclusion, which was not made public by Norway, was read out to The New York Times by Lukasz Niedzielski, Mr. Gawel’s lawyer.

Gunnar Ekelove-Slydal, the acting secretary general at the Oslo-based Norwegian Helsinki Committee, a human rights organization, said Norway’s decision was a clear sign of mounting concerns in Europe over democratic backsliding in Poland.

“The trust toward the Polish judiciary among European states is falling apart,” he said.

But Poland’s deputy minister of foreign affairs, Pawel Jablonski, said in an interview that Mr. Gawel’s conviction was based on criminal charges. “He was convicted by two courts,” the minister said. “We suspect that they might have been manipulated by his words,” he added, referring to Norway’s immigration services.

Poland has in recent years been at loggerheads with its partners in Europe over concerns that its democracy is being undermined by the right-wing coalition led by the Law and Justice Party that took power in 2015. The government has actively worked to limit freedom of speech and L.G.B.T.Q. rights — and has also weakened judicial independence, assuming greater controls over the prosecutor’s office and judges. 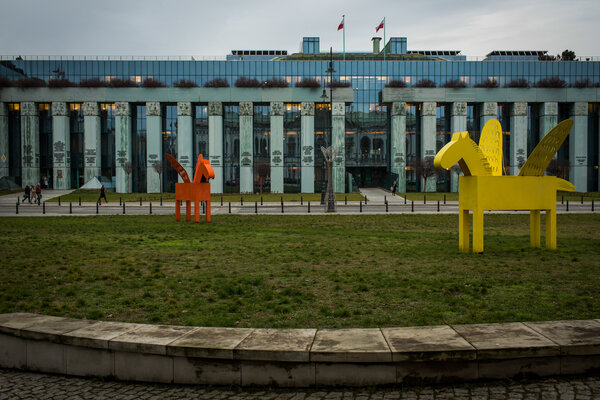 “The ruling Law and Justice government has used the past five years to put the judiciary under its control, raising serious concerns about the independence of courts, judges and prosecutors,” said Lydia Gall, a senior researcher on Eastern Europe at Human Rights Watch.

The European Union has imposed modest sanctions on Poland, and several of the bloc’s members have also taken individual actions in response. This year, Germany and the Netherlands refused to extradite Polish citizens who were under European arrest warrants to Poland over fears that they would not receive fair trials.

Human rights experts said that Mr. Gawel’s case was significant given how rarely E.U. citizens are granted asylum in other European countries. Of the tens of thousands of people to be granted asylum by Norway in the past decade, only 18 have been E.U. citizens, according to the country’s immigration statistics. One Pole was given asylum last year, according to official statistics, but the human rights experts said they were not aware of that case. Norway usually does not provide details about specific asylum cases.

Jakub Godzimirski, an expert on Polish-Norwegian relations at the Norwegian Institute of International Affairs, said that some Poles applied for asylum after the end of Communist rule in Poland in the early 1990s, but that most were refused.

“The threshold to get asylum from a European Union country in Norway is quite high,” he said.

In the interview, Mr. Gawel said he had left Poland by car even though his passport had been confiscated, and that the consular staff of a European country that he declined to identify had helped him and his family reach Norway.

Mr. Gawel said that he and his wife, Karolina Krupa, got married just days before fleeing. “We picked up the marriage certificate in the morning, just before leaving, and then got our car checked by wiretap and GPS experts,” he said. “We felt like refugees, and we were refugees.”

Norway initially rejected his asylum request, but he appealed the decision and was granted refugee status on Sept. 30.

In the interview, Mr. Gawel denied any wrongdoing and said he had presented the Norwegian immigration authorities with documents proving his innocence.

“I was targeted because my organization exposed ties between local authorities, government figures and far-right groups,” he said, adding that his group had lodged over 400 complaints about hate crimes committed in Poland this year.

Mr. Gawel had also been at odds with a nonprofit group operating in Poland. Ewa Kulik-Bielinska, the head of the Stefan Batory Foundation, an independent foundation established by Mr. Soros, said Mr. Gawel had misused the equivalent of $20,000 of subsidies that it awarded him.

Mr. Gawel attributed the incident to a difference with the foundation over the correct procedures for handling money.

The judge who sentenced him in 2019 said in her ruling that Mr. Gawel had used loans and donations for his own aims. “Disposing of public money requires transparency and honesty,” said the judge, Alina Kaminska, according to Polish news reports.

Mr. Gawel declined to show the documents granting him asylum when asked by The Times. The Norwegian Immigration Appeals Board confirmed that he had been granted asylum, but declined to comment on the specifics.

Mr. Niedzielski, his lawyer, said he hoped Norway’s decision would be “a game changer” in how European countries deal with Poland, although experts said it was unlikely to push the Polish government to change course.

But, said Mr. Ekelove-Slydal, from the Norwegian Helsinki Committee, “if such decisions are followed by concrete consequences, on economic cooperation or investments, then it could trigger new reflections on the courts in Poland.”

“Trust in Poland’s judiciary has been undermined,” he said, “which means that a fundamental pillar of European cooperation is threatened.”