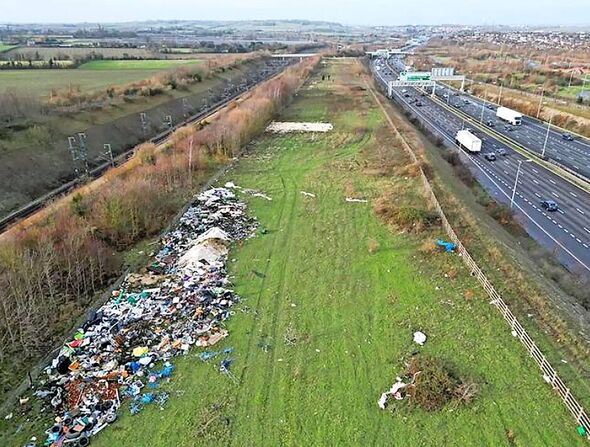 The suspects carried out the illegal dumping within site of the busy A2.

But they also kept pigs there to sell to nearby pubs offering hog roasts.

When the gang left the site they also abandoned some of the animals, allowing investigators to identify the suspects.

The waste was being dumped, burnt and buried on the National Highways land at Gravesend in Kent for several months, despite being visible from the major route linking London and Dover.

It is suspected a gang commandeered the site to allow local tradesmen to dump truckloads of commercial and building waste for cash to avoid official charges.

When Gravesham Council launched a probe last year officers found around 1,000 tyres, 1,000 tonnes of waste on the surface and evidence of yet more waste burnt and buried.

A source said: “As well as allowing the dumping, whoever was behind it was also keeping pigs there to do hog roasts at nearby pubs.”

“When they left the site, they left the pigs in a really bad state, but they made a mistake because some of the pigs still had ear tags which identified who they were registered to. That is how they identified the suspects.”

BK Waste Management Ltd has moved onto the site to start removing the waste.

“It is not just unsightly but is a threat to wildlife and the environment.”

“It can also be a safety hazard for drivers, can block drains, and clearing it up puts roadworkers at risk.”

On Thursday a debate in the House of Commons on illegal waste crime heard claims from MPs that it was a “serious issue” the authorities were not tackling despite suitable legislation being in place.

Kevan Jones, Labour MP for North Durham, said: “We have allowed criminals to benefit from the system. There are solutions to it but blind eyes have been turned by various government agencies.”