The Government is expected to announce all A-Level and GCSE pupils will be awarded teacher-assessed grades, after thousands of pupils were downgraded last week. A major announcement will be made at 4pm this afternoon by Education Secretary Gavin Williamson and exam regulator Ofqual. Last week the Scottish Government announced a similar u-turn, and scrapped its statistical model of determining grades in favour of those assessed by schools and teachers.

At a lobby briefing this afternoon, Boris Johnson’s official spokesman refused to rule out a u-turn on the matter.

He also sought to reassure students that GCSE results, due to be announced on Thursday, will go ahead as planned.

The official spokesman said: “We recognise that many people are concerned and anxious about the exam grading system.

“We will not be delaying GCSE results.”

It would be humilating for both the Prime Minister and Mr Williamson if a u-turn is announced, as both politicians defended how the results were calculated last week. 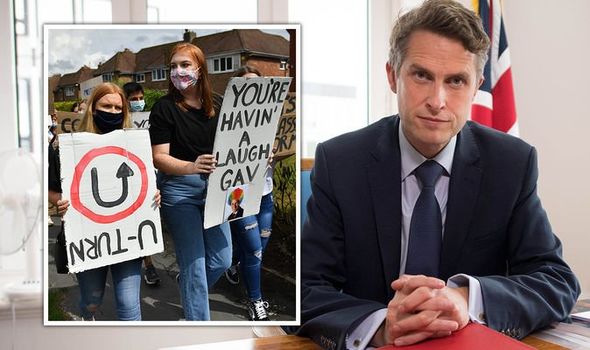 Mr Williamson said: “In Scotland you’ve got a system where there aren’t any controls, you’ve got rampant grade inflation.

“There’s been no checks and balances in that system; it degrades every single grade as a result and in-baked unfairness.

“If we see one year where you see the grade distributions so distorted and so changed then actually the value and the worth of what those grades are is damaged as a result of that.

“And when we look at future years, the children coming through next year doing their GCSEs, their A levels and their BTecs, they’ll be in a situation where their grades will look substantially worse off than the grades of the previous year.”

By his own admission therefore, this u-turn this afternoon “damages” results, “degrades every grade” and is “baked in-unfairness”.

Similarly, the Prime Minister said: “The exam results that we’ve got today are robust, they’re good, they’re dependable for employers.”

A-Level results day was last Thursday, where about of 40 percent of results were downgraded after Ofqual used an algorithm based on schools’ previous results.

Hundreds of students have protested against how the results were calculated, as they believe they were unfairly awarded.