LONDON — Just a few weeks ago, the BBC looked as though it had emerged from a season of storms. Prime Minister Boris Johnson’s Conservative government held off on threats to overhaul its finances, while its wall-to-wall coverage of the coronavirus pandemic served as a timely reminder of the value of a public-service broadcaster.

Now, though, an unsavory, quarter-century-old episode has thrust the British Broadcasting Corporation back into the vortex.

The trigger was the release this week of a report, based on an independent inquiry, which found that a BBC reporter, Martin Bashir, used deceitful methods to land a sensational interview with Princess Diana in 1995 and that his bosses covered up his actions for decades.

Mr. Johnson voiced deep concern; his ministers warned of fresh reforms; Diana’s sons blamed the broadcaster for playing a role in their mother’s untimely death; and the BBC’s executives and journalists offered apologies so fulsome and contrite that it seemed as if the entire institution had clad itself in a hair shirt.

Nobody is defending Mr. Bashir or the BBC’s actions — except to point out that Diana might have given the interview anyway, even if the reporter had not concocted phony bank statements to make an ally of her brother, Charles Spencer.

But the piling-on by the British establishment, and the BBC’s extravagant show of remorse, attest to the treacherous political and commercial crosscurrents that swirl around the broadcaster. More than ever, the BBC’s affectionate nickname among Britons, “Auntie,” seems like a relic of a bygone era.

“It’s tougher for the BBC because everything happens in London and under a microscope,” said Howard Stringer, a former president of CBS and former chairman of the Sony Corporation, who now lives in his native Britain. “In the U.S., you get pressure from Washington, but it doesn’t seem as intimate or dangerous.”

He said he understood the unreserved apology of the BBC’s director-general, Tim Davie. “I think he’s trying to put a wall up,” Mr. Stringer said, to shield current employees from a story that, though more than 25 years old, has been kept alive by Diana’s brother and a persistent British press. 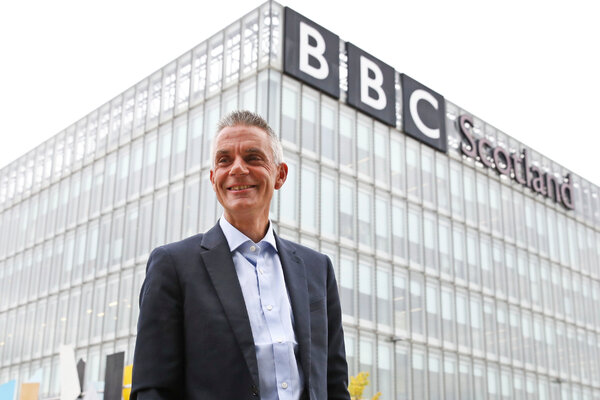 The problem is, the BBC is a sprawling institution — a “self-governing monastic statelet,” in the words of the Guardian columnist Simon Jenkins — and different parts of it are reacting in different ways. For example, the BBC’s media editor, Amol Rajan, declared on the main 10 o’clock news show Thursday that the incident had left the broadcaster “severely injured” and “probably scarred.”

Noting that the BBC had managed to offend the government, the press, talk-radio hosts, social media, the future king of England, Prince William, and his brother, Prince Harry, Mr. Rajan said, “For an organization that exists on the whim of public affection and respect, that is a dreadful place for the BBC to be.”

The criticism from William may have stung the most. The BBC will mark the 100th anniversary of its founding next year, and media analysts said it was desperate to repair its relations with the royal family before then.

Still, for all the hand-wringing and searing denunciations, it is not clear that the tempest will lead to major changes.

Oliver Dowden, the culture secretary, condemned “damning failings at the heart of the BBC,” and vowed to review the governance structure of the corporation. But in January, he announced the government would not proceed with perhaps its greatest weapon against the broadcaster: legislation to stop prosecuting people for failing to pay the compulsory license fee for the service.

“Decriminalizing” the license fee could cost the BBC 10 percent of its budget, which would force deep cuts in programming and staff. But under the current timetable for reviewing public-service broadcasting in Britain, the fee is safe until 2027, said Claire Enders, a London-based media analyst.

Moreover, the government has installed a director-general, Mr. Davie, and a chairman, Richard Sharp, who have ties to the Conservative Party and are viewed as more attuned to the sensitivities of 10 Downing Street. Mr. Sharp, a former Goldman Sachs banker and Conservative donor, has made staff at the BBC feel safer, according to Ms. Enders.

There are other reasons Mr. Johnson may feel less pressure to move against the BBC. His party recently won striking victories in local and regional elections across the Midlands and north of England. It did so largely without the help of pro-government papers owned by Rupert Murdoch and other publishers, who are hostile to the BBC and habitually lobby the government, after elections, to clip its wings.

Mr. Murdoch recently scaled back a politically opinionated news service that was going to compete with the BBC. While it still faces another rival, GB News, analysts question whether the new venture will have the money to compete, on a 24-hour basis, against an organization as entrenched as the BBC.

Even if the government is no longer as determined to cut the BBC’s finances, it has another incentive to keep up the pressure: to influence its news coverage. And in this, critics say, it has been quite successful.

While BBC programs like “Newsnight” and “Panorama,” which carried the Diana interview, continue to offer probing journalism, its general news coverage, some say, has become anodyne and does not challenge the government enough. While it has provided exhaustive coverage of the pandemic, for example, it rarely questioned the setbacks and reversals in Mr. Johnson’s early handling of the virus.

At times, the BBC seems to function mostly as a handy foil for the government in the culture wars that have flared across post-Brexit Britain.

Whether it is BBC hosts poking fun at an oversized Union Jack hanging in a minister’s office, or the refusing to broadcast the lyrics of a patriotic song, “Rule Britannia,” because critics view them as jingoistic, the government rarely passes up a chance to portray it as leftist and “wet,” British parlance for politically correct.

Still, for all its failings, the BBC remains trusted at home and a prized cultural export abroad — all of which suggests it will ride out the current tempest.

“While it’s clear the government welcomes the opportunity to make clear where they stand on issues like Britain’s imperial legacy or social justice, I’m not sure they’re interested in a complicated, structural reform of an institution that is broadly trusted by the British people,” said Rasmus Kleis Nielsen, director of the Reuters Institute for the Study of Journalism at the University of Oxford.