Retail sales rose above pre-pandemic levels in July as a rebound in demand continued, according to official figures.

The Office for National Statistics (ONS) said retail sales volumes rose by 3.6% between June and July.

It said sales are now 3% higher than February before the World Health Organization declared a pandemic and the UK was placed in lockdown. 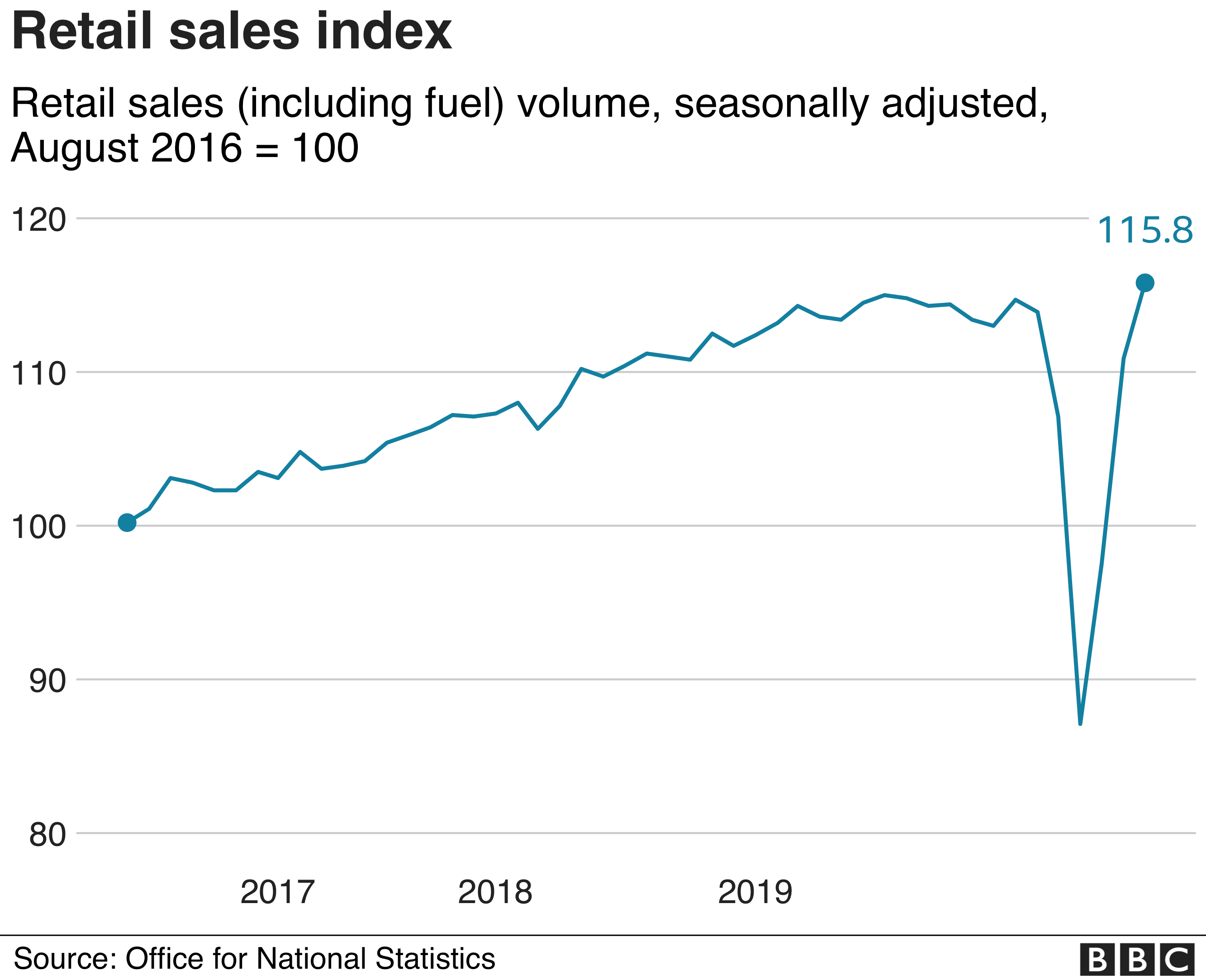 Meanwhile, activity in the UK’s manufacturing and service sectors during August grew at the fastest rate for nearly seven years, according to a closely watched economic survey.

The IHS Markit/CIPS composite purchasing managers’ index (PMI), which measures factors such as new orders and production, gave a preliminary reading of 60.3, the highest figure since October 2013. A figure above 50 indicates expansion.

IHS Markit said the growth in new orders was linked to the reopening of businesses, alongside “greater willingness-to-spend among UK households”.

But it said the companies it spoke to “continued to note that levels of demand remained well below those seen prior to the pandemic”.

July’s rise in retail sales was not as pronounced as the previous two months. In May, retail sales had increased by 12% and in June they had risen by 13.9%.

Sales in clothing shops grew by 11.9% last month while online shopping fell by 7%.

Ruth Gregory, senior UK economist at Capital Economics, said it suggested that “the recovery in physical shops was more impressive than the headline figure and that shoppers are starting to return to the High Street”.

However, the ONS said clothing shops had been “the worst hit during the pandemic” and the volume of sales remained 25.7% lower than in February.

While fuel sales rose by 26.2% between June and July, they remain far below pre-pandemic levels, down 11.7% compared with February.

“Recent analysis shows that in July, car road traffic was around 17 percentage points lower compared with the first week in February, according to data from the Department for Transport,” the ONS said.

While “the outlook could feel a little brighter for retailers”, said Emma-Lou Montgomery, associate director at Fidelity International, she also warned that the pandemic was “far from over”.

“With the UK now in a recession and many households likely to be tightening their belts as a result, spending on non-essential items may take a hit in the coming months, particularly as we approach the end of the furlough scheme in October.”

The retail sector has been one of the worst hit by the lockdown to stop the spread of the coronavirus.

Earlier this week, Marks and Spencer announced it would cut 7,000 jobs over the next three months.

The IHS Markit survey of manufacturing and services companies found that payrolls had shrunk.

“Concerns about the speed and duration of the recovery resulted in sustained job cuts across the private sector during August,” it said.

“In contrast to the positive trends for output and new orders, latest data indicated the fastest pace of decline in employment numbers since May.”

The UK recorded its first recession since the financial crisis when the economy shrank by a record 20.4% between April and June compared to the first quarter of the year.

A recession is defined at two consecutive quarters of shrinking gross domestic product. GDP fell by 2.2% in the first three months of this year.