Home » Business » Labor’s Hard Choice in Amazon Age: Play Along or Get Tough

Labor’s Hard Choice in Amazon Age: Play Along or Get Tough

It’s one of the most vexing challenges facing the labor movement: how to wield influence in an era increasingly dominated by technology giants that are often resistant to unions.

Are workers best served when unions take an adversarial stance toward such companies? Or should labor groups seek cooperation with employers, even if the resulting deals do little to advance labor’s broader goals?

The debate has flared up around labor’s efforts to make inroads with the likes of Uber and Airbnb, businesses that allow drivers and homeowners to earn income as contractors. And it was on vivid display in the political battle over Amazon’s plan to create a new headquarters in New York with 25,000 jobs.

The plan fell apart in the face of a backlash over public subsidies, resentment of the covert process in which the city and the state negotiated the deal, and concern about its neighborhood impact. But labor issues were also a factor, giving rise to tensions even among unions.

In the more confrontational camp were labor groups led by the Retail, Wholesale and Department Store Union, which called on the city and the state to withhold nearly $3 billion in subsidies unless Amazon established a “fair process” for its warehouse workers in the city to unionize. The retail workers said they were open to negotiating what that meant. 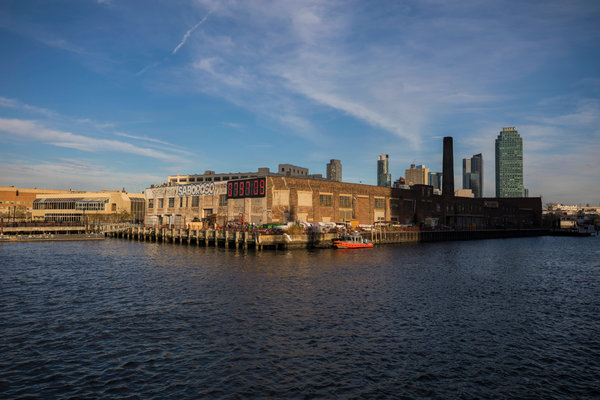 “I think we stood on principle,” said Stuart Appelbaum, the retail workers’ president. “If you’re aggressively anti-union, we shouldn’t be giving you subsidies.”

A company executive told the City Council last month that Amazon would not remain neutral in an organizing campaign at its local facilities, though an Amazon spokesman said this week, “We respect the rights of our employees to choose to join or not join a union.”

In the engagement camp was the local council of building trade unions, whose members were likely to get work from the construction of Amazon’s headquarters in Queens. They were joined by a Service Employees International Union local, which had gained the right to represent janitors and other service workers at the Queens complex.

“Their presence in New York — a progressive community, a union town — was eventually going to lead to some potential change down the road,” said Héctor J. Figueroa, the president of the service employees local, known as 32BJ. 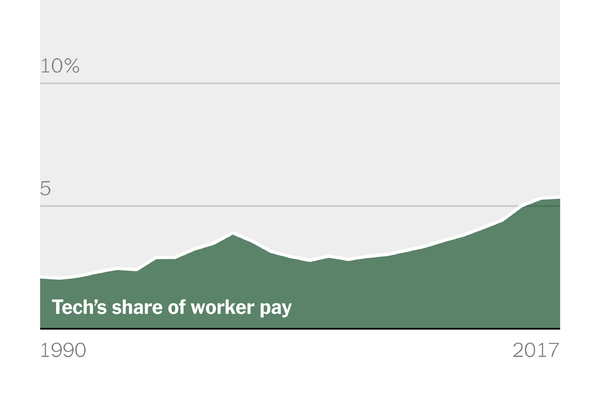 Even Without Amazon, Tech Could Keep Gaining Ground in New York

In terms of economic, political and cultural impact, the finance industry dominates. But tech is gaining fast, and is where much of the growth is.

In some respects, these arguments go back decades. Thomas Kochan, a management professor at the Massachusetts Institute of Technology, noted that the United Automobile Workers and General Motors negotiated a new arrangement when the company set up its Saturn division in the mid-1980s. In exchange for a role in managerial duties, the union agreed to forgo many of the work rules typical in other plants, such as those governing which worker could do what job. The arrangement stoked tensions within the union and the company for years.

But in recent years the growing reach of tech conglomerates has created urgency within labor to court their workers, Mr. Kochan said.

Despite their minimal presence in these companies, unions have a variety of levers to pull. They can exert influence through politicians when public subsidies are involved, as in the Amazon case. And they can pressure regulators to scrutinize businesses that upend traditional industries, like transportation and hospitality.

Whether to use these levers to force concessions, or to take a less adversarial approach that would give labor a foothold in big tech, has divided the labor movement.

In 2016, Uber reached a five-year agreement with a regional branch of the International Association of Machinists and Aerospace Workers to create a drivers’ guild, which would advocate on behalf of drivers but not challenge their status as independent contractors. The Machinists would also have to refrain from turning the guild into a formal union during that time. In exchange, Uber agreed to provide the organization with funding and a way to communicate directly with drivers. The guild says a majority of its revenue comes from other sources.

A rival group representing professional drivers criticized the Machinists for creating a so-called company union — federal law prohibits unions that companies fund or control, though the law applies only to workers who are employees. Some union officials complained that the guild was anti-democratic, since drivers hadn’t elected Machinists officials to represent them.

But Sharon Block, a senior Labor Department official under President Barack Obama, argued that the deal was defensible. Ms. Block pointed out that the guild had taken something of a hybrid approach between cooperation and antagonism, lobbying for policies such as a minimum earnings standard for drivers and allowing passengers to tip, both of which have been enacted in New York.

“There are situations in which taking the half loaf can be worthwhile,” Ms. Block said.

Around the same time, the Service Employees International Union was completing a deal with Airbnb in which the company would connect hosts who needed their homes cleaned with unionized workers, an approach that the two sides were already testing in New York and Los Angeles.

The agreement collapsed after a prominent hospitality workers union, Unite Here, protested that the deal would merely provide political cover to Airbnb, which the union accuses of destroying good-paying hotel jobs and creating housing shortages.

The union’s president, D. Taylor, said that Unite Here was always open to working with employers, but that unions typically lacked the clout to cut good deals when they wandered into an industry where their presence was weak.

“You’re settling a contract that has lower standards than the dominant union in that industry could get because you don’t have leverage,” Mr. Taylor said.

Given the number of people Amazon employs — more than 250,000 in the United States, not including seasonal workers — and its influence over numerous industries, the proposed New York headquarters arguably represented the highest stakes yet for a test of these competing approaches.

Some experts said a deal allowing a union to represent building-service workers at the proposed Amazon complex could have been valuable.

“They have the opportunity to show the people who work there at all levels that unionization is good,” said Catherine Fisk, an expert on labor law at the University of California, Berkeley. “That it’s a way to equitably allocate wages, that there is an orderly process for dealing with sexual harassment allegations, with issues about absenteeism — whatever the company is concerned about.”

But others were skeptical that allowing janitorial workers to unionize would have any benefit for the company’s broader work force in New York, much less anywhere else in the country.

The problem, said Ruth Milkman, a sociologist at the Graduate Center of the City University of New York, is that servicing buildings is just too far removed from what most Amazon workers do. Many companies have unionized building-service workers but are otherwise union-free, she said.

Like those companies, Amazon seemed intent on drawing the line at service workers: It walked away from discussions with labor about a framework that could have made it easier to organize employees who perform core functions, like packing goods at the company’s fulfillment centers.

The question is whether Amazon can sustain this hard line indefinitely. If it can, progressives and labor activists may have contributed to the loss of 25,000 jobs and billions in future tax revenue without winning any tangible benefits for workers.

But there is reason to believe that Amazon may have to bargain with labor in New York at some point, and that unions and other progressive groups will have established an important principle when that happens.

After all, many of Amazon’s facilities are not like automobile plants or call centers, in that the company can easily plunk them down anywhere. Amazon tends to locate warehouses reasonably close to customers, of whom there are potentially millions in the New York area. It has sought to put its white-collar hubs in areas with many high-skilled workers, a practice that also favors cities like New York.

In its statement about the demise of the Queens plan, the company noted that there “are currently over 5,000 Amazon employees in Brooklyn, Manhattan and Staten Island, and we plan to continue growing these teams.”

And that logic is likely to apply to a variety of tech companies that seek customers and workers in liberal hubs.

“You don’t have huge numbers of highly educated people who they need who want to move to small cities in Arkansas,” Professor Fisk said. “I think California and New York and a lot of other places may have more leverage to insist on the high-road approach.” 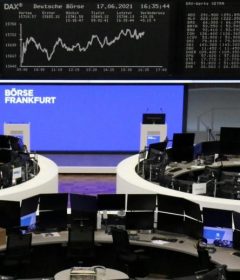