Mohammad Ahmed has been selling kites for the past 11 years, and he says he has never seen it so busy.

Sales at his shop in Delhi have soared over the past six months – thanks to coronavirus.

“I am tired of taking phone calls,” he says. “Suddenly everybody has needed kites. I am still getting calls from all over the country – Maharashtra, Tamil Nadu, Rajasthan… There is still so much demand that I am not able to fulfil it.”

While Italians sang songs from their balconies and windows to boost morale when they were stuck at home due to Covid-19 restrictions, Indians flew kites from their terraces and roof tops. 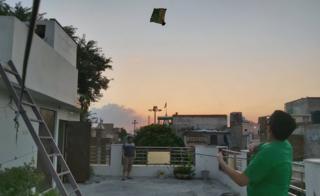 Ahsan Khan, a seller in Mumbai, says the country was at risk of running out.

“The period between April and August is usually the leanest [for kite sales],” he says. “But this year, I have sold about 500,000 kites [during that time].”

He adds that neighbouring Pakistan had also caught the kite-flying bug during its lockdown. “I am even getting calls from Karachi and Lahore in Pakistan, from people offering to pay me double the usual amount.”

Kite-flying has been a popular pastime in India for centuries, with historians saying that it was introduced to the country by Chinese travellers.

It is, however, usually a seasonal activity in India. In most parts of the country sales peak around the festival of Makar Sankranti – celebrated on 14 January to mark the beginning of spring and harvest season.

The tradition of kite-flying has long been associated with this festival, with the western state of Gujarat organising an international kite festival on the same day.

Preparations for this begin months earlier, with kite-makers from other parts of the country going to Gujarat, and the city of Mumbai, just to the south, to lend their expertise in making India’s traditional brightly-coloured paper kites.

Some other festivals, like Basant Panchami and Pahela Baishakh, keep up the demand in northern India until April, after which sales start to fall. They then recover just before 15 August when India celebrates its Independence Day.

But this year, the coronavirus lockdown has kept the kite industry very busy during its usual lean months. Even after the lockdown began being eased in stages from June to the end of August, children, mostly boys, kept the demand high as the schools remained shut.

“You couldn’t go out, you couldn’t take your children to the park, so people resorted to kite-flying to pass their time,” says Shahida Rehman, who manages a kite business with her son in Mumbai.

Although in one or two India cities and towns kite flying ended up being banned during the lockdown because authorities were concerned that neighbours all going out on their terraces could transmit the virus to each other, overall it was allowed and sales boomed.

The Indian kite-making sector was said to be worth $85m (£64m) in 2018. While it exports around the world, sales are dominated by the vast home market.

But while it is boys and young men who do most of the flying, the industry is heavily dependent on women workers. Tens of thousands of them, often accompanied by their children and other family members, work from their homes around the country, cutting, crafting and designing kites.

Hiba is one such manufacturer. She can make up to 50 kites per day with her sister at their home in the city of Bareilly, some 250km east of Delhi. The big rise in demand during the lockdown has boosted their income, as both the sales and prices of kites rose.

Mohammad Ashraf, a kite-seller in Bareilly, says that despite not being able to open his store in the early, most strict stages of the lockdown, he sold more than 200,000 rupees worth of kites before August.

“This year changed everything,” he says. “It has been an extra income bonanza.”

More from the BBC’s series taking an international perspective on trade:

Mr Khan says that sales have been led by India’s smaller cities and towns, as that is where more people have individual terraces or roof tops. This is in contrast to the big cities, like Mumbai, where most people live in flats and have to share such outdoor areas. These communal spaces were officially out of bounds during the lockdown.

Like all countries, India may now be at risk of returning to lockdown. This is especially true after the nation reported almost two million new cases in August, the biggest monthly number globally since the pandemic started.

While the health and safety of the population is obviously the main concern, kite flying is likely to remain a popular distraction for a great many people if they are forced to stay at home again.