Home » Business » Governments Malfunction and the Markets Place Their Bets

Governments Malfunction and the Markets Place Their Bets

The colossal disarray over the British government’s plans to leave the European Union comes at an awkward moment for global financial markets.

How can anyone in New York hope to make sense of the mess in London when the government in Washington is partially shut down, with no chance of reopening in sight?

Yet financial markets put a price on just about anything, and they don’t stop functioning when governments do. Bets on “Brexit” — Britain’s exit from the European Union — and on the government shutdown in this country are proceeding, regardless.

Whether these bets are humane or prudent is another question. But the shifting odds on Brexit have moved stock, bond and foreign exchange markets, especially in the past two weeks, as the government of Prime Minister Theresa May has flirted with disaster. As of Friday, at least, the markets had treated the shutdown in Washington as a minor event, though that could change at a moment’s notice.

But events in London have grabbed strategists’ attention. In a note to clients on Jan. 16, Capital Economics, a research group in London, said it placed a 70 percent probability on this broad outcome: that Britain finds a way to “fudge and delay” its exit from the European Union past the current March 29 deadline.

If that delay becomes certain, or just more likely than it seems now, Capital Economics said, the value of the British pound could be expected to rise. At the same time, British stocks, which have generally lagged behind the S&P 500 since the Brexit referendum in 2016, would probably surge, Capital Economics said.

Abrupt movements in foreign exchange markets have already occurred. The pound fell sharply on Jan. 15, when Parliament dealt Mrs. May a crushing defeat. By the largest margin ever for a major issue, lawmakers rejected the Brexit agreement she had spent months negotiating with the European Union.

But the next day Mrs. May survived a no-confidence vote, not by acclamation but by default: The opposition Labour Party simply could not muster enough votes to defeat her. She has soldiered on, as the Brexit deadline draws ever closer. Not incidentally, the pound has regained some of its lost ground.

March 29 remains a meaningful deadline. One way or another, Britain is scheduled to leave the European Union then. Yet lawmakers and Mrs. May’s government have been unable to agree on a course of action. To continue deliberating about what to do, they would need to ask the bloc for an extension, like a team of unruly students who cannot even agree on a topic as a term-paper deadline approaches.

Yet a delay is what most betting people think will happen, according to Capital Economics, which believes a negotiated settlement will, eventually, mitigate much of the harm that could be inflicted by an abrupt exit. This expectation is reflected in current stock, bond and currency prices, Capital Economics said.

Bettors have not ruled out a much more disruptive scenario that is viewed as a low-probability event — somewhere below 20 percent but above zero. That is Britain’s exit on March 29 without any negotiated agreement at all. 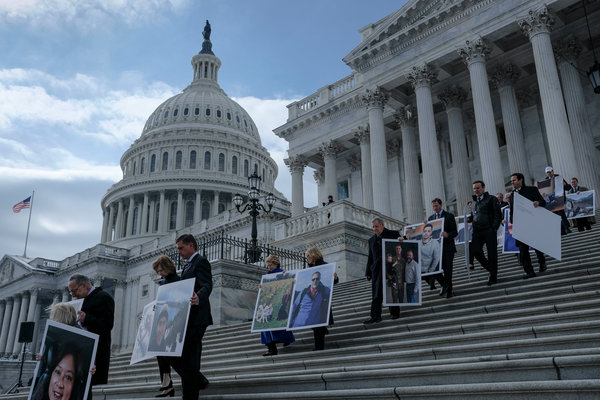 What would that mean? The Bank of England has boiled the probable effects down in straightforward and troubling terms. In a November report it projected that such a “no deal Brexit” would be a major shock that could subtract more than 10 percent from Britain’s gross domestic product.

Unemployment would soar, inflation would rise and Britain would fall into a serious recession, the central bank said. While the sun set on the British Empire long ago, the fallout of a calamity in Britain for the European Union, the global markets and the worldwide economy, would be significant, if less easily measured.

Goldman Sachs is less sanguine than rank-and-file bettors: In a report this month, it placed the odds that Brexit would be delayed at only 50-50. And, it said, “the distribution of risks around Brexit outcomes is widening.”

Goldman placed a 40 percent probability on the chance that Britain, in the end, would not leave the European Union at all, which would be accomplished through another referendum repudiating the original vote. The bank assigned a 10 percent probability to a no-deal Brexit on March 29, with potentially calamitous consequences.

For investors in the United States, Goldman produced a list of companies in the S&P 500 that derive considerable revenue from Britain. Buying shares of these stocks, or betting against them by shorting them, might be a handy way of using the American stock market to place a Brexit wager. The companies include Newmont Mining; PPL, a utility; and three financial services companies: Affiliated Managers; Willis, Towers, Watson; and Invesco.

Corporations active in Britain have been hedging against Brexit for months, of course, by shifting parts of their operations to places deemed more stable.

The latest to announce a move is Dyson, the appliances company privately held by James Dyson, an outspoken Brexit advocate. The company said this week that would move its headquarters to Singapore. In an article in The Telegraph, Mr. Dyson assured his countrymen that he was making this move because of Asia’s expanding place in the company’s global operations, not because of Brexit.

Whatever his reasons, most British residents can’t hedge against Brexit by relocating part of their households to another country. Instead, if the probability of a wrenching separation from Europe appeared to be rising, prudent people might take the steps that anyone does when a possible disaster looms: hoarding necessities like food, water and medicine; stocking up on cash and fuel; retreating to safer ground, if any can be found.

Such measures may be individual lifesavers, but when many people take them at once, they may make a crisis more severe, especially when confidence in government is ebbing.

Global markets shudder when panics start, which is why bets on potential crises are risky. And if this is true for Brexit, what can we say about the lengthening government shutdown in the United States, already the longest in history?

Financial markets have largely taken the shutdown in stride. Despite the pain inflicted on government workers and those who depend on them, economists have generally concluded that the effects will be transitory, if the shutdown ends soon.

But it has already lingered for an improbably long time, and political tensions in the United States remain high, amid a series of simmering crises that could easily unnerve markets. These include the trade conflict between the United States and China and America’s fraying relations with allies like Australia, Canada, France, Germany, Japan and Mexico.

Market calculations shift swiftly, and hedging against losses on multiple fronts could quickly become the order of the day.