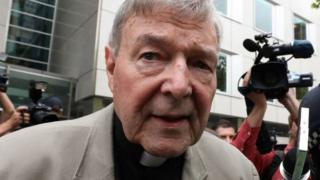 Cardinal George Pell is awaiting sentencing for sexually abusing two boys in 1996. The verdict, which he is appealing against, has stunned and divided Australia in the past week.

It has sparked strong reactions from the cardinal’s most prominent supporters, some of whom have cast doubt on his conviction in a wider attack on Australia’s legal system.

The largely conservative backlash features some of Australia’s most prominent media figures, a university vice-chancellor and a leading Jesuit academic, among others.

But critics of the backlash have raised concerns about its broader impact on abuse victims.

On Sunday morning at St Mary’s Cathedral, where Pell was Archbishop of Sydney for 13 years until 2014, parishioners were also maintaining their faith in the prelate.

A few metres away from a faded plaque of Pell, an elderly man clutching a handful of church leaflets declared that Pell was innocent.

It was all the result of a media beat-up, he told the BBC. Yes, the faith in the Church would be affected “but the Lord will not allow the Church to fail”.

Another man, Lynford Mitchell, said Pell was probably the scapegoat for the Australian Catholic Church’s sins – a popular view among those present on Sunday. “I mean, why would someone as prominent as him do something like this? It doesn’t make sense,” he said.

But another visitor to the church, Marianne Parry, said she was shocked by such claims.

“These victims have been to hell and back – some of them have not been able to continue living,” she said. “It’s heart-wrenching. If a jury has found him guilty, what sort of society are we to doubt that?”

Justice Peter Kidd, who presided over Pell’s trial, may have been anticipating this kind of backlash when he stressed last week that it was Pell – not the Catholic Church – who had been on trial.

It’s a message that some have challenged since.

Andrew Bolt, a prominent conservative columnist for News Corp Australia, has argued that Pell was the victim of an unprecedented miscarriage of justice, describing it as “our own OJ Simpson case, but in reverse”. He wrote: “A man was found guilty not on the facts but on prejudice.”

Another conservative commentator, Miranda Devine, described the verdict as personally “devastating”, and questioned not just the impartiality of the jury but the actions of police and liberal figures who had fuelled a “campaign of vilification” of the cardinal over two decades. He was being targeted because of his social conservatism, she added.

Following the jury’s verdict, Mr Howard, who has known Pell for about 30 years, submitted a glowing character reference to the court. It praised Pell’s intelligence, sincerity and “exemplary character”.

Such stances have caused profound hurt to survivors, says ABC journalist Louise Milligan, author of the book Cardinal: The Rise and Fall of George Pell.

“I’ve been contacted by many, many Australian Catholics who are devastated by the way the Church is handling this issue,” Milligan told the BBC.

Milligan said families were also furious that an article by prominent Jesuit priest Frank Brennan challenging the jury’s findings was being “handed out to their children in school”.

She noted that during her own Catholic upbringing she had been “taught the principle of ‘love one another as I have loved you'”, adding: “That these people who describe themselves as Christians could do the very opposite – and not understand how profoundly hurtful this is to the victims – is astonishing to me.”

Aspects of the pro-Pell supporters’ arguments have found some weight with law experts, however. Prof Jeremy Gans, a University of Melbourne criminal appeals and procedure expert, says Pell’s lawyers have a chance of winning an appeal on the basis of unreasonableness.

This argument says the jury delivered a verdict that was not supported by the evidence.

Meanwhile Pell’s barrister, Robert Richter, said on Tuesday that he was too emotional and angry about the verdict to continue representing the cardinal, but would still help the defence team.

‘Ripping off scabs on our wounds’

Milligan says she is heartened, however, by a grassroots pushback, particularly from moderate Catholic clergy and parishioners all over the country.

An Australian Football League club, Richmond, has stripped Pell of an honorary position, while his former alumnus, Ballarat’s St Patrick’s College, will remove the cleric’s name from a building.

Sky News Australia took the unprecedented step of scrapping all advertising from Bolt’s TV programme to protect the reputation of brands being targeted by an activist group.

An online petition by writer Amy Gray – which aims to strip Pell of his Australian honours – has now attracted 40,000 signatures. Gray said she wanted to highlight the “rampant under-reporting, undercharging, and under-conviction” of sexual abuse in Australia and elsewhere.

Across Pell’s native state of Victoria, there have been celebrations but also fresh pain. One survivor of abuse by another priest said the support for Pell had “ripped off the scabs on our wounds”.

Leonie Sheedy, co-founder of survivor advocacy group Care Leavers Australasia Network (CLAN), told the BBC that it was a welcome vindication for many who had suffered abuse, but noted that many had died without seeing justice. Her brother, Anthony, died in 2011 after being raped by multiple abusers in a boys’ home as a child.

Like Ms Sheedy, abuse survivor Saundra has no closure. 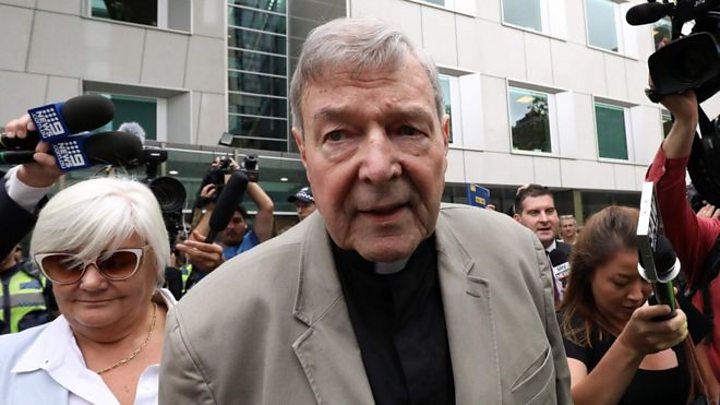 Her brother, who she believes was raped as a state ward, disappeared in 1965. Despite her efforts, she has not been able to track him down.

At almost 80, she’s not giving up her search for answers.

“There was no-one for us,” she said. “If we spoke up, we were beaten and told we were liars. Now they believe us. Well, some do – even though thousands of children were abused, all over the country. We can’t have all concocted stories.

“I was too shamed to tell my family for so many years. Now I’m speaking out for my brother.”