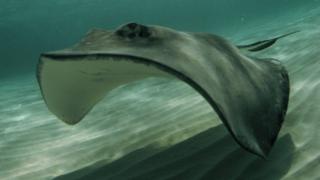 A 42-year-old man has died after a suspected stingray attack off the Tasmanian coast, Australian police say.

They said the man developed a cardiac arrest after “sustaining a puncture to his lower abdomen” at Lauderdale Beach.

The statement said the wound was “possibly inflicted by a marine animal”. Officials told local media it was consistent with a stingray attack.

Stingrays are not considered dangerous, even though one killed Australian conservationist Steve Irwin in 2006.

Known as the Crocodile Hunter after his wildlife television show, Irwin died when a stingray’s tail stabbed him in the heart.

There have been, however, more reports of shark attacks in Australia recently and the Tasmanian police were keen to stress the Lauderdale Beach incident was not shark-related.