With a stubborn Delta outbreak in Sydney, Australia, spreading in areas outside the city and in vulnerable Aboriginal communities, New South Wales officials announced a lockdown for the entire state on Saturday along with tightened restrictions for residents of Sydney.

The statewide stay-at-home orders, in effect for at least a week, reflect growing concern about virus clusters that appear to have been seeded from Sydney residents traveling outside the city in violation of a lockdown that began there seven weeks ago.

Several cases have emerged in Dubbo, an agricultural area, along with a handful in Walgett, a small town about 400 miles from Sydney that has a large and largely unvaccinated Indigenous population.

In all, New South Wales recorded 466 new local cases and four deaths on Saturday. Premier Gladys Berejiklian called the case numbers, which were the highest daily total since the pandemic began, an “extremely concerning situation” at a news conference Saturday morning.

“The Delta strain is diabolical, and we have to accept and be real about that,” she said.

Under the new rules for Sydney that were announced on Saturday, residents will need a permit to travel outside the city. Travel for exercise and essential shopping will be limited to five kilometers — about three miles — from home, and fines for violations that include lying to contact tracers have been increased to up to 5,000 Australian dollars ($3,685). Fines of 3,000 Australian dollars can now be delivered on the spot for breaching a rule that limits outdoor exercise to two people.

In smaller centers of population, schools will be closed as of Monday, and for at least seven days only essential businesses will be allowed to operate.

With Melbourne, Australia’s second-largest city, also in lockdown, more than half of Australia’s population of 25 million people is now required to stay at home as the country races toward vaccination for an escape. And the vaccination rate is increasing.

At the current pace, 70 percent of Australia’s population over the age of 16 will have received their first dose of a Covid vaccine by Sept. 25, with New South Wales on track to reach that milestone on Sept. 7. About 25 percent of adults are fully vaccinated nationwide and about 50 percent have received a single dose, according to the Australian government. 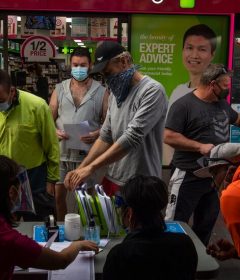