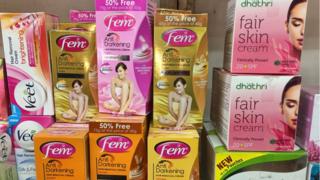 A 21-year-old Indian woman has allegedly killed herself because of constant harassment by her husband over her “dark complexion”, police said.

Police in Rajasthan state registered a case against the woman’s husband after her father complained that he was responsible for her death.

Police told BBC Hindi that no arrests had been made. The husband is yet to make a statement on the allegations.

Many Indians regard fair skin as being superior to darker tones.

The woman’s father told police that her husband used to “repeatedly humiliate her over her dark complexion”, which led her to kill herself.

This is not the first time that taunts over “dark complexion” have allegedly caused Indian women to take their lives.

A 29-year-old woman killed herself in 2014 after her husband taunted her over her skin colour, police said.

And in 2018, a 14-year-old girl took her own life, reportedly after her classmates bullied her and called her “ugly” because she was “dark”.

This tragic incident once again shows just how dangerous India’s obsession with skin colour is.

From a young age, girls with darker skin tones are called derogatory names. They are bullied in schools, on playgrounds, and even within homes, where unflattering comparisons are made with siblings who may have a fairer complexion.

In matrimonial columns, skin colour is almost always emphasised – prospective brides are described as being fair, wheat-ish, light or dark brown, but almost never as dark.

Popular media constantly reinforces that image with touched up photographs of actors and models.

And this makes many women with darker skin tones grow up feeling inadequate, even ugly.

Rules bar commercials from showing people with darker skin colour as unattractive or unhappy, and in recent years advertisements have become a bit more subtle but, at the end of the day, the message they still give is that fairer is better.

In the past few years, there have been some counter-campaigns calling people to celebrate dark skin, but clearly a lot more needs to be done to increase the reach of this message.

Until that happens, such discriminatory attitudes will continue to ruin lives.

If you’ve been affected by a mental health issue, help and support is available. Visit Befrienders International for more information about support services.

3-line MRT fault: A timeline of what happened on Oct 14