Home » Asia » Why are the UK and China arguing about Hong Kong?

Why are the UK and China arguing about Hong Kong? 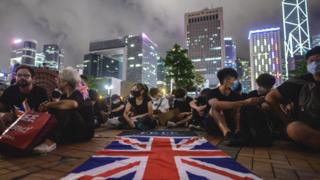 Hong Kong is at the centre of a diplomatic row between the UK and China.

The UK has shown support for pro-democracy protesters in Hong Kong, a former colony. It says the “one country, two systems” approach – giving Hong Kong citizens different rights and laws to those on the Chinese mainland – must continue.

In response, China has accused the UK government of meddling in internal affairs.

What has been happening?

There have been mass protests against an extradition bill.

It’s a piece of legislation that was introduced by the city’s pro-Beijing leader Carrie Lam. It would make it easier to transfer people to face trial in China (and elsewhere in the world).

Demonstrators argue it threatens Hong Kong’s autonomy (its right to rule itself) and undermines its independent legal system. They fear China could use it for political reasons.

Following the widespread protests the bill was suspended, but not withdrawn.

The UK’s foreign secretary Jeremy Hunt condemned violence by protesters, but said China could face “serious consequences” if it uses violence to crack down on them.

China’s UK ambassador Liu Xiaoming said relations between the UK and China had been damaged by Mr Hunt’s remarks. He accused the UK of being “hypocritical”.

Why does the UK have a role in Hong Kong?

Hong Kong was under British control for 156 years, following a war with China. Then, an agreement in 1898 meant that the territory would be leased to the UK for 99 years.

In 1984, then prime minister Margaret Thatcher signed the Joint Declaration with the Chinese government.

In it the two countries agreed that Hong Kong would be handed back to China in 1997, on a number of conditions. These included the region’s high level of autonomy and maintaining certain rights not granted in mainland China.

It was also agreed that Hong Kong’s capitalist system, which was different to China’s communist model, would continue.

The agreement would be in place for the following 50 years – that’s until 2047.

Mr Hunt has said that the letter and the spirit of the agreement must be honoured.

The UK also has an interest in Hong Kong because 300,000 UK nationals live there.

More generally, the government wants to be seen to support democracy.

What does China say about the UK’s demands?

The debate is around whether the Joint Declaration is still valid. China says it is merely a historical document.

Chinese officials say Hong Kong is governed by the constitution it adopted at the handover in 1997. This is known as the Basic Law, which outlines the territory’s “one country, two systems” arrangement.

However, the UK says the treaty is legally binding. The UK and China have disagreed on this for a number of years.

What could the “serious consequences” for China be?

It’s not clear – and that’s the point.

Mr Hunt has said that all options are on the table, and didn’t rule out expelling Chinese diplomats, or sanctions.

He said this was a form of “strategic ambiguity” aimed at deterring China.

But a heavy-handed response seems unlikely, partly because the UK is looking to boost economic relations with China and signed a trade agreement last month.