What Do North Korean Gymnastics Say About Kim Jong-un’s Politics?

HONG KONG — For North Korea experts, virtually every detail in the authoritarian state is a potential window into the political priorities of its elusive leader, Kim Jong-un.

A mass gymnastics performance that ended in North Korea on Sunday, after a nearly two-month run, was no exception: Unlike in previous years, this year’s edition was said to highlight recent changes in Mr. Kim’s posture toward China, South Korea and the United States.

Jump Around Dept.: What Are the Mass Games?

This year’s Mass Games gymnastics bonanza, which began in early September in the capital, Pyongyang, was the first edition of the event since 2013. Along with a military parade in September, it marked the 70th anniversary of the founding of North Korea.

The performance, “Glorious Country,” featured about 17,000 schoolchildren who formed a “human-pixel” backdrop with colored cards in the stands, plus thousands of performers on the arena’s floor, according to Andray Abrahamian, a fellow at Stanford University and the author of a book on North Korea who attended the show in September.

A banner at the show also read, “From now, a new history begins.” Mr. Abrahamian said that was an apparent reference to an April declaration by Mr. Kim and President Moon Jae-in of South Korea, in which the two leaders agreed to work to remove all nuclear weapons from the Korean Peninsula and, within the year, pursue talks with the United States to declare an official end to the Korean War. 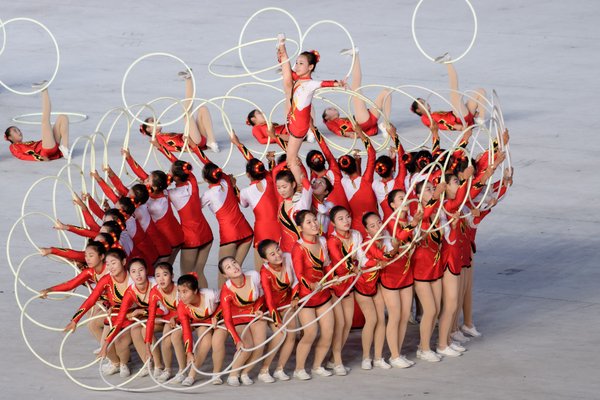 The choreography of this year’s Mass Games presented the Kim regime’s vision of its own history, in keeping with the style of previous years. Yet it also told “a significantly more positive, forward-looking and less militaristic tale” than the 2013 edition, Mr. Abrahamian wrote in a commentary on the website 38 North.

And unlike previous shows, he added, it did not include a single image of a missile.

Nancy Snow, a North Korea expert at Kyoto University of Foreign Studies and a former State Department official in the Clinton administration, said the lack of militaristic symbols at this year’s event might reflect Mr. Kim’s growing awareness that reprising the missile tests of 2017 would probably not help his regime’s international image.

“I don’t think he’s going to give up his weapons anytime soon, but slowly, surely, they’re going to introduce themselves more to the world,” she said. “And this is one way they do that.”

A New Face: Xi Jinping Depicted for the First Time

This year represented the first time that a rendering of President Xi Jinping of China was featured at the games. His portrait appeared on the human pixel board at the show’s finale on Sunday, when a delegation of well-known Chinese singers, actors and other artists were in the audience, according to NK News, an independent news site covering North Korea.

“Given how inimitably serious the North Koreans are about their two prior leaders, framing Xi Jinping that way can only be read as a signal of extreme respect,” Mr. Abrahamian said in an email. “It is nearly reverent.”

Mr. Abrahamian said he read the gesture as a dramatic step in North Korea’s “assiduous fence-mending campaign” toward China — five years after relations between the neighboring countries were strained because of North Korea’s 2013 nuclear test and its purge of Jang Song-thaek, Kim Jong-un’s uncle, who had wielded significant influence over North Korean coal exports to China.

During a September performance of “Glorious Country,” Mr. Moon, the South Korean president, appeared beside Mr. Kim at the games and addressed the audience, according to the Yonhap news agency.

“I propose that we should completely end the past 70 years of hostility and take a big stride of peace to become one again,” Mr. Moon said at one point in his speech, which was also broadcast live in South Korea.

Mr. Abrahamian said the speech could be seen as a “semiformal” acknowledgment by North Korea of Mr. Moon’s authority, as well as a sign that Mr. Kim trusts Mr. Moon to “deliver a message that was not too provocative and would keep the inter-Korean relationship moving forward in a way both leaders found agreeable.”

But it was also notable, he added, that Mr. Moon’s image was shown in a video as he stood with Mr. Kim — and not in the same “iconic” portrait style reserved for Mr. Xi.

Reading Between the Lines: A Message for Trump?

Soo Kim, a former North Korea analyst at the Central Intelligence Agency, said that the public display of support for China at the Glorious Country games was a signal to Washington that Beijing would probably take Pyongyang’s side in negotiations over the North’s nuclear program “when push comes to shove.”

Mike Pompeo, the United States secretary of state, is scheduled to meet with North Korean officials in New York later this week, and Ms. Kim, the analyst, said that the Kim regime was probably trying to express its dissatisfaction with how the nuclear talks have stalled.

“This is not only frustrating for the U.S. and South Korea; it’s also not where Kim Jong-un would like to be,” she added. “The U.S. and North Korea have been going back and forth, with neither side willing to budge over denuclearization, easing of sanctions or even a declaration to end the Korean War.”