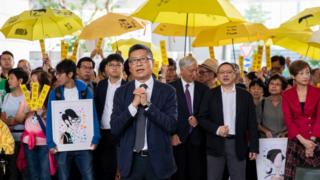 Nine pro-democracy activists in Hong Kong have pleaded not guilty in a trial seen as a test of judicial independence from Beijing.

They have been charged with “public nuisance” over the 2014 “Umbrella” movement that demanded Hong Kong choose its own leader.

Three of those accused founded the civil disobedience movement before student groups joined in.

At its peak, thousands of protesters paralysed parts of the city for months.

The charges carry jail terms of up to seven years.

The trial has been described as “politically motivated prosecution” amounting to “an attack on free speech and peaceful assembly” by rights group Amnesty International.

It was in reaction to a decision made by China that it would allow direct elections in 2017, but only from a list of candidates pre-approved by Beijing.

Many people in Hong Kong believe they should have the right to elect their own leader.

A year later, the three activists’ call for non-violent civil disobedience joined with student-led protests and snowballed into the massive demonstrations.

The prosecution in this trial argued these demonstrations caused “common injury done to the public”, by locking down parts of the city-centre

The protests became known as the Umbrella movement after people used umbrellas to shield themselves from tear gas fired by police to disperse the crowd.

China and Hong Kong have a “one country, two system” agreement, with freedom of speech and press freedom among the key liberties that set Hong Kong apart from the mainland.