Typhoon Rai intensifies to Category 5 storm as it slams Philippines

Rai, the 15th typhoon to enter Philippine territory this year, hit the holiday island of Siargao in the southern province of Surigao del Norte, packing maximum sustained winds of up to 195km per hour, the Philippine weather bureau said.

Close to 100,000 people have fled their homes as the second-most powerful typhoon to strike the nation this year dumped heavy rains on southern islands on its way towards the central part of the archipelago.

The nation’s disaster agency said it had received reports of power outages and flooding in some areas, but that there had been no casualties so far.

Footage shared by the Philippine Coast Guard showed rescuers wading through chest-deep waters in the city of Cagayan de Oro on the northern coast of Mindanao, while ferrying residents in rubber boats.

“Filipinos are tough, but this Super Typhoon is a bitter blow for millions of people who are still recovering from devastating storms, floods and Covid-19 in the past year,” Philippine Red Cross Chairman Richard Gordon said in a statement on Thursday. 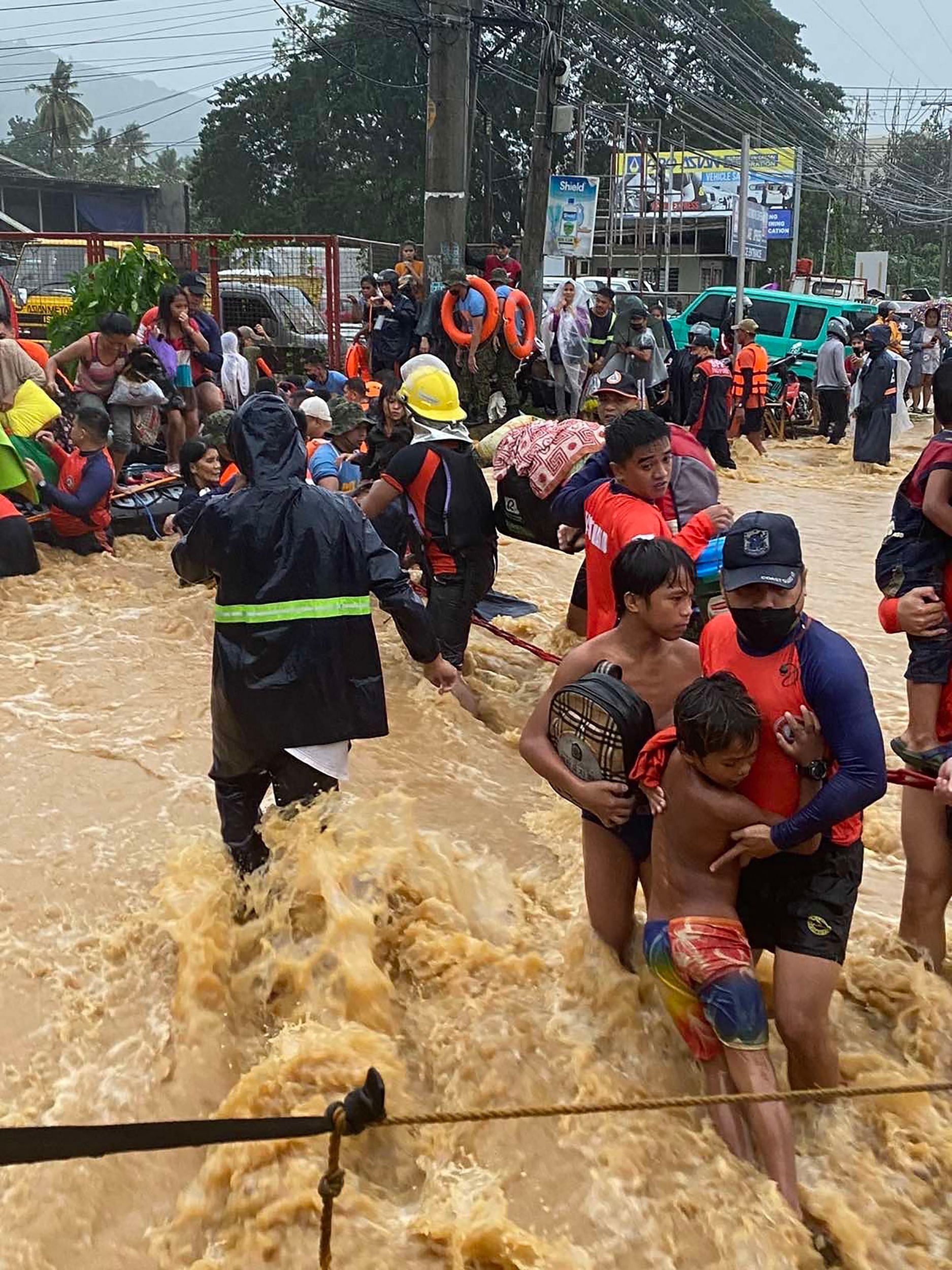 Photos from Surigao showed a sports complex that was being used as an evacuation centre, with plastic tents set up in a large hall and families asleep on rugs and tarpaulin sheets on the floor.

In the Eastern Visayas region, more than 45,000 people were evacuated to government shelters, CNN reported.

“We are getting pounded already by strong wind and rain,” Governor Ben Evardone of Samar province in Eastern Visayas said.

Crowding in evacuation centres was complicating efforts to keep people safely distanced amid the pandemic, after authorities detected the Philippines’ first Covid-19 infections caused by the Omicron variant a day earlier.

“It’s impossible to observe social distancing, it will really be tough,” Mr Evardone told The Associated Press. “What we do is we cluster evacuees by families. We don’t mix different people in the same place as a precaution.”

Authorities postponed the start of a mass vaccination drive against the coronavirus across most of the country because of the storm.

Airlines cancelled dozens of flights, while transport authorities banned sea and land travel in some parts of the country.

The Philippine coast guard said it had grounded all vessels, stranding nearly 4,000 passengers as well as ferry and cargo ship workers in dozens of southern and central ports. Schools and workplaces were also shut in the most vulnerable areas.

Around 20 tropical storms a year strike the Philippines, a nation of more than 7,600 islands, causing floods and landslides. In 2013, Super Typhoon Haiyan killed more than 6,300 people.

The Philippines has incurred US$10 billion (S$13.6 billion) in losses from climate-related hazards over a decade, the Finance Department said this year.