Annual vigil to remember 1989 crackdown is usually attended by thousands, but has been banned because of coronavirus. 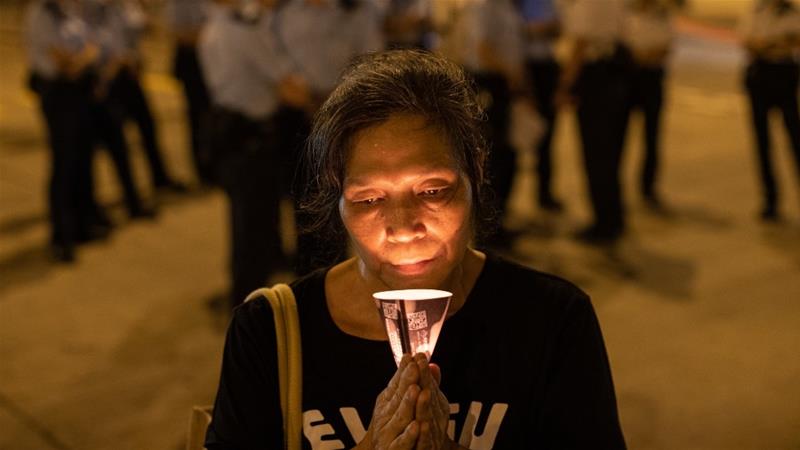 People in Hong Kong are set to commemorate the 1989 Tiananmen Square massacre by lighting candles in small groups after police banned the annual memorial because of coronavirus and said 3,000 riot police would be deployed to head-off any gatherings.

The anniversary is taking place after almost a year of sometimes violent pro-democracy protests and as the legislature meets to vote on a bill that would criminalise “disrespect” for China’s national anthem. China’s move last month to impose new national security legislation on the territory has only heightened tensions in the semi-autonomous territory.

In past years, the candlelight vigil has drawn tens of thousands of people to the city’s Victoria Park. With this year’s ban, organisers have called on people to gather in groups of no more than eight people to remain within the coronavirus rules on gatherings.

Calls online have urged people to light candles in specific places throughout the evening and then “where you are” at 8:00pm local time (12:00 GMT), followed by a minute of silence.

Some people gathered to light candles on Wednesday night, while others held aloft neon lights depicting the date of the crackdown in roman numerals.

“Police will observe and enforce the law as the situation requires,” the South China Morning Post quoted an unnamed high-ranking officer as saying.

Police have said a mass gathering would pose a threat to public health at a time when the city has reported its first locally transmitted coronavirus cases in weeks.

Malissa Chan, a 26-year-old who works in the property sector, told Reuters she would go to the park anyway.

“When authorities want to suppress us, there are more reasons to speak up,” she said.

About 2,000 officers will be deployed on Hong Kong Island with two water cannon stationed around the government complex and the Beijing liaison office, which have attracted protests previously. The remaining officers will be across the harbour in West Kowloon.

Hong Kong’s assembly is due to sit from 11:00am local time (03:00 GMT) for the third reading of the contentious bill on China’s national anthem, The March of the Volunteers.

With social distancing measures allowing for religious gatherings under certain conditions, some people plan to commemorate the Tiananmen crackdown in churches and temples. Residents are also expected to lay flowers along a waterfront promenade, while some artists plan to stage short street theatre plays.

Hong Kong has banned gatherings of more than eight people, a public health measure authorities insist has no political motivation.

China has never provided a full accounting of the 1989 violence, but rights groups and witnesses say thousands of people died when the military cleared the square of pro-democracy protesters who had been camped out there for weeks.

The death toll given by officials days after the crackdown was about 300, most of them soldiers, with only 23 students confirmed killed.

The event has been all but erased in mainland China, with Hong Kong’s vigil the most significant commemoration of the massacre anywhere in the world. The ban means it is the first time since 1990 that it has not taken place.

The legacy of Tiananmen Square