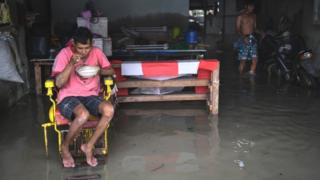 Thousands of people in southern Thailand are emerging from shelter after the region’s worst storm in 30 years passed into the Andaman Sea.

Storm Pabuk left Thailand at about midnight GMT on Friday after causing widespread flooding and blackouts. One fisherman died and one is missing.

The main tourist islands such as Koh Samui were spared the worst.

Flights and ferries are now resuming but tourists face delays due to a backlog of services.

The latest information on Tropical Storm Pabuk puts its peak wind speed at about 65km/h (40mph).

It passed over the coast of eastern Thailand near the island of Ko Phra Thong at 07:00 local time on Saturday (00:00 GMT), heading towards the Andaman and Nicobar Islands.

It left behind a swathe of downed power cables and forced some 30,000 people into evacuation shelters.

Warnings of flash floods are still in force.

The fisherman died when his boat capsized early on Friday in southern Pattani province, with another crew member still missing.

There are unconfirmed reports a man also died when a tree hit his home in Nakhon Si Thammarat.

The main tourist islands of Koh Samui, Koh Phangan and Koh Tao were spared the full force of the winds and rain.

Koh Samui district chief Kittipop Roddon said: “There were no casualties, there is some sunshine today and I’m confident some tourists will be able to leave.”

Koh Phangan district chief Krikkrai Songthanee said: “It’s all over. All 10,000 tourists are safe… I am relieved.”

Thousands of tourists had left before the storm it. 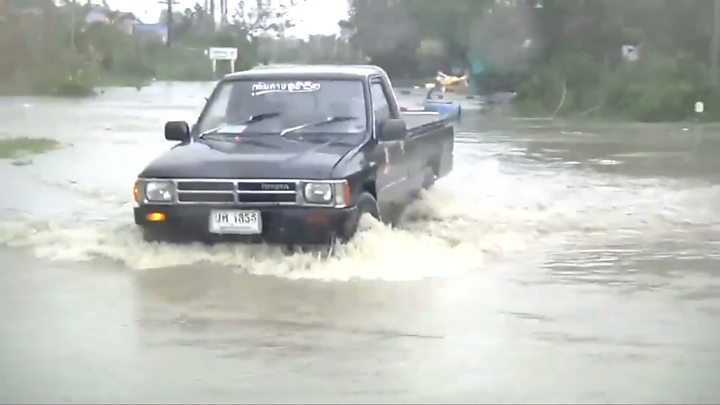 Airports and ferry services, closed during the storm, are reopening although some “red flag” bans on swimming were still in force.

Pabuk made landfall on Friday afternoon in Nakhon Si Thammarat province, leaving about 200,000 people without electricity. Some 30,000 had not been reconnected by Saturday.

One resident of Talum Puk, Boonchuay Chuaysri, told Agence France-Presse: “The roofs on some rooms in my house are gone. The house is filled with mud.”

As Pabuk headed out to sea, the Thai Meteorological Department warned ships to keep to shore.

“Strong winds are forecast with waves up to 3m-5m high in both the Gulf and in the Andaman Sea,” it said.