Michelin star fails to save restaurant 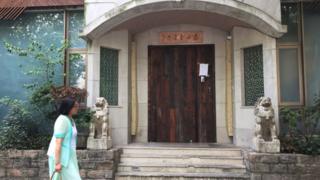 A Shanghai restaurant has closed down a day after being awarded a Michelin star, reportedly because it lacked the necessary licences to operate.

The Taian Table, which opened in April and served Western dishes, was described by Michelin as “graceful” and praised for its “clever recipes”.

But neighbours living above had complained of kitchen smoke and noise.

The restaurant – one of 26 in the city to gain a star in the guide’s first China edition – said it would relocate.

“Our idea and concept was to build a small place to entertain our friends and to have some foodies and chef friends around to create new and imaginative dishes,” Taian Table said in a statement.

It added that it had never intentionally violated any rules.

The restaurant apologised to diners who had booked tables and said it was moving to bigger premises and would apply for all required licenses.

Residents told AFP news agency they had petitioned to have the restaurant closed down.

“The noise is always there, with the stereo subwoofer vibrating. It’s so hot where we live, but we can’t open our windows,” said Zhang Fuzhen, who lives in the building.

It was run under the direction of German chef Stefan Stiller, who has previously opened a series of restaurants in the city.