Home » Asia » India’s Going to the Moon, and the Country Is Pumped

India’s Going to the Moon, and the Country Is Pumped

Like so many other middle schoolers, Veronica Sodhi, a 12-year-old with big dreams, says space class is her favorite subject, but on Friday there was something even more special.

India is all set to send a robotic rover to rumble around the south pole of the moon, a huge leap forward for its space program. The rocket launches at 2:51 a.m. Monday and the anticipation is stoking national pride.

Indian kids are sending good luck YouTube messages to the national space agency; V.I.P.’s are converging on the launch site in a remote coastal area near Chennai; the little six-wheeled rover is crawling across the front pages of all the newspapers; and telecasters are tapping the patriotism with special broadcasts on “India’s Greatest Space Adventure.”

At the K.R. Mangalam World School near New Delhi, a place for the children of the upper middle class, there’s a roller rink on the ground floor, Veronica and her classmates were pumped. 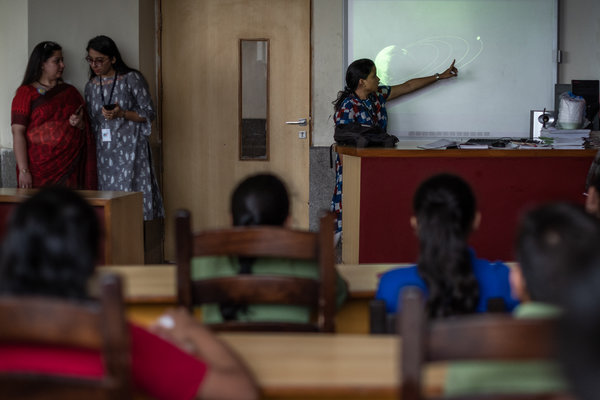 “Children,” asked Harjeet Kaur, the space class teacher, “why did we name this mission ‘Chandrayaan’?”

Veronica shot up from her desk so fast she nearly knocked over the chair behind her.

“Because-it-means-moon-and-vehicle,” she said in one breath.

“Everybody clap for her,” the teacher said. “Is there another country that has sent a mission to the moon’s south pole?”

”No!” the kids shouted back.

“We are all proud Indians, right, students?”

“It would be really cool to walk on the moon,” Veronica whispered a little while later. “I mean, kind of like hiking but really cool.”

A moon mission is a bold move for any country, but especially for one that has hundreds of millions of people still stuck in poverty.

But this is the puzzle of India. It is also a hotbed of modernity, a fount of scientific and engineering prowess. Its software developers are known as some of the world’s greatest, and each year its universities pump out thousands of highly talented scientists and engineers, experts in the most cutting edge technologies.

A big reason Prime Minister Narendra Modi, who won a thumping re-election in May, is so popular is that he has been pushing a brawnier, more assertive India, hungry to claim its place as a superpower.

Just weeks before the election began— and commentators found the timing a little suspicious — Mr. Modi announced that India had just shot down a satellite whizzing 17,000 miles per hour 150 miles above Earth. Few countries can do that.

This isn’t even India’s first moon mission. In 2008, the lunar probe Chandrayaan I didn’t land, but discovered water molecules on the moon.

The moon is definitely enjoying a bit of a renaissance on Earth. China is working on its own mission to the moon’s south pole. Scientists believe there might be a lot of water ice down there and Helium-3, a future energy source thought to be abundant on our little neighbor.

Many Indians feel this mission, which will unfold more than 200,000 miles away, is a turning point in their country’s history. They use almost the exact same words to describe Chandrayaan’s importance: “We will now be the fourth space power!” They follow after the United States, Russia and China.

“India would like their little space in space,” said Sunita Nagpal, the principal of the K.R. Mangalam school.

To help raise the next generation of astronauts, and go beyond the standard government science curriculum (which one private school principal snobbily dismissed as written for a rickshaw puller’s son), many private schools looked for new ways to teach space.

Enter Space India. Formed in 2001, it is a for-profit education company that runs workshops, field trips and regular classes on astronomy, rocketry and space exploration, in both public schools and fancy private ones.

Many schools do not have their own space teachers and hire instructors from Space India,

which even runs overnight space camp at several locations far from any cities.

This week its lessons revolved around the moon and the Chandrayaan II mission.

The entire mission costs less than $150 million. The orbiter will conserve fuel by making ever-widening orbits around the Earth before being captured by the moon’s gravity and pulled into lunar orbit.

This takes much longer than the straight shot made by the Apollo missions, which cost billions (the fact humans were along for the ride wasn’t cheap either). Chandrayaan’s rover won’t be rumbling across the moon’s surface until September.

It’s hard to overlook the synergy with the 50th anniversary of the Apollo 11 mission, this July.

“But this is just a coincidence,’’ said Vivek Singh, a spokesman for the Indian Space Research Organization, India’s version of NASA. “We were late.”

The Indians wanted to launch two or three years ago, with a Russian rover, but when the Russians backed out they decided to build their own, which took some time.

The hardest part, everyone agrees, will be the soft landing. The plan is for a landing craft to lower itself from the orbiter and gently plop itself down on the powdery moon surface. Then the little six-wheel rover (which weighs about 60 pounds) will pop out.

When the Israelis tried to pull off a similar moon mission in April, it didn’t go so well. Communications sizzled out, leaving people gathered outside the control room with tears in their eyes. The lander had crashed.

To appreciate these difficulties, the kids in space class at K.R. Mangalam school were asked to make lunar landers out of Styrofoam bowls, with folded paper taped to the side to act as a shock absorber. The trick was to drop the bowls from their desks and have them land without the astronaut — a pen cap — falling out.

At space class at another Delhi area school, the kids built rockets out of plastic soda bottles. The style of teaching was the same, a very cheerful Socratic method, with another Space India instructor, Heena Bhatia, standing in front of the class shouting out questions and waiting for a rapid delivery of facts.

“You know the basic parts of the rocket? Who will tell me?”

One boy stood up and blurted out the info like verbal bullets.

“Everyone clap for Akshay,’’ the teacher beamed. “Now do you want to make your own rockets?”

“Sir will be giving you materials to make your own rocket,” the teacher said, gesturing to a man with tattooed forearms deep in concentration in taping together little fins — he was a Space India assistant.

All kids dream of the stars. But in New Delhi it’s often hard to see any.

That’s because the air pollution is so bad and the city lights are so bright. The result is a smudgy, opaque night sky.

“But up on the moon, it will be so beautiful,” Veronica said, her eyes glowing with that special 12-year-old light. “It will be so dark and quiet. There will be so many stars.”

“I don’t know why I’ve always had this interest in the moon,’’ she said. “But I do. I want to be close to it, not on YouTube, not on the internet. I’ve always dreamed of being an astronaut. I want to make my India proud of me.’’

Jeffrey Gettleman is the South Asia bureau chief, based in New Delhi. He was the winner of a Pulitzer Prize in 2012 for international reporting. @gettleman • Facebook