How an Afghan Political Crisis Derailed Payments to War Victims

KABUL, Afghanistan — The son’s grief was unbearable enough after his parents and three relatives were killed in an airstrike that errantly hit their car near the family farm.

But then came another ordeal for the son, Ghulam Mohaiuddin Rabani: the extensive paperwork for the promise of compensation from the Afghan government for the Jan. 30 airstrike. Such accidental death payments have become vital to the government’s outreach to families in an unending war.

When he visited the government offices in his province, Kunduz, he was told there would be no payment that day. He is still waiting.

For Mr. Rabani and thousands of bereaved families, things are not just unclear, but grim: For at least a year, the Afghan government has failed to provide funds, despite having the money for somewhere between 4,000 and 5,000 claims of civilian casualties in 2019 and 2020, Afghan officials and human rights groups say.

“There is a bottleneck for this right now,” said Syed Muzaffar Shah, the Afghan country director for Center For Civilians in Conflict, a nonprofit advocacy organization. “And I don’t think it’s a top priority for the government.”

After the United States began paying so-called blood money compensation following errant deaths in the war’s early years, the process was institutionalized by the Afghan government. The payments are often an acknowledgment that civilian victims are frequently family breadwinners — in a country where 90 percent of the population is estimated to subsist below the poverty line, with little or no official economic safety net.

Under the compensation program, which remains heavily funded by international donors, the Afghan government pays roughly $1,300 for every civilian killed in action by Afghan, American or insurgent forces, and $650 per wounded. The payments had become one of the few forms of justice an Afghan family could hope for when caught in the cross-fire. Even so, the payments were sparse, with families often not knowing how or where to press their claims.

Now the payments are simply jammed up altogether, with no public explanation.

Interviews with regional and national officials — some on the condition of anonymity because they were not authorized to talk publicly about the matter — portray a shoddy system that stalled during the bitterly disputed 2019 presidential election and has not been fixed. 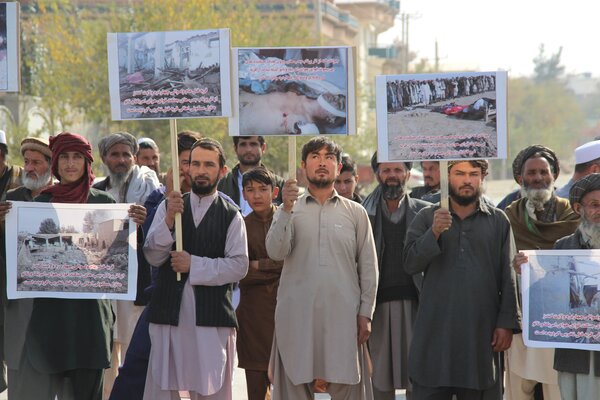 Before the election, the opposition candidate, Abdullah Abdullah, had served as the government’s chief executive, and his office had handled the death payments since 2014. But the office was dissolved after the election. When Mr. Abdullah and President Ashraf Ghani settled their monthslong political dispute with a new power-sharing deal, the death claims were transferred to the president’s administrative office.

But the administrative office has too few staff members to process the claims, leaving the system locked up, said a government official in Kabul with direct knowledge of the issue. The official’s assertion was supported in background interviews with other officials.

The need has seldom been greater. At least 2,100 Afghan civilians have been killed and 3,800 were wounded in the first nine months of 2020, according to U.N. report released on Tuesday. Violence has remained nearly as intense as it was last year despite the new peace talks in Qatar. From 2016 to 2019, the government paid roughly $4 million to families of the killed and wounded, but the officials said that nothing has been paid out since then, despite thousands of casualties.

“Our interviews with victims and their families reveal the near complete failure of parties to the conflict to acknowledge harm caused, nor even to make contact with them following an incident,” said Fiona Frazer, the U.N.’s human rights chief in Afghanistan.

Durani Jawed Waziri, a spokeswoman for Mr. Ghani who in recent days was promoted to the country’s National Security Council, disputed that the system is paralyzed. “The process of the cash assistance program to the victims has not stopped and the program is now implemented by the Administrative Office of the President,” Ms. Waziri said last month.

The payments, however, have still not gone through, according to interviews with other government officials in Kabul and in more than a dozen other provinces, and with families still awaiting aid.

It took trips to more than a half dozen local and provincial offices, he said, to prove that family members had died. That included reprinting identity cards (destroyed in the bombing) and finding five witnesses to confirm that his loved ones were real.

“God knows if the government will send us the payment or not,” Mr. Hassanzada said.

The payment ordeal worsened what already was one of life’s worst moments, Mr. Hassanzada said.

A culture of corruption has sprung up around the death payments. Mr. Hassanzada and others expressed reluctance to describe details to avoid jeopardizing their claims. But many said officials had been known to facilitate claims and simplify some paperwork if given cuts of the condolence payments.

Some described how an industry of death-payment brokers had arisen, offering, for a fee, to complete and obtain approvals of claims for families often unable to read and fill out the forms.

Frogh Jabbarkhel, the head of finance and administrative affairs for the Kunduz governor’s office, confirmed that around 300 people in that province alone have been awaiting condolence payments for more than a year. (Officials in many other provinces gave similar totals.) But he said he had not heard of any corruption in the payment process.

The United States has also maintained its practice of paying condolence money to Afghan families harmed during American military operations. It made more than 60 such payments to Afghan families in 2019, part of roughly $1.5 million that included compensation in cases of wrongful property destruction, deaths of civilians and to families of Afghan security force members killed fighting alongside U.S. troops.

But that program remains improvised, with no clear way to apply for the funds and disjointed investigations into civilian deaths. And as U.S. forces have withdrawn from the countryside, Afghans have found it increasingly difficult to directly contact American officials for help.

Some, though, get through.

Noor Mohammad, 32, lost his wife and all four children in Kunduz Province in March 2019 when his home was hit by a U.S. airstrike after American forces and Afghan troops opened fire on one another.

Mr. Mohammad, a day worker in Kunduz, drove an hour from his district to the airport on a stretch of road frequently attacked by the Taliban. The Americans gave him around 880,000 afghanis ($11,500) wrapped in thick brown paper, he said.

Mr. Mohammad’s quest for compensation was cataloged in a single, sterile, entry in a Pentagon spreadsheet that translated to the number of civilian deaths in 2019 the American military believes it was responsible for in Afghanistan: 108.

The United Nations assessed that the United States caused 546 civilian deaths from airstrikes in the same time frame.

Mr. Mohammad said he used the compensation to pay longstanding debts. But the money provided no closure for him.

“My pain and my wounds are very deep,” Mr. Mohammad said, “And this kind of wound cannot be cured.”

Reporting was contributed by Fahim Abed from Kabul, Asadullah Timory from Herat, Farooq Jan Mangal from Khost and Taimoor Shah from Kandahar.