Home » Asia » Have Three Children? No Way, Many Chinese Say

Have Three Children? No Way, Many Chinese Say

After China said it would allow couples to have three children, the state news media trumpeted the move as a major change that would help stimulate growth. But across much of the country, the announcement was met with indignation.

Women worried that the move would only exacerbate discrimination from employers reluctant to pay maternity leave. Young people fumed that they were already hard-pressed to find jobs and take care of themselves, let alone a child (or three). Working-class parents said the financial burden of more children would be unbearable.

“I definitely will not have another child,” said Hu Daifang, a former migrant worker in Sichuan Province. Mr. Hu, 35, said he was already struggling, especially after his mother fell ill and could no longer help care for his two children. “It feels like we are just surviving, not living.”

For many ordinary Chinese, the news about the policy change on Monday was only a reminder of a problem they’d long recognized: the drastic inadequacy of China’s social safety net and legal protections that would enable them to have more children.

On Weibo, users complained of mounting education expenses, sky-high housing prices and unforgiving work hours. They pointed out China’s shortage of child care services, which forces many young parents to rely on their own parents to watch their children.

“I recommend you first fix the most basic problems with maternity rights and the discrimination women will inevitably face in the workplace, and then encourage them to have children,” read the most popular comment under an article about the policy change by Xinhua, the state news agency.

Another commenter was more direct: “Get out of here! Will you help us take care of the kids? Will you give us a house?” 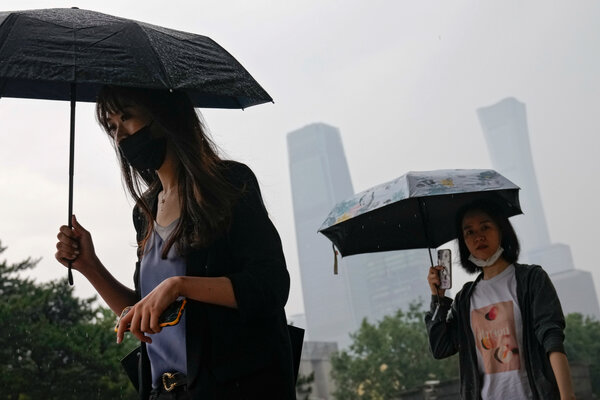 In response to a poll by Xinhua that was titled: “Are you ready for the three-child policy?” just a tiny fraction of respondents chose “I’m ready, I can’t wait.” Of roughly 22,000 people who had responded to the poll at one point, 20,000 chose “I won’t consider it at all.” The poll was quickly deleted.

In its announcement, the government promised to help families with education costs and child care, but gave little detail.

China has long promised to overhaul policies that affected families, but changes had been slow. The only real shift in the last five years, said Lu Hongping, a professor of population studies at Hebei University, had been a lengthening of statutory maternity leave to around 160 days in most areas. But even then, he said, it was too short.

“They haven’t done it well. Essentially, they haven’t done it,” Professor Lu said of the reforms. “And if it’s not done, then the costs are too high, and many people will feel that they can’t afford too big of a family.”

For Mr. Hu and his wife, one child had already been enough. But his parents exhorted them to have a second to help support the couple in their old age. They reluctantly agreed, knowing that rural pensions paid only a pittance.

Mr. Hu’s mother had initially helped watch his two children, ages 4 and 9, while he traveled to factories in southern China for better work, but that was no longer possible after her health faltered. Mr. Hu and his wife recently moved back to their hometown in a small county in Sichuan and opened a street food shop to get by.

He was now straining to pay for his mother’s medical expenses — her insurance had covered little of it — and to give his children good educations.

For the more affluent, the pressures may weigh differently, but no less heavily.

On the same day that the government announced it would relax birth limits, Li Li, a middle-level manager at a technology company in Beijing, was approached by her boss. He anxiously asked Ms. Li, 35, who is pregnant with her second child, how long exactly she would be away on maternity leave.

She quickly reassured him that she would be gone only three or four months and that she could work during the tail end of her leave, if necessary.

Pregnancy discrimination is widespread in China, with women reporting being fired or demoted after telling their bosses they were expecting a child. Some women have even reported being forced to sign contracts promising not to get pregnant within a certain period at new jobs.

“As a woman, you’re inherently at a disadvantage in the workplace,” Ms. Li said.

Ms. Li said she was sympathetic to her boss’s concerns. She did believe that as a manager, her absence would be inconvenient for the company. She acknowledged that she herself, when interviewing candidates, would sometimes wonder whether a new hire would soon leave to give birth.

It was nonetheless unfair to women, Ms. Li said. She said the government should reimburse employers for maternity pay, as some other countries do, and mandate paternity leave, so women would not be singled out for being parents.

In an acknowledgment of the problem, the government said on Monday that it would “protect the legitimate rights and interests of women in employment.”

Some women pointed out that the government had already barred employers from asking women about their marital or childbearing status in 2019, and the problem was weak enforcement. The government has often encouraged women to retreat to more traditional gender roles, in an effort to increase the birthrate.

“Our government is very good at empty talk,” said Lu Pin, a Chinese feminist activist. “It’s meaningless to just look at a few things they said.”

Ms. Lu expected workplace discrimination against women to get worse. Employers might fear that women would want to have a third child — even if, she added, that was unlikely to be the case, given broader trends.

The lack of social support may discourage those who would otherwise want more children, but a more fundamental issue may be a lack of interest among younger, better educated women who have declared a preference for small families. Even if the government did offer more benefits, Ms. Li said, she would not want to have a third child.

“Two is pretty good,” she said. “There’s no point to having too many.”