Day 1 of the End of the U.S. War in Afghanistan

KANDAHAR AIRFIELD, Afghanistan — On the morning of May 1, an Afghan transport aircraft landed at this sprawling military base in the country’s south. It was loaded with mortar shells, small-arms cartridges and 250-pound bombs to supply Afghan troops under frequent attack by the Taliban in the countryside.

Later, at midnight, a gray American C-130 transport aircraft taxied down the same runway, marking the end of the first official day of the U.S. military’s withdrawal from Afghanistan. The cargo plane was filled with munitions, a giant flat screen television from a C.I.A. base (known as Camp Gecko), pallets of equipment, and — in the real signal of the impending end of a long occupation — departing American troops. It was one of several aircraft that night removing what remained of the American war here.

Afghans continue fighting and dying with fleeting hopes of peace even while the Americans leave, adhering to a timeline laid out by President Biden to fully withdraw by Sept 11. The decision was opposed by his generals but begrudgingly stenciled on whiteboards in U.S. bases across Afghanistan, such as Kandahar Airfield, a former Soviet base that has been one of the Americans’ largest.

Once the airfield is stripped of everything deemed sensitive by its American and NATO landlords, its skeleton will be handed over to the Afghan security forces. 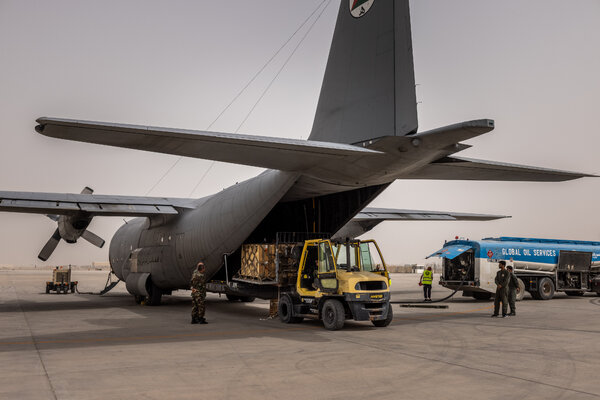 The scenes over the weekend were almost as if a trillion-dollar war machine had morphed into a garage sale. At the airfield’s peak in 2010 and 2011, its famous and much derided boardwalk housed snack shops, chain restaurants, a hockey rink and trinket stores. Tens of thousands of U.S. and NATO troops were based here, and many more passed through as it became the main installation for the U.S.-led war in Afghanistan’s south. It stood beside rural villages from which the Taliban emerged; throughout it all, the province has remained an insurgent stronghold.

Now, half-demolished outdoor gyms and empty hangars were filled with nearly 20 years’ worth of matériel. The passenger terminal, where troops once transited between different parts of the war, was pitch black and filled with empty, dust-covered chairs. A fire alarm detector — its batteries weak — chirped incessantly. The mess halls were shuttered.

The boardwalk was nothing more than a few remaining boards.

The American withdrawal, almost quiet, and with a veneer of orderliness, belies the desperate circumstances just beyond the base’s wall. On one end of Kandahar Airfield that day, Maj. Mohammed Bashir Zahid, an officer in charge of a small Afghan air command center, sat in his office, a phone to each ear and a third in his hands as he typed messages on WhatsApp, trying to get air support for Afghan security forces on the ground and in nearby outposts threatened by Taliban fighters.

“Yesterday, you wouldn’t have been able to sit down because things were so chaotic,” he said. “I fell asleep with my boots on and my gun in my holster.”

Sitting in his U.S.-built air-conditioned office, Major Zahid said he expected that one day soon his requests for help from the Americans would be met with silence. On Saturday, he didn’t even ask. He concentrated instead on what Afghan helicopters and bombers he could reach.

His anger at the U.S. departure was not about the lack of air support but rather, pointing to pictures on his phone, about the sport utility vehicles that he said the Americans had destroyed at the airfield because they couldn’t leave with them.

“Now, this is what really upsets me,” Major Zahid said, looking exhausted and encapsulating the sense of desperation of most Afghan soldiers. The Americans most likely destroyed the vehicles to prevent them from being sold off, given the rampant corruption in much of the ranks.

Major Zahid thought that the Americans were destroying more of those vehicles when an explosion echoed across the runway at around 2 p.m.

The blast was a rocket, fired from somewhere outside the base and landing somewhere inside, killing no one. The announcement from the base loudspeaker was distant and practically indecipherable in the can-shaped building that housed Major Zahid’s operations center. Nobody moved, phones rang, work continued.

Even though the rockets landed on the Afghan side, the Americans viewed it as a Taliban attack on them. The Trump administration had agreed to fully withdraw all forces from Afghanistan by May 1 in a deal with the Taliban signed in February 2020. In recent weeks, the Taliban said that any American presence in the country on or beyond that date would be considered a breach of the deal.

The U.S. military had been expecting some kind of assault as it left — despite the diplomatic overtures from American negotiators in Doha, Qatar, who had tried to convey to the Taliban that the military was in fact leaving, and that attacking American troops was a fool’s errand.

The American response was not subtle.

A flight of F/A-18 fighter jets, stationed aboard the U.S.S. Eisenhower, a nuclear-powered aircraft carrier, were in the air, making their way toward Afghanistan from the Arabian Sea — a roughly two-hour flight up what is called “the boulevard,” a corridor of airspace in western Pakistan that serves as an air transit route.

Having received approval to strike, the jets swooped in, dropping a GPS-guided munition — a bomb that costs well over $10,000 — on the additional rockets that were somewhere in Kandahar, mounted on rudimentary rails and aimed at the airfield.

Inside the American headquarters building at the airfield, two Green Berets — part of the shrinking contingent who work there now — pulled up the video of the afternoon airstrike on one of their phones.

“Make sure that goes in the nightly brief,” one of them said. The Special Forces soldiers, bearded and clad in T-shirts, ball caps and tattoos, looked out of place among what was left of the cubicles and office furniture around them, much of which was being torn apart.

Televisions had been removed from walls, office printers sat on the curb, the insignia once plastered on the stone wall that heralded who was in charge of the headquarters, long gone. Even though there would soon be fewer and fewer service members around each day, one soldier noted that the flow of care packages from random Americans had not slowed down. He now possessed what seemed like an infinite supply of Pop-Tarts.

A group of American soldiers, tasked with loading an incoming cargo flight didn’t know when they were going home. Tomorrow? Sept. 11? Their job was to close Kandahar before moving on to the next U.S. base, but there were only so many installations left to dismantle. A trio of them played Nintendo while they waited. One talked about the dirt bike he was going to buy when he got home. Another traded cryptocurrency on his iPhone.

When asked about Maiwand, a district only about 50 miles away where Afghan forces were trying to fend off a Taliban offensive and Major Zahid was desperately trying to send air support, a U.S. soldier responded, “Who’s Maiwand?”

In the evening, the base loudspeaker chimed as one of the transport planes departed. “Attention,” someone out of view said. “There will be outgoing for the next 15 minutes.” The dull thud of mortar fire began. At what was unclear.

The end of the war looked nothing like the beginning of it. What started as an operation to topple the Taliban and kill the terrorists responsible for the attacks on Sept. 11, 2001, had swelled over 20 years into a multitrillion-dollar military-industrial undertaking, infused with so much money that for years it seemed impossible to ever conclude or dismantle.

The Taliban’s often-repeated adage loomed over the day: “You have the watches, we have the time.”

In one of the many trash bags littering the base, there was a discarded wall clock, its second hand still ticking.