SINGAPORE – Asean’s unity and neutrality is what allows the grouping to be the convener of regional processes, and it needs to maintain that role amid stormy United States-China relations, Singapore’s ambassador-at-large Tommy Koh said on Tuesday (May 25).

Professor Koh said Asean will lose its edge the moment it is disunited or starts to take sides.

He added: “My appeal to my Asean brothers and sisters is to understand that we have this unique role to play in the regional processes because we are united and we are neutral. And the moment we become partisan or disunited, we lose that role.”

Relations between the US and China have deteriorated in the past few years as the two countries clashed on a number of issues such as trade, human rights, technology, security and defence.

The tensions have spilled over to the public. Ms Yong said that there is a sharp rise in anti-China sentiments in the US, especially among those in the Republican Party, conservatives and the more politically inclined citizens.

“When Americans think of China, the first things they think of are human rights abuses, the communists – which is kind of a bad word in America – and the communist authoritarian political system. So these are the negative sentiments at the top of their minds,” she said.

“So that means they see even Chinese people, not just the Chinese government as a threat to the US.”

In Beijing, the Chinese Communist Party has managed to ride on a groundswell of support for the party, following its success in lifting millions out of poverty, taking the country to space – most recently with the Mars mission – and its handling of the Covid-19 pandemic.

“The party is telling people to keep faith with it, and they (the people) can see all these changes taking place in their lives. When they see the US putting pressure on China, it does create some kind of resentment in people and we can see this spilling out in consumer boycotts,” said Mr Cheong.

“This is something I’m watching for, whether or not these sorts of nationalistic feelings will spill over into anti-American sentiments,” he added.

The ongoing tensions between the US and China have led to worries that smaller countries may be caught between the clash between the two giants, and some wondered if nations such as Singapore need to change their strategies in dealing with both.

Prof Koh noted that Singapore has close relationships with the US as well as China. “Our strategy is to be a friend of both the US and China and I see no reason why we should change our strategy,” he said.

He added that both the US and China have to learn to live with each other. The alternative – which is going to war – is “not an option”, as it will lead to the “mutual destruction” of both countries.

“There is no reason why these two countries can’t live peacefully with each other. There are so many areas in which they have convergent interests, not just climate change, but also fighting the pandemic and preparing to fight the next pandemic, non-proliferation of nuclear weapons, helping to reduce poverty in the world and fashioning a new economic model,” he said.

Prof Koh warned that a world bifurcated between the US and China is “very bad news” for every nation.

“Why? Because we want to trade both with the United States and with China. We procure technology from both China and the United States, and enter into many transactions with both countries. If the world were bifurcated economically and technologically, we would have to make a choice. We cannot be friends of both. And that is a dilemma that we don’t want to confront,” he said.

Prof Koh: No rational leader in Beijing or Washington will start a war with the other country. So my conclusion is, war is most improbable, but not unthinkable. A war can happen between the US and China as a result of a conflict between China and Japan over Diaoyu/Senkaku islands or because the PLA decides to take back Taiwan by military means.

Mr Cheong: I think the likelihood of it happening is increasing with more military movements across the Taiwan Straits. But it’s still, I think, quite unlikely at the moment.

Ms Yong: It’s up to the US whether it wants to come to Taiwan’s defence if China makes a military move against the island. Currently, there’s this policy of strategic ambiguity.

Ms Yong: Some degree of decoupling is already going on between the US and China. There’s also America trying to convince its allies and its partners to use its own non-Chinese technology. So I would watch to see if that continues to happen further.

Mr Cheong: The buzzword in Beijing is increasing technological self-reliance. China wants to build this ke ji qiang quo, or technological superpower. They’ve retooled and reconfigured their Made in China 2025 plan with a sort of greater emphasis on technological independence.

On effects of US-China tensions on Singapore society

Prof Koh: Singapore is a multi-ethnic country, and it’s natural for every ethnic group to have warm feelings for their ancestral lands. But after 56 years of nation building, I think all Singaporeans, no matter what their ethnicity is, believe in and they owe their allegiance to Singapore, and not to their ancestral lands.

But it is also incumbent upon Singapore leaders, including my colleagues and I at the Ministry of Foreign Affairs to indulge in what I call public diplomacy to explain our foreign policies to our citizens so that they understand and support us. 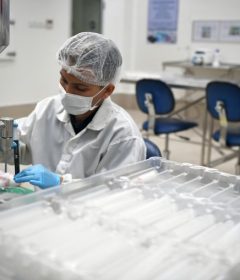