We’re looking at clues from the Saudi oil attack site and fires in Indonesia. We also have an interactive exploration of our love/hate relationship with work. 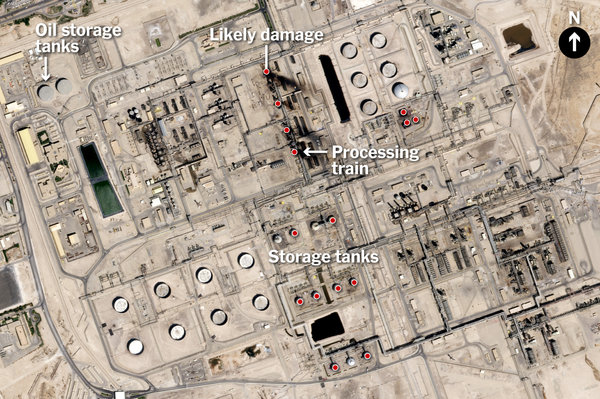 U.S. intelligence analysts and military investigators are poring over satellite imagery, communication intercepts and recovered missile and drone parts to get a clearer picture of the weekend attack on Saudi Arabia’s oil facilities.

Recovered missile circuit boards are of particularly high interest, as they could reveal whether the attack originated from Iran, which the Trump administration has singled out.

The Times did its own analysis of publicly available evidence to determine what might have transpired. One thing is certain: The attack exceeded anything that Houthi rebels in Yemen, who claimed them, have done before.

Go deeper: If Iran did play a role in the attack, it would not be a surprise. Iranian scholars say that Tehran has concluded that its recent aggressions have strengthened its leverage with the West and in the region, and judge that President Trump is reluctant to risk a military confrontation.

The social media giant expanded its definition of terrorist organizations as part of a series of changes intended to limit hate speech on its platform.

Facebook said the shooting in Christchurch, New Zealand, in which an Australian man who is accused of killing 51 people live streamed the attacks, “strongly” influenced its changes.

The platform is also planning to deploy artificial intelligence to better spot and block live videos of gunmen, and expanding a program that redirects users searching for extremism to resources intended to help them leave those groups behind.

Thousands of fires burn through Indonesia

Officials say that most of the fires in Borneo and Sumatra were set intentionally to clear the land for plantations for palm oil, a lucrative cash crop.

A particularly dry season has made the fires some of the worst the country has seen in years. Firefighters have been unable to contain them, and the resulting smoke has disrupted air travel, forced schools to close and sickened thousands of people.

The fires raise immediate comparisons to those in the Amazon rainforest, which captured the world’s attention last month, and compound climate change concerns.

Reminder: NASA researchers have said that the accelerated destruction of Borneo’s forests, spurred by a global demand for palm oil, contributed to the largest single-year increase in global carbon emissions in two millenniums.

If you have some time, this is worth it

Work, love it and hate it

Our writers take on a range of topics: the awkward, but essential, art of office chitchat, an analysis of how millennials and Gen Z-ers are going to fix the troubles of the workplace and … poop shame.

Israel: Polls have closed in the second parliamentary election in five months. Results will trickle in over the coming hours, revealing the fate of Prime Minister Benjamin Netanyahu, the country’s longest-serving leader, who faces a slew of corruption charges.

Afghanistan: Two suicide bomb attacks, one on President Ashraf Ghani’s campaign rally in Parwan Province and another in Kabul, killed dozens of people less than two weeks before elections. Both bombings were claimed by the Taliban, delivering on its warnings that President’s Trump’s cancellation of peace talks would lead to an escalation of violence.

WeWork: Facing a lukewarm reception and skepticism about its business model and governance, the company delayed its initial public offering by several months. One person with knowledge of the matter suggested that the stock sale might be scrapped entirely.

Pakistan: A college student who confessed to murdering a professor he accused of insulting Islam months ago has so far not been charged, chilling teachers throughout the education sector.

Guantánamo Bay: At $13 million per prisoner, the detention site in Cuba that was set up after the attacks on Sept. 11, 2001, appears to be the world’s most expensive prison.

iPhone 11 review: Apple’s lineup of new devices will be available on Friday, but we’re at a point where an upgrade isn’t necessary for most users, our tech columnist writes.

Global health: From 2000 to 2017, almost all countries that accounted for the vast majority of deaths of young children lowered their child mortality rates, according to a report by the Bill and Melinda Gates Foundation.

Snapshot: Above, the 5-foot-5 Fumiaki Tanaka of Japan, who will most likely be the shortest player in this year’s Rugby World Cup, but who’s hardly alone in stature. New Zealand is a heavy favorite to win a third straight title when the tournament opens on Friday in Japan. Here’s a look at the 20 teams.

What we’re reading: This HuffPost piece. Our Magazine writer Taffy Brodesser-Akner writes: “I loved this piece by Emily Peck on the revolutionary way that ‘Succession’ treats women, which is as people who keep their clothing on. I love Emily, and on Monday mornings, I listen to her and Felix Salmon on their special, ‘Succession’-focused episodes off the Slate Money podcast. It’s the balm I require after Sunday nights.”

Cook: Citrusy roast chicken with pears and figs is simple enough for weeknights and festive enough for guests.

Watch: The Amazon series “Undone” is the latest show to use otherworldly animation to explore the aftermath of trauma. We made it a Critic’s Pick.

Listen: Post Malone’s “Hollywood’s Bleeding,” the 24-year-old’s third album, will certainly be one of this year’s most popular, writes our critic.

Read: In Kevin Barry’s buoyant third novel, “Night Boat to Tangier,” longlisted for the Booker Prize, a pair of existentialist thugs in a Spanish port city recount their friendship, their fights and their many bad decisions.

Smarter Living: It’s time to rethink when to upgrade your phone. For those who want the latest features, it’s long been accepted practice to get a new model every two years. But as advances in smartphones grow more incremental, our tech columnist recommends a new rule: If your phone is less than five years old, there’s no rush to buy.

If you have an older phone, here’s some advice on how to extend its life.

Nearly 100 years ago, a fashion faux pas led to days of bedlam across New York City.

The Straw Hat Riot emerged from the idea that straw hats should not be worn very far into September. (Men usually wore hats outdoors in those days, and straw was popular for summer.)

Every year after the cutoff (which moved around a bit), men would lose their hats to rowdies, so newspapers printed reminders. On Sept. 13, 1922, with the date still two days away, some youth gangs went further. They knocked straw hats off men’s heads, stomping on them and even starting “straw hat bonfires.”

For days, the mobs “terrorized whole blocks,” The Times wrote. Some armed themselves with sticks with nails at the end to snatch hats. Others stood along train tracks and swiped hats off passing riders. There were injuries and arrests before the trouble died down.

Three years later, President Calvin Coolidge essentially put an end to the cutoff rule by going for a mid-September stroll in the “tabooed headgear.”

Thank you
To Mark Josephson and Eleanor Stanford for the break from the news. You can reach the team at [email protected]

P.S.
• We’re listening to “The Daily.” Our latest episode is about the attack on Saudi oil facilities.
• Here’s our Mini Crossword, and a clue: Cheapest section of a plane (five letters). You can find all our puzzles here.
• The Times won three awards at last weekend’s Online News Association’s conference, for an interactive examination of the legacy of the lynching of Emmett Till; a visual investigation of the conflict in Gaza; and “The Privacy Project” from our Opinion section.

COMMENTARY: Approval ratings soar for Trudeau and premiers, but can that last?