We’re covering Myanmar’s freedom of speech track record, a changing political climate in Australia and the best and worst of the Met Gala.

Vice Premier Liu He, China’s top trade negotiator, will join a delegation to Washington for talks on Thursday and Friday, Chinese officials said.

Mr. Liu’s visit was in doubt after President Trump’s economic aides accused China of retreating from previous commitments and said that Mr. Trump would increase tariffs on $200 billion of Chinese goods on Friday.

Mr. Liu’s participation may increase the odds of a deal. But U.S. stocks sank by almost 2 percent on the promise of new tariffs.

Explainer: Mr. Trump said that his trade policies had boosted the U.S. economy. Almost no evidence supports his claims.

Perspective: In an Op-Ed, an expert on Asian affairs writes that the Chinese president, Xi Jinping, stands to lose face if an agreement is reached. 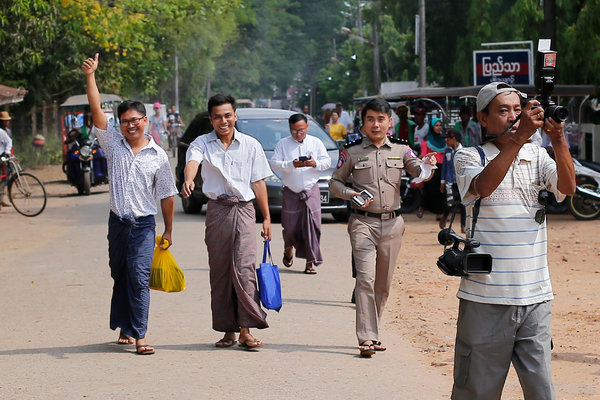 Myanmar released two prizewinning Reuters journalists who had been in prison for more than a year for covering the country’s brutal crackdown on the Rohingya minority group.

But the news barely moves the needle for freedom of expression in the country, analysts and activists said.

By the numbers: Twenty-five political prisoners are still behind bars and 283 others are facing trial, according to one advocacy group.

Context: Myanmar emerged from decades-long military rule in 2015 but has since been run by an awkward power-sharing agreement between the military and elected civilian leaders.

The civilian government leader, Aung San Suu Kyi, a Nobel Peace Prize laureate, has frequently sided with the military even as it carried out what the U.N. called genocide against the Rohingya.

The Trump administration stepped in to stop Donald McGahn, the former White House counsel, from sharing documents with congressional investigators and suggested that the president could assert executive privilege over the records.

The move is the latest White House effort to thwart lawmakers’ investigations. On Monday, the administration ruled out turning over President Trump’s tax returns.

Reminder: Mr. McGahn was a crucial witness in Robert Mueller’s Russia investigation, particularly in relation to episodes of possible obstruction of justice.

Mr. Mueller’s report details how, in June 2017, the president pressured Mr. McGahn to fire the special counsel and then pushed him to write a false document to recant what he had told investigators. Those were two of the clearest examples in the report of Mr. Trump trying to influence witness testimony.

What’s next? Democrats in the House could initiate contempt-of-Congress proceedings against Mr. McGahn. They are voting on another contempt proceeding, against Attorney General William Barr, on Wednesday.

Australia’s political climate may be changing

Australia has warmed faster than the global average, its Great Barrier Reef has been devastated and this year extreme weather events have dented the nation’s economy.

Against this backdrop and ahead of the national elections next week, our climate reporter Somini Sengupta drove around the country to see how climate change might sway voters.

By the numbers: More than 60 percent of voters have identified global warming as a “critical threat,” and almost the same percentage say they believe the government should address the issue.

At the Arctic Council: Under pressure from the United States, the council issued a short statement that excluded any mention of climate change.

It was the first time since 1996 that the international group, which was formed to protect the region’s environment, had been unable to detail its priorities. The omission was especially notable because scientists say the Arctic is heating up faster than the world average.

In the years after the country’s devastating civil war came to an end in 2009, Sri Lanka climbed the ranks of the global tourism industry. Becoming a must-see travel destination boosted much of the country’s economy, transforming small villages and generating jobs.

That was until the Easter Sunday bombings.

Turkey: The decision by the electoral authorities to erase a stinging defeat for President Recep Tayyip Erdogan has left the opposition angered but determined to win the race for mayor of Istanbul a second time.

Germany: The country’s health minister proposed fining parents who refuse to vaccinate their children against measles about $2,800 in an effort to combat the resurgence of the disease.

Met Gala: There were colors, feathers, a striptease and a few severed heads. But the theme — camp — got lost somewhere under all the showmanship, writes our fashion critic Vanessa Friedman. Here’s a peek inside the fashion industry’s biggest party.

Snapshot: Above, mysterious rock carvings were uncovered by two amateur archaeologists on the coastal plain south of Mumbai.

52 Places traveler: In his latest dispatch, our columnist decides to improvise in the face of rain on the Black Sea in Georgia and crowds on the Red Sea in Israel.

Horse racing: The Kentucky Derby winner, declared the victor after another horse was disqualified, will skip the Preakness Stakes, the second leg of thoroughbred racing’s Triple Crown. Country House came down with a respiratory infection, the horse’s trainer said.

Google: The Pixel 3A, a new version of the company’s popular Pixel smartphones, is fast and capable and has a clever camera. At $400, it’s also cheaper than many phones on the market.

“Game of Thrones”: After an out-of-place coffee cup was spotted in the show’s recent episode and turned into social media fodder, HBO quietly edited it out of the scene.

What we’re reading: This in The Cut. Melina Delkic, a member of the Briefings team, says, “Among the things that struck me about this deeply creepy and well reported yarn about a group of Sarah Lawrence students is how hard it is to take legal action against a cult, and how easily one can manifest near you.”

Cook: This carrot tart with ricotta and feta, with store-bought puff pastry, is worth your time.

Go: The playwright Tori Sampson defines all four characters in “Cadillac Crew” with the same phrase: “a powerhouse of a young woman.” It’s playing at the Yale Repertory Theater, in New Haven.

Watch: What’s new about the Sundance series “State of the Union” is its 10-minute episodes. What’s interesting about it is its formidable concentration of talent.

Read: If you like your memoirs to revolve around singular experiences, Lara Prior-Palmer’s “Rough Magic” delivers.

Smarter Living: Feeling connected isn’t just about strong friendships. Casual, low-stakes relationships (with neighbors, a local barista or fellow members in a spin class) can also offer strong rewards. Studies show that the more “weak ties” people have, the happier they are and the more empowered they feel. So, instead of considering minor brushes of socialization throwaway interactions, cultivate a network of acquaintances.

And are you thinking about buying a 5G phone? Our advice is to wait.

On Thursday, its focus will be a lifetime achievement award for Robbie Robertson, one of many Canadians who’ve become international music stars. He played with the Band, which was known for its work with Bob Dylan.

That Canada has a vibrant music industry to celebrate owes a debt to a bureaucratic move in 1970.

The rise of streaming music, which is not regulated in Canada, has diminished the effectiveness of radio as a promotional tool. But the country still churns out global stars.

This month, the rapper Drake, who is also one of the biggest boosters of his hometown, Toronto, set a record for receiving the greatest number of Billboard Music Awards, a total of 27.

That’s it for this briefing. Happy Hump Day.

P.S.
• We’re listening to “The Daily.” Today’s episode is the second of a two-part series about China’s surveillance state.
• Here’s our Mini Crossword, and a clue: Restaurant booking, slangily (3 letters). You can find all our puzzles here.
• The New York Times seeks out the best journalists, data designers, videographers, art directors and many others. Check out our career opportunities.