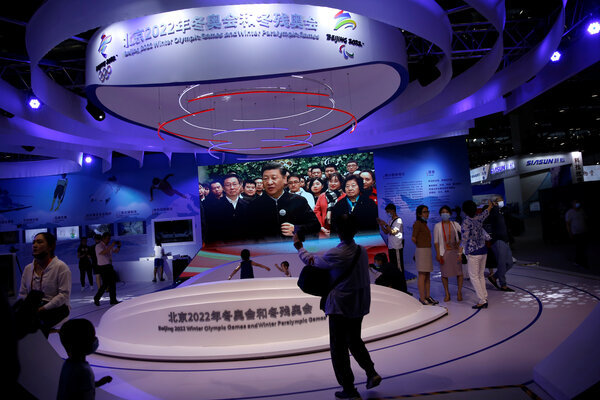 China looks ahead to a more hostile world

China’s leader, Xi Jinping, has used recent trips to a corn farm, a steel plant and a tech innovation center to highlight a new economic strategy: The country will have to retool its economy to depend less on foreign economies in a post-pandemic world.

Mr. Xi has said that Chinese people need to spend more and manufacturers have to be more innovative. The most pressing issue at hand, according to official media comments on Mr. Xi’s strategy, is that China must be ready for sustained acrimony with the United States that could put at risk its access to the American market.

“This policy has a lot to do with China’s changing international environment, particularly the deterioration of Sino-American relations,” said Yao Yang, the dean of the National School of Development at Peking University. “China needs to prepare for the worst-case scenario, in which the U.S. seals off China in certain tech areas.”

Doubts: Chinese leaders have promised since at least 2006 to make domestic consumer spending a bigger share of economic activity — with mixed success. And China depends on imports of technology, crops and energy.

The country surpassed Brazil in the number of coronavirus cases on Monday and now ranks behind the United States, which has the world’s biggest outbreak.

India reported 90,802 new cases on Monday, breaking its own record from the day before and taking its total to more than 4.2 million, according to a New York Times database. Brazil is now third with more than 4.1 million cases. The U.S. caseload stands at more than 6.2 million.

India’s surge in cases comes as the government continues to ease lockdown measures in an effort to help the economy. On Monday, the subway system in New Delhi began a phased reopening after being shut for more than five months.

You can read more about how the pandemic has shattered India’s economy in our Back Story.

Long-haul patients have begun to open up about how their mental health has suffered because of the virus. They are grappling with depression, anxiety and fatigue.

British health officials announced a sharp rise in new cases, mostly among young people. The 2,998 new cases were the highest number since late May, during the outbreak’s peak.

Local news media outlets reported that Maria Kolesnikova was grabbed off the street by masked kidnappers in the center of Minsk on Monday, bundled into a dark minivan and driven away at high speed. She was the last prominent protest leader in Belarus still at large.

Linas Linkevicius, the foreign minister of neighboring Lithuania, said Ms. Kolesnikova had been the victim of a “kidnapping,” deploring in a Twitter post that “Stalinist N.K.V.D. methods are being applied in 21st century Europe” — referring to the predecessor to the K.G.B.

The harvest this month of the long-lost Judean dates at a kibbutz in Israel was hailed as a modern miracle of science. The honey-blond fruit was plucked from a tree that sprouted from a 2,000-year-old seed retrieved from an archaeological site in the Judean wilderness.

Our reporter recounted the work and determination of two women — a researcher on natural medicine and an expert on arid agriculture — to bring back the ancient dates.

Jacob Blake: In a video recorded from his hospital bed, Mr. Blake, a Black man who was shot in the back by a white police officer in Kenosha, Wis., spoke publicly for the first time about what happened to him. “Every 24 hours, it’s pain — it’s nothing but pain,” he said.

Philippines: President Rodrigo Duterte pardoned a U.S. Marine who killed a transgender woman. The decision angered both nationalist groups that oppose the country’s military agreements with the U.S. and advocates for gay and transgender rights who said Mr. Duterte had shown leniency toward a hate crime.

Aleksei Navalny: The Russian opposition leader is no longer in a medically induced coma after a suspected poisoning, according to the German doctors treating him in Berlin. They added that it was too early to determine whether he will suffer long-term effects.

Jamal Khashoggi: A Saudi court has issued final verdicts in the killing of the dissident writer. Five of the eight defendants were sentenced to 20 years in prison each, two were given 17-year sentences and one was issued a 10-year sentence. The Saudis have never released the defendants’ names.

Snapshot: Above, coronavirus skeptics and far-right supporters during a protest in Berlin last weekend. President Trump is emerging as a kind of cult figure in Germany’s far-right scene and an inspiration to fringe groups like QAnon, whose following in Germany may now be the biggest, along with Britain, outside the U.S. Mr. Trump’s message of disruption is spilling far beyond American shores, extremism experts say.

What we’re reading: This Axios roundup of pandemic changes we might want to keep. It’s a good reminder of the little slivers of silver linings this year.

Cook: Jacques Pépin’s take on pissaladiere turns the Niçoise version of pizza into a sandwich on a baguette.

Watch: “Mulan,” now streaming on Disney+, features a cameo appearance by Ming-Na Wen, the actress who originally voiced Mulan in the 1998 animated version.

Do: The ground beneath your feet may feel as if it’s constantly shifting, and planning can seem futile. Here are a few tips on how to cope, when everything keeps changing.

There’s so much to read, cook, watch and do while staying safe in your place. At Home has our full collection of ideas.

Jeffrey Gettleman, our South Asia bureau chief, has been reporting on the economic downturn in India stemming from the country’s lockdown and virus outbreak. I talked to him about what went wrong and the path forward.

India’s economy was thought to be on track to rival China’s, but their paths have diverged widely this year in the pandemic. What happened?

In March, the prime minister imposed a very strict lockdown on the entire economy — no offices, no schools, no businesses, no transportation, no movement — and he gave people only four hours’ notice. People felt totally ambushed and didn’t have provisions in place. Millions of people lost their jobs.

There are also migrant workers — in India, over the last several decades there was an exodus from rural areas into urban areas for jobs. The government did not plan emergency provisions in a comprehensive way that reassured these people that they would be OK.

During the two-month lockdown, tens of millions of migrant workers walked back or took trucks, basically poured out of the urban areas of India. That did two things: That made the economic distress even worse. When the lockdown was lifted, there was a lot of labor missing. It also spread the coronavirus, because the virus was the most intense in crowded urban areas, and these people then were carriers and they brought the virus from the cities into every corner of the country.

India’s economy has taken a bigger hit than any other economy in the world because its labor was more disrupted. The Chinese never did a national lockdown. They locked down parts of Wuhan Province and other places at different points. But they never imposed a paralyzing of the national economy. So when the lockdown was lifted, the economy did not just bounce back.

How permanent is this?

We don’t know. The Indian economy is definitely doing better. There’s traffic in the streets, shopping being done at the malls. Many offices are open or partially open. There’s much more economic activity than there was during the lockdown. But there are still many people who are separated from their jobs and don’t want to come back. There are others who have gone hundreds of miles away and are having trouble to come back.

P.S.
• The Daily is off for the U.S. Labor Day holiday. Listen to our latest Book Review podcast, featuring Jeffrey Toobin on writing about President Trump.
• Here’s our Mini Crossword, and a clue: Relaxing resorts (four letters). You can find all our puzzles here.
• Jonathan Abrams, most recently at Bleacher Report’s magazine, is rejoining the Sports desk as a general assignment reporter.

Opinion | The Picture of a Broken Tax System