We’re covering the latest from the U.S. election, an indefinite delay for Poland’s ban on abortion and more coronavirus restrictions for Europe. 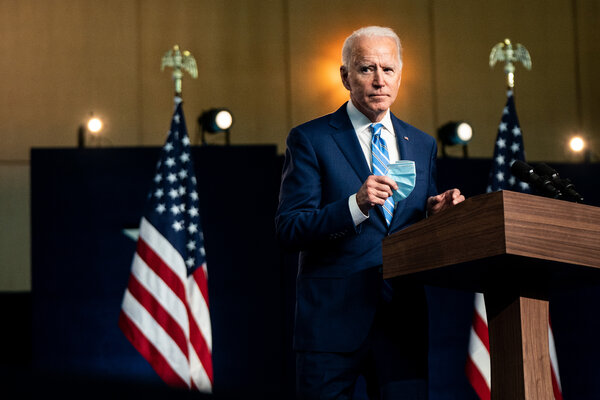 ‘We believe we will be the winners’

More than a day after polls closed in the United States, no victor has been declared in the presidential election, though an outcome is growing tantalizingly close, as a transfixed world awaits what’s next.

The presidential election appears to rest on the results in several crucial battleground states that are favoring Joe Biden. Mr. Biden picked up Wisconsin and Michigan and is holding a slim lead in Arizona and Nevada, all states President Trump carried in 2016. Georgia, Pennsylvania and North Carolina all remained too close to call. Here’s where the race stands.

Biden: Speaking from Wilmington, Del., Mr. Biden urged patience. “I’m not here to declare that we’ve won, but I am here to report that when the count is finished, we believe we will be the winners,” he said, adding that it was “clear” that he would reach 270 electoral votes.

Trump: If Mr. Trump loses his bid for re-election, as looks increasingly likely, it would be the first defeat of an incumbent president in 28 years. But one thing seems certain: Win or lose, he will not go quietly away.

Legal challenges: After prematurely declaring victory early in the day, Mr. Trump said he would petition the Supreme Court to demand a halt to the vote counting. The Trump campaign said it would mount legal challenges in Michigan and in Pennsylvania and seek a recount in Wisconsin. It is not at all clear that any additional election disputes will reach the justices.

Paris Agreement: On Wednesday, the United States officially withdrew from the global pact aimed at averting catastrophic climate change. If Mr. Biden wins and rejoins the accord, as he has promised, the U.S. would find that it has a lot of catching up to do.

Across Europe, officials have been strengthening actions to prevent hospitals and health systems from becoming completely overwhelmed by the surge in coronavirus cases.

England will today begin a new lockdown, in which people will be asked to stay at home, with exceptions for school, certain jobs, food shopping or exercising. Prime Minister Boris Johnson of Britain told Parliament on Wednesday that there was no alternative to a monthlong lockdown if the country wanted to avoid a “medical and moral disaster.” Britain has reported more than 60,000 coronavirus deaths.

And in Italy, the government announced Wednesday night that it would lock down a significant portion of the country, including the northern regions that are its economic engine. The lockdown, which includes Milan, begins Friday. “The situation is particularly critical,” Prime Minister Giuseppe Conte said.

Table for two?: With Italy’s restaurants forced to close hours earlier than most Italians eat dinner, San Marino, an independent microstate within northern Italy, has emerged as a culinary destination for late-night diners.

Dissent in France: In a tense exchange in France’s National Assembly, the health minister lashed out at critics of an extension of the state of the emergency, and he described hospitals filling and young people in critical care. “That’s the reality,” he said. “If you don’t want to hear it, get out of here.”

A delay to Poland’s ban on abortion

Poland’s right-wing government has indefinitely delayed putting in effect a court ruling that would impose a near-total ban on abortions, after two weeks of the largest protests in the country since the 1989 collapse of communism. Hundreds of thousands turned out, holding banners that read, “I wish I could abort my government” and “This is war.”

The demonstrations across the predominantly Roman Catholic country also reflected a broader anger at the governing party over the erosion of democracy and other grievances, including its handling of the pandemic.

Critics accuse the government of circumventing Parliament to introduce the effective ban on abortion. They say the court is under the thumb of the governing party, which appointed 14 of its 15 judges. The government could still impose the ruling at any time, though legal experts said that to do so would violate the Constitution.

If you have 4 minutes, this is worth it

The discovery of a prehistoric female skeleton buried with what archaeologists call a “big-game hunting kit” in the Andes highlands of Peru has challenged one of the most widely held tenets about ancient hunter gatherers: that males hunted and females gathered.

Though female remains have previously been associated with materials that suggested that they were hunters, these examples were treated as outliers. But what if they weren’t, and the overall view of hunting — and ancient gender roles — should be adjusted?

Coronavirus: The Danish government will slaughter millions of mink at more than 1,000 farms, citing concerns that a mutation in the novel coronavirus that has infected the mink could possibly interfere with the effectiveness of a vaccine for humans.

Politics in Ethiopia: Prime Minister Abiy Ahmed began a sweeping military operation against one of his own regions, Tigray, where the Nobel Peace Prize winner has accused the provincial government of attacking an army base. The move sent waves of alarm across the region, stoking fears of a civil war.

Snapshot: Above, Olha Habro, 76, cooking borscht in the Borshchiv, Ukraine — one of a dozen villages and cities in the country named for the beet soup. Borscht is the subject of a dispute between Ukrainians and Russians, who both claim it as their own.

What we’re reading: This Eater story on what France’s lockdown — and newfound enthusiasm for takeout food — means for its culinary legacy.

Cook: Rustic with deep flavor, this smoky lentil stew with leeks and potatoes improves after a day in the fridge.

Listen: You may not be able to travel the world right now, but thousands of foreign radio stations are easily accessible online to bring the world to you. Here’s how to listen.

Do: We look at three methods of controlled breathing that can help reduce stress, increase alertness and boost the immune system.

Take some time to explore our At Home collection for more ideas on what to read, cook, watch, and do while staying safe at home.

Moments from the U.S. campaign trail

After covering the epic race for the American presidency, 16 Times journalists shared some of their memorable experiences for Times Insider. Here is an excerpt.

The night before Super Tuesday in early March, I took my then-7-year-old daughter with me to East Los Angeles for an Elizabeth Warren campaign rally I was covering. For months, my daughter had listened to me describe scenes and politics she didn’t really understand. By then, it was clear that Senator Warren, the last woman standing, would not succeed in getting the Democratic nomination.

My daughter was mostly in awe of my friends working for the television networks, as they stood in the stands with their cameras and laptops. That press corps was mostly young women, who were exceedingly generous to a second grader. The night was a moment for her to witness history, and women’s roles in it. — Jennifer Medina

In February, I was in a New Hampshire ballroom with Andrew Yang, the long-shot candidate I had been covering for months, when he announced that he was dropping out of the Democratic primary. You could feel the room deflate as soon as he said the words.

Soon after he exited the stage, I met Gene Bishop, an 81-year-old New Hampshire voter who told me he had never contributed to or canvassed for a political candidate before he began supporting Mr. Yang. “I just can’t believe that it’s over,” Mr. Bishop said, his brave face melting away. Then, to my surprise, he began to cry. It’s easy to get jaded about politicians. But my brief interview with Mr. Bishop has stuck with me. — Matt Stevens

That’s it for today’s briefing. Thanks for joining me.

P.S.
• We’re listening to “The Daily.” Our latest episode is about the unfinished U.S. election.
• Here’s our Mini Crossword, and a clue: Espresso or cappuccino, to Italians (five letters). You can find all our puzzles here.
• The word “quarterboomers” appeared in The Times for the first time on Wednesday, according to the Twitter bot @NYT_first_said.
• Our science reporter Apoorva Mandavilli recently joined “The Daily Dive” to discuss coronavirus antibodies.

Opinion | The Long Road Out of Afghanistan

Opinion | The MAGA Revolution Devours Its Own