We’re covering the killing of protesters in Nigeria by security forces, Pope Francis’ support for same-sex civil unions and Azerbaijan’s enthusiasm for war. 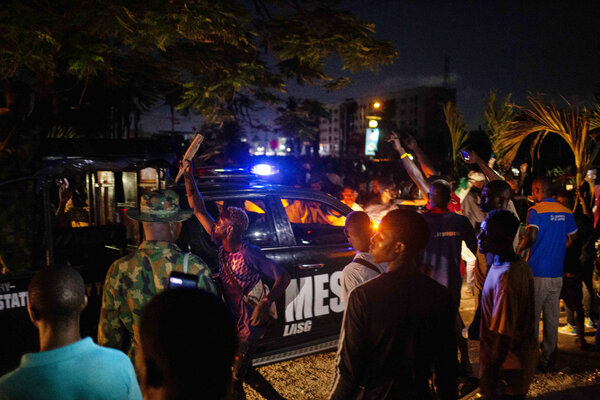 At least 12 protesters killed in Nigeria

Tens of thousands of people have been protesting for weeks against a notoriously brutal and corrupt Nigerian police agency: the Special Anti-Robbery Squad, known as SARS. On Tuesday, the security forces killed at least 12 people at demonstrations in the Lagos area.

Survivors recalled sitting peacefully, then suddenly fleeing in panic. Some said military and police units had surrounded demonstrators in the affluent suburb of Lekki, preventing them from leaving.

“These shootings clearly amount to extrajudicial executions,” said Osai Ojigho, Amnesty International’s director for Nigeria. “There must be an immediate investigation and suspected perpetrators must be held accountable through fair trials.”

Analysis: Protests that started with anger over police brutality have now broadened, fueled by longstanding grievances over corruption and lack of accountability. Here’s what you need to know.

Opinion: “The Nigerian state has turned on its people,” the author Chimamanda Ngozi Adichie writes. “It is a colossal and unforgivable crime.”

Argentina, Brazil, Britain, France, India, Russia and the United States have each, in the last week, reported at least 100,000 new cases of the coronavirus, pushing the global tally to more than 40.7 million. In many cases, these countries’ numbers are much higher than they were during the height of the pandemic in the spring.

In France, which has added 174,273 cases in the past week, a curfew has been implemented in Paris and eight other regions. More than 11,000 virus patients are hospitalized, and 2,000 are in intensive care.

The number of daily recorded infections in Britain has nearly tripled since the beginning of October. In the past seven days, Britain has reported 127,622 new cases, stretching intensive care units to their limits in some parts of the country.

The Czech Republic, which has the highest coronavirus transmission rates in Europe, announced plans to close most shops and further tighten restrictions on movement.

Over the past week in the United States, there have been 421,114 new cases, illustrating that the long-predicted autumn wave of the virus is well underway.

Three rigorous studies published this week have cast doubt on the use of the drug tocilizumab as a treatment for Covid-19, as well as on the hypothesis underlying its use.

A rash of provocative headlines this week flooded social media platforms with a tantalizing — but flawed — idea: that mouthwash could “inactivate” the coronavirus and help curb its spread.

In his strongest statement yet on the issue — and an apparent break with church policy — Pope Francis expressed support for same-sex civil unions. “What we have to create is a civil union law. That way they are legally covered,” Francis said in a documentary that premiered on Wednesday, reiterating his view that gay people are children of God. “I stood up for that.”

The remarks from the leader of the Roman Catholic Church could shift debates about the legal status of same-sex couples in nations around the globe and unsettle bishops worried that the unions threaten what the church considers traditional marriage — between one man and one woman. His comments drew mixed reactions.

Francis backed same-sex civil unions before becoming pope, when he was archbishop of Buenos Aires. Gay Catholics and their allies say that his opposition to gay marriage within the church remains absolute.

As Azerbaijani soldiers gain ground in the conflict with Armenia, tens of thousands of refugees hope to return to their former homes. The two sides are engaged in the heaviest fighting since the early 1990s over Nagorno-Karabakh, an ethnic Armenian enclave inside Azerbaijan. Above, the funeral for Eldar Aliyev, 27, who died fighting for the Azerbaijani forces.

Around Baku, Azerbaijan’s capital, signs of war fever are everywhere and support for the fight is strong, our correspondent found. Bright flags hang from every public building, while giant screens along the main streets play video footage of precision drone strikes on Armenian soldiers.

Samuel Paty: An investigation into the murder of a French teacher who was decapitated outside the suburban school where he worked found that two teenagers were paid about $350 to identify him. Mr. Paty’s murder has set off a wave of national mourning, tributes to the teacher and a broad government crackdown against Muslim individuals and groups.

Rudy Giuliani: President Trump’s personal lawyer has been caught up in Sacha Baron Cohen’s new “Borat” satire. In an edited scene, Mr. Giuliani is shown following an actress impersonating a reporter into a bedroom, and at one point reclining on the bed and putting his hands in his pants. He later said it was an attempt to adjust his clothing.

U.S. election interference: Iran and Russia have both obtained American voter registration data, and Tehran used it to send threatening, faked emails to voters that were aimed at influencing the presidential election, top national security officials announced on Wednesday.

Family separation: The parents of 545 migrant children who were separated from them at the U.S. border have not yet been found, despite a wide-ranging campaign across Central America, according to court documents filed this week in a case challenging the Trump administration’s policy.

Snapshot: Above, workers at Cuarentena Baking, or Quarantine Baking, in Mexico City in September. The bakery was started by two artists with nothing but a $42 toaster oven and an Instagram account. Their booming success is a testament to the power of cooking as a survival strategy in Mexico’s food-obsessed capital.

Lives Lived: The costume designer Robert DeMora, whose fantastical, mischievous creations embellished Bette Midler on stage and screen, and who worked on “Risky Business,” “Marathon Man” and other films, died at 85 last month.

What we’re reading: This Foreign Policy article about how one Finnish reporter covers the Trump administration. It’s a good look at how foreign correspondents explain a unique moment in the U.S. to their readers back home.

Watch: David Letterman’s Netflix show “My Next Guest Needs No Introduction” is back, with more interviews and a perspective altered by the pandemic.

Do: Running pummels knees more than walking does, but a new study shows that it may fortify and bulk up cartilage, helping stave off knee arthritis.

For more ideas on what to read, cook, watch and do while staying safe at home, browse our At Home collection.

In over 150 years of publishing, The Times has offered many different tips for raising children. Our Parenting editor found a mixed bag of hilariously bad takes and surprisingly sensible advice when she went searching through our archives.

In 1902, The Times ran a positive review of a book called “How Can I Cure My Indigestion?” by Dr. A.K. Bond, who was very anti-banana:

The best of mothers may be foolish and affection cannot take the place of common sense. “A first-class mother sound in health, of well-developed physique, fond of babies, and restful to her nerves, is the best safeguard against indigestion in an infant.” You may not feed a baby on bananas, and Dr. Bond writes that he has come across such inhumanity (and stupidity).

One of the goofiest examples was offered in 1919, by Dr. Lambert Ott, who saw wine as a remedy for children:

“I have used red wine as a tonic for weak children with amazing results. However, I instructed the parents not to let the children know that I was giving them wine, but call it red tonic,” Dr. Ott said.

In 1952, a voice of reason appeared in an article about Clark E. Vincent, a graduate student at the University of California who railed against trends in medicine and pointed out that the bottle vs. breast “controversy” had existed since Hippocrates:

Writers in the field of infant care and child-rearing, he holds, instead of constructing a body of scientific data that will stand through scrutiny, have often reflected changing patterns of thought in middle-class society and changing theories of education and personal formation.

His ultimate takeaway? Less dogmatism and more flexibility, “so long as the baby’s needs are satisfied.”

Thanks for joining me. See you next time.

P.S.
• We’re listening to “The Daily.” Our latest episode is about misinformation on social media.
• Here’s our Mini Crossword, and a clue: “Brownstone hangout spot” (five letters). You can find all our puzzles here.
• The word “punkify” first appeared in The Times on Wednesday, according to the Twitter bot @NYT_first_said.
• The Times won five Online Journalism Awards and had six finalists for digital work from throughout the Newsroom and Opinion.

A reshuffled deck awaiting the Biden administration in Asia

Opinion | The Rotting of the Republican Mind