The Vatican, Donald Trump, Europe’s second wave: Here’s what you need to know.

We’re covering a surge in coronavirus cases in Europe, a suggestion of trouble over the peaceful transfer of power in the U.S. and a sudden resignation for an important cardinal. 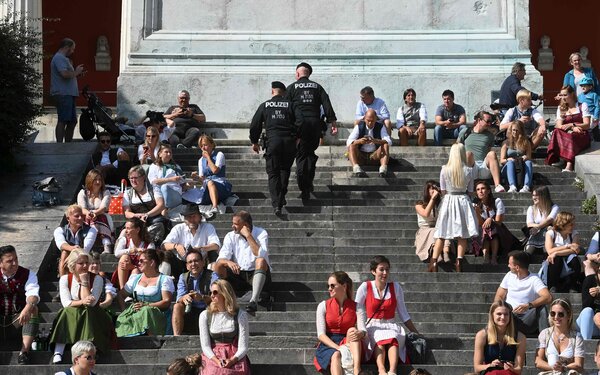 As the number of coronavirus cases mounts, European officials fear a repeat of harrowing scenes from the spring, when the virus swamped intensive care units in Italy and Spain.

New restrictions have been imposed across the continent: In Munich, which would ordinarily brim with boisterous crowds for Oktoberfest this month, the authorities banned gatherings of more than five people. In Marseille, France, all bars and restaurants will be closed next Monday. And in London, where the government spent weeks encouraging workers to return to the city’s deserted skyscrapers, it is now urging them to work from home.

But just how imminent is the peril? European leaders are dealing with a fast-changing situation, with conflicting evidence on how quickly new virus cases are translating into hospital admissions. Madrid’s hospitals are close to capacity, for example, but the number of hospital admissions and deaths in France are going up more slowly.

Hypotheses: Some experts argue that this shows that the virus has lost potency since it first arrived in Europe, or that it is now infecting mostly younger people, who are less likely to experience severe symptoms. Others say it is a testament to social distancing, the widespread use of face masks, greater precautions for more vulnerable people and better medical treatment.

In other virus developments:

The vaccine maker Novavax said Thursday that it would begin the final stages of testing its coronavirus vaccine in the United Kingdom and that another large trial was scheduled to begin next month in the United States.

Israel is imposing a second national lockdown after infection rates soared this week to about 5,000 new cases a day. The new measures, which go into effect on Friday, will remain in place at least until mid-October.

The British government, battling a second wave of coronavirus cases, announced a new wage-support program on Thursday — one far less generous to workers and employers than the furlough program it is replacing, which expires next month.

Further doubts over the peaceful transfer of power

Speaking to reporters, President Trump stood by his extraordinary suggestion that he might not accept the results of the election if he loses. “We want to make sure the election is honest, and I’m not sure that it can be,” he said, branding mail-in ballots “a whole big scam.” Just yesterday, he refused to commit to a peaceful transfer of power after the Nov. 3 election.

Republican leaders insisted there would be a peaceful transition, but they stopped short of directly criticizing the president. But Democrats sounded the alarm. Representative Adam Schiff of California, who led the drive in the House to impeach Mr. Trump, said flatly, “This is how democracy dies.”

Mr. Trump was jeered by protesters while paying his respects to Justice Ruth Bader Ginsburg in Washington.

Opinion: Trump’s words are a naked declaration of autocratic intent, writes columnist Michelle Goldberg. But it’s important to remember that Trump and his campaign are trying to undermine the election because right now they appear to be losing it.

The sudden resignation of a powerful cardinal

In a cryptic late-night missive, the Vatican announced the resignation of one of the Roman Catholic Church’s most powerful officials, Cardinal Giovanni Angelo Becciu, a fixture of church intrigues and internal power plays who also lost his rights as a cardinal.

Italy’s news media reported that Pope Francis had shocked Cardinal Becciu on Thursday by demanding his resignation. A call to Cardinal Becciu’s residence was not answered on Thursday evening, but the Italian news agency AdnKronos said it had reached him. “I prefer silence,” it quoted him as saying.

Go deeper: Cardinal Becciu is not your everyday eminence. Under Pope Benedict XVI and Pope Francis, he oversaw the Vatican’s ambassadors and played a major role in running the Curia, the bureaucracy that governs the Vatican, where he had unfettered access to the pontiff.

Young women on the front lines of Thai protests

Pro-democracy demonstrations in Thailand in recent weeks have been dominated by an emerging political force: young women. They were the early organizers of the demonstrations and appeared to make up the majority in recent protests. Above, Sirin Mungcharoen, an activist, holding up the defiant, three-fingered salute from the “Hunger Games” series.

Though the goal is to urge Thailand’s old guard to embrace new ideas, the women are also speaking out against the patriarchy that controls the military, the monarchy and Buddhist monkhood.

Aleksei Navalny: The Russian authorities froze the assets of the opposition leader who was poisoned last month, acting at the behest of a Kremlin-allied businessman known as “Putin’s chef,” Mr. Navalny’s spokeswoman said on Thursday.

Parental leave: Paid paternity leave in France will be doubled from 14 to 28 days starting next summer, and fathers will be required to take at least a week off work after their babies are born, in one of the more generous plans in Europe.

BAFTAs: All 6,700 voting members in Britain’s version of the Oscars will have to take unconscious bias training, and there will be a quota for women in the first round of voting for best director.

Snapshot: A protester, above, wrote a message at a memorial for Breonna Taylor in Louisville, Ky., on Thursday, a day after the announcement that a grand jury had not indicted anyone in her death. After demonstrations in the city, Louisville’s mayor extended a nightly curfew, originally set to end Saturday morning, through the weekend.

Lives lived: Harold Evans, the crusading newspaperman who helped redefine high-quality newspapers in his native Britain before reinventing himself in the United States as a publishing and literary luminary, died at 92 on Wednesday night in New York City.

What we’re reading: This Vogue article on Ruth Bader Ginsburg’s husband, Marty, who supported her career, dreams and ambitions. “This egalitarian partnership was a rarity for a woman of her generation,” writes Carole Landry of the Briefings Team. “It’s something that many women aspire to today.”

Cook: This vegetarian rendition of Taiwanese meefun gets its umami from dried shiitake mushrooms and gains a little heft from eggs.

Read: Among these 17 new books out in October are biographies that shed light on Malcolm X, Sylvia Plath and the Beatles. Martin Amis’s new novel, “Inside Story,” and Sayaka Murata’s “Earthlings” also hit the bookstores.

Go (virtually): Your guide for this tour of Times Square, the heart of Midtown Manhattan, is an expert from the Harvard Graduate School of Design who offers a look at the legal battles that shaped 42nd Street.

Whether you’re a home chef or an armchair voyager, look to our full At Home collection of ideas on what to read, cook, watch, and do.

The pandemic has disrupted everything — including the friendships we ordinarily hold dear. Whether your connections have been rocky the past few months or have iced over completely, here are some ways to heal while socially distancing.

Make a genuine connection. If getting together isn’t feasible or safe, you can arrange a video call. However, a one-time conversation over video chat probably won’t be enough to get the friendship back on track. Setting up another call or check-in at a future date will keep the positive momentum going and help normalize the relationship.

Extend as much grace as you can. “We need to have compassion for the stresses that people are under,” said Lydia Denworth, author of “Friendship: The Evolution, Biology, and Extraordinary Power of Life’s Fundamental Bond.” Some people are untouched by the pandemic; others have had their lives grind to a halt. Problems can arise between friends who don’t acknowledge that different people are experiencing this crisis in different ways.

Try not to take a “no” personally. If friends say they can’t talk to you right now, don’t spiral into negative questions and assumptions. “Whenever anyone says ‘no,’ it’s basically them taking care of themselves,” said Ivy Kwong, a licensed marriage and family therapist. Respect their decision and let them know your door is always open to them.

Express gratitude. Write a handwritten letter telling your friends how much they mean to you. Voicing your deep appreciation could help strengthen your bond.

Accept that you may have outgrown this friendship. Just because a friendship has existed for a long time, that doesn’t mean it’s capable of providing you with what you need today. Take this moment to identify the weaker friendships: “The ones that aren’t sustaining you, don’t make you feel good and that are lopsided,” Ms. Denworth said.

That’s all for this week. See you Monday.

P.S.
• We’re listening to “The Daily.” Our latest episode is about protests in Louisville, Ky., amid disappointment over the verdict in the Breonna Taylor case.
• Here’s today’s Mini Crossword puzzle, and a clue: “Slowly but surely, it grows on you” (four letters). You can find all our puzzles here.
•The word “yaysayer” was first published in The Times on Thursday, according to the Twitter bot @NYT_first_said.
• Arthur O. Sulzberger Jr. will retire as the chairman of The Times on Dec. 31 and be succeeded by his son, A.G. Sulzberger, completing a generational shift at a newspaper that has been in the same family for more than 120 years.