Home » Analysis & Comment » Opinion | Who Is the Republican Heir to Trump?

Opinion | Who Is the Republican Heir to Trump?

For the kickoff of his 2020 re-election campaign in Florida last week, President Trump was surrounded by thousands of devoted supporters in KAG (Keep America Great) hats.

More notably, though, he was also joined by a man who once called Mr. Trump “a con artist” and said he would “never get control of” the Republican Party. That man, reportedly “smiling and chuckling,” was Florida’s senior senator, Marco Rubio.

Mr. Rubio is hardly the only Republican who has come around as a Trump supporter. But he joins a cohort of Republicans — like the former governor of South Carolina and United Nations ambassador Nikki Haley, Senator Lindsey Graham of South Carolina (also in attendance at the re-election rally), Senator Ted Cruz of Texas and Senator Tom Cotton of Arkansas — whose motto for 2020 shouldn’t be “Keep America Great” but rather “We’ve Come a Long Way, Baby.” All of these people used to be severe critics of Mr. Trump, or at least the world’s most lackluster defenders. A lot can change in three years.

Is their support of Mr. Trump heartfelt or merely strategic? The exact mix depends a lot on which political figure we’re assessing. But there is almost certainly at least a decent scoop of straight-up political realism mixed in with perhaps a dollop or large scoop of genuine warmth. They all want to be president. And they are all, in different ways, setting themselves up to run in the 2024 election.

It’s worth remembering three things. First, President Trump has a close to 90 percent approval rating with Republican voters. Second, and despite that, he is very politically weak for a president heading into a re-election and could easily lose. And third, probably all of these figures want to run for and indeed become president one day — ideally sooner rather than later. Most of them probably assume there’s at least a 50-50 chance Mr. Trump loses in November 2020. And if they make nice with him now, they might be able to nab his endorsement or at least the support of a big chunk of his highly motivated voters when they step up to presidential plate sometime in 2023.

Cynical? Yes. Smart? Probably. Out of character and unseemly? It depends.

For Mr. Rubio, it’s worth remembering a few key points. First, he is the son of immigrants from Cuba. He has a strong instinct for survival, even if it entails taking extreme measures.

Mr. Rubio is far more of a political chameleon than many people think. Back in 2008, he endorsed for president former Gov. Mike Huckabee of Arkansas — patron saint of big-government social conservatives everywhere and archenemy of the uber-free-market Club for Growth. Just two years later, Mr. Rubio was elected to the Senate as a straight-up Tea Party darling who was endorsed by that same Club for Growth. After being elected, Mr. Rubio moved to the Republican mainstream, championing comprehensive immigration reform. Now he has more often than not supported President Trump.

What has persisted is Mr. Rubio’s strong desire to influence — some might say single-handedly dictate — United States foreign policy with regard to Cuba, Venezuela and Nicaragua. Mr. Trump has essentially given him that. The president, as the Florida-based Politico reporter Marc Caputo put it on Twitter, has “given him a major say in Western Hemisphere” policy. In addition, Mr. Caputo also noted that the president has helped Mr. Rubio “rehab his image with the immigration hawks of the party.”

That might prove vital when (not if) Mr. Rubio runs again, especially with many pro-immigration Republicans having either ditched the party full stop or distanced themselves from it in the era of Trump.

This would be especially the case were Mr. Cotton to step up to the plate — and it’s likely, because his presidential ambition seems boundless. Despite nationalist foreign policy forays from Mr. Trump, Mr. Cotton has maintained his Dick Cheney-esque neoconservative credentials, but he has also moved in the president’s direction on immigration, proposing “reforms” that favor a merit-based system and a 50 percent reduction in legal immigration. He’s actually more restrictionist than Mr. Trump where guest worker visas are concerned and opposed the administration’s plan this year to allow 30,000 more of them.

Ms. Haley, after endorsing Mr. Rubio in 2016, then embracing and going to work for the president, has since leaving the administration focused on starting her own policy group, Stand for America. Her group appears to maintain a strong emphasis on China hawkishness, which should appeal to Mr. Trump and his core supporters — probably even more than immigration hawkishness on the part of a Mr. Cotton does or would. But it’s also focused on mainstream Republican concerns like taxes. Some people have speculated that should the president implode before 2020, Ms. Haley’s organization could act as a launching pad that would allow her to jump into the race at the last minute — and if not then, certainly in 2024.

There are other Republican heirs apparent to Mr. Trump — Senator Josh Hawley of Missouri and Senator Ben Sasse of Nebraska have often been discussed. As it stands, it looks as if Mr. Rubio is getting more actual results from his embrace of the president than the others — though Ms. Haley’s service as United Nations ambassador certainly filled a gap in her résumé that should better position her if she runs.

But for now, like all of them, Mr. Rubio will have to tolerate nonstop mocking on Twitter for making nice with the man who called him “Little Marco” and just quietly remind himself that on what he truly cares about — Latin American policy — he is winning.

Precious few other politicians can say the same, perhaps especially Mr. Cotton and Mr. Graham, who aptly demonstrated last week that they do not have the ear of the president on Iran — something that raises real questions about the cost-benefit calculus that has guided their political maneuvering for 2020 and beyond. 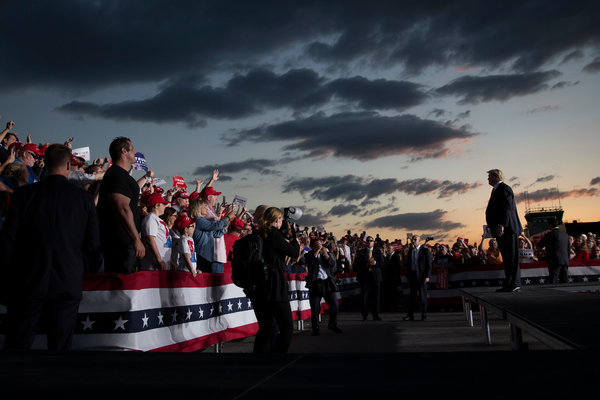 Liz Mair, a strategist for campaigns by Scott Walker, Roy Blunt, Rand Paul, Carly Fiorina and Rick Perry, is the founder and president of Mair Strategies.