Opinion | What’s Mightier Than the Coronavirus? A Freshly Killed Chicken

How Hong Kong’s food culture has adapted to epidemic after epidemic, fending off disease while saving its favorite dishes, and its soul.

Ms. McLane is a writer in Hong Kong.

HONG KONG — The other day, craving a bowl of fish ball noodle soup, I went to eat lunch at On Lee, a famous 54-year-old hole-in-the-wall on Hong Kong Island. I hadn’t been there since the start of the pandemic.

The cashier at the door, instead of greeting me with the usual efficient nod and asking, “How many people?”, pointed a temperature gun at my forehead before even allowing me to step inside.

In Hong Kong, where space is at a premium and mom-and-pop restaurants operate on a paper-thin margin, diners typically share tables with strangers. This is part of the fun of the Hong Kong eating experience: As you rubberneck you see what other people have ordered and occasionally strike up cross-table talk.

But that day the chatter was muffled, and no bowls of roasted chili oil were being passed across the table. The owners had installed movable plexiglass partitions, as per the latest regulations, to keep customers apart and conversational droplets away.

Before Covid-19, there was SARS, in 2002-3. And before that, the bubonic plague, smallpox, leprosy, rabies and bird flu. Infectious diseases have been part of Hong Kong life at least since the territory was colonized by the British in 1841.

Few major modern cities have been so profoundly shaped by their battle against contagion. And if you dig into this city’s food culture, you’ll find enduring traces of epidemics past.

For instance, according to Sidney Cheung, a food anthropologist at The Chinese University of Hong Kong, it was SARS that helped establish the custom in local restaurants of providing separate sets of chopsticks: one for eating, the other for serving.

This might not seem like a big deal, but in a culture that has a specific term — “gaap sung” — for taking food from a common platter with your chopsticks, it is.

Now, courtesy of the new coronavirus, chopsticks for serving can often be found in even the most humble street eateries.

As for the chopsticks you eat with, the old-fashioned canisters stuffed with communal acid-green and neon-orange plastic chopsticks that used to grace the tables at On Lee are gone. They have been replaced by individually wrapped packages of the disposable Japanese-style kind.

Hotpot? Not. The Sichuan winter tradition that became a Hong Kong year-round rage in the 1990s lost its allure in late January, after 11 members of one family became infected with the new coronavirus from sharing a holiday meal over a bubbling communal pot.

The city’s most famous breakfast and lunch custom, dim sum, has taken a hit, too. Normally it’s a boisterous occasion, with extended families or office mates hunkered over steamer baskets that cover all the tabletop real estate. But in late July, the Hong Kong government restricted restaurant dining to a maximum of two people per table. (The rule has recently been relaxed to allow four people per table starting Sept. 11.)

Diners have had to adjust to unaccustomed dim sum intimacy: a pair of people, a few lonely baskets and quiet, face-to-face conversation.

Dinnertime has suffered especially. The typical Cantonese restaurant meal is a delicate balancing act of multiple courses, each showcasing a different ingredient, flavor, texture, cooking method and — in a culture in which food is also considered medicinal — health benefit. Ordering the right parade of dishes is an art, and they are sized for group-sharing so that diners (ideally six to eight people) can eat a bit of everything while maintaining dietary equilibrium. Downsizing restaurant meals to only two (or even four) people means adjusting not just service and table size, but also menus and recipes, as well as the cuisine’s very ethos.

Hong Kong, a crowded semitropical city built on global trade, has been a crucible for contagion pretty much since its urban beginnings.

The catastrophic bubonic plague that first hit in 1894 and then recurred redrew the city’s urban landscape — an entire disease-ravaged neighborhood was razed to the ground. It also sowed the seeds of what would become an influential and wide-reaching public health and hygiene bureaucracy.

Well over a century later, that legacy can still be felt in Hong Kong’s stringent regulation of foodstuffs, public sanitation and disease control, as well as in the strict (some say too strict) measures recently imposed in response to SARS-CoV-2. 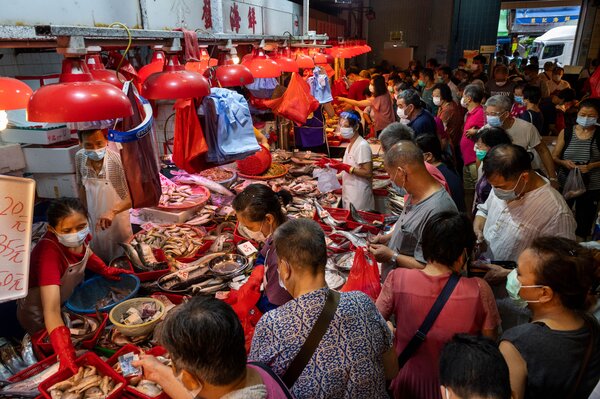 One of the pandemic’s biggest casualties here has been the reputation of wet markets.

It is at one of those, in Wuhan, China, that the original outbreak is said to have occurred. A sudden surge of infections in Beijing in June was also traced to a wet market. So, too, with some cases from the latest, third, wave of infections in Hong Kong, the city’s worst so far.

For my Western friends who’ve never traveled to Asia, the very word “wet” seems to conjure up frightful visions of blood, contaminated fluids and unchecked filth. In fact, “wet market” is simply a literal translation of the Cantonese “sap fo gaai sih,” a term for a market where fresh vegetables, meat, fish — and sometimes live animals — are sold (as opposed to a “dry” market, which sells dry goods and canned or bottled foods).

I shop in a wet market almost every day, and it pains me that the place where I buy wriggling, silvery pomfrets plucked from a bubbling water tank by the fisherwoman herself is being rebranded worldwide as ground zero for the pandemic.

I suppose I’m experiencing something like what Hong Kong’s Cantonese community must have felt at the turn of the last century, when after an outbreak of the bubonic plague the British colonial authorities scapegoated street markets. Brandishing rules, laws and inspections, they pulled vendors into purpose-built indoor premises.

The wet markets survived nevertheless — there are hundreds in Hong Kong today, including 74 run by the government — because Cantonese cooking requires above all the freshest ingredients, and here fresh means something just killed, just picked or just plucked.

The cuisine originated in Guangdong Province, in southern China, a region well known for the abundance and variety of its foodstuffs. Cantonese chefs strive to create dishes that capture the ephemeral intensity and integrity of a food’s original essence, rather than smother it in spices or heavy sauces. A grouper will arrive at your table perfectly steamed, garnished with nothing but a whisper of hot oil and soy sauce, and a scattering of ginger slivers and spring onions.

Cantonese cuisine can’t be maintained at its highest expression without wet markets, and remarkably the city authorities, both British and local, have gotten this. Despite a contagion-driven obsession with hygiene, they have adapted health regulations with elaborate workarounds to preserve the local food culture.

In Cantonese cooking, there is simply no substitute for a just-killed chicken. The classic preparation, “bak chit gai,” is deceptively simple: a whole chicken slow-poached in water, hacked into small pieces and served with a side of dipping oil infused with ginger and scallion.

Getting the dish right is not so easy. Cantonese cuisine plays with subtleties of texture as well as flavor. The chicken can’t just taste good; it must feel right in the mouth: tender but with a chewiness to the bite.

“You lose that texture if your chicken has been chilled or frozen,” Lau Chun, a Cantonese chef and food columnist in Hong Kong, explained. “It can get soft and mushy.”

Having a ready supply of live chickens is also important for reasons that transcend the culinary. “We have a saying, ‘Kill the chicken to thank the gods,’” Professor Cheung said.

“Cooked chicken is a ritual offering in religious practice. And of course you want that to be of quality. You wouldn’t want to be offering a frozen chicken to your ancestors.”

Over the years, the live chicken has been a flash point between Cantonese culture and Western presumptions of cleanliness and cultural superiority.

A local newspaper article from 1895, the second year of the bubonic plague, describes the food stalls newly established by the British authorities as a “healthful change” from “the old dirt begrimed sheds which have for the last years answered for the Hong Kong Market.”

Mr. Lau, the chef, told me: “There’s always been controversy over the practice of selling fresh-killed chicken and other live animals in Hong Kong. It touches issues of hygiene, animal welfare and how supposedly ‘barbarian’ we Chinese are.”

In fact, it was local Chinese elites, not the British, who spearheaded the drive to eliminate the sale of exotic animals in Hong Kong wet markets after a rabies panic hit the city in 1949. The “Dogs and Cats Regulation” ended the sale and consumption of those animals for meat in 1950.

Yet the chicken, even after more than a century of plagues, bird flus and coronaviruses, is still quite alive and squawking.

In my old local street market in Wanchai, a neighborhood in the city center, two vendors in open storefronts ply their trade across from each other. Despite the premium price — a live three-to-four pounder can go for $30 — lines often stretch down the street on Sundays and around Chinese New Year, both high-demand chicken occasions.

Middle-aged women point at their preferred bird in the cage. The butcher holds the reluctant fowl up to demonstrate its size. Soon, feathers and squeals are flying from the back of the shop.

Watch this scene, and you might think that little has changed since the 19th century. But you would be wrong.

From egg to pot, the contemporary Hong Kong chicken has been bred and monitored and regulated in ways that wouldn’t have been possible even 30 years ago.

After bird flu emerged here in humans in the late 1990s, local health officials, along with many politicians, called for an end to the live-chicken trade. But in the face of opposition from the public, they eventually kept bak chit gai on the menu by imposing near-draconian health regulations at every stage of the trade.

Today, health officials inspect Hong Kong’s 29 government-registered chicken farms once a week. They require a vaccination certificate and blood test for every bird.

Delivery trucks must drive through a disinfection pool when entering or leaving a wholesale market. They may only carry birds from the same farm, with no mixing. That way any infection can be traced with accuracy.

Once the tagged-and-tracked chickens arrive for sale at markets, their cages are separated from shoppers with plexiglass partitions like the ones now commonplace in Hong Kong restaurants.

For these socially distanced chickens, the clock is ticking. No bird is allowed to spend the night at the market. Come 8 p.m., the ones that weren’t killed for sale that day will be slaughtered and sold the following day as cheaper “chilled” chicken.

Faced with an epidemic and a public health dilemma, Hong Kong developed an intricate, expensive and time-consuming regulatory regimen — all to preserve a flavor, a texture and a Cantonese cuisine classic that people refused to give up. Food, tradition and culture are stronger than anything a disease can throw at us.

Daisann McLane is a writer living in Hong Kong.

Opinion | It Hurts to Keep Hoping for Justice