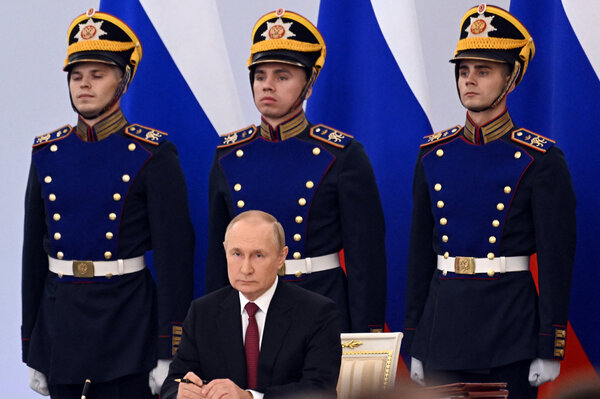 WASHINGTON — Way back when, I was a Cosmo Girl.

I read Cosmopolitan magazine and studied its barrage of tips on how to attract men.

One tip was to read an intriguing book on the bus to and from work. I settled on Dostoyevsky’s “Crime and Punishment.”

This literary honey trap did not work. But after reading “Crime and Punishment,” I came away thinking the Russian temperament was soulful and truthful.

Raskolnikov, the poor former student, kills an older woman who is an unethical pawnbroker, as well as her half sister. He is immediately filled with guilt and disgust and, in the end, turns himself over to the police.

It got stuck in my 20-year-old head that self-incrimination was a Russian trait, and that Russians understood on a deep level that you can’t put yourself above the rules just because you think you’re superior.

Vladimir Putin, of course, contradicts that notion, as did Stalin.

Putin is less Dostoyevsky than Euripides, a walking revenge play. Like Medea — a searing production of the opera kicked off the Met season on Tuesday — Putin commits savage murder of innocents without worrying about the consequences.

Medea feels disrespected — that’s all she needs to justify her carnage, murdering her own children and her husband’s new bride with a poisoned robe and coronet. In some versions of the Greek myth, Medea helped Jason get the Golden Fleece, killing her own brother and betraying her father to assist him, and she wasn’t about to see her husband happy in another woman’s arms. Now she wants blood, summoning in the opera the “Black Furies” and “deities of Hell.”

Putin, too, feels disrespected, still mourning the breakup of the Soviet Union, content to murder any number of innocent Ukrainians to slake his longing to stitch that lost empire back together.

At the end of the opera, Medea sets fire to the temple where she has killed her two sons. It bursts into flames around her. The horrified crowd runs away, singing,

Oh, terror!
Earth and Heaven are in flames!
Let us fly from
the burning sky.

In an eerie echo, Putin raised the chilling specter of a burning sky in a speech on Friday at the gilded Georgievsky Hall of the Grand Kremlin Palace. He darkly alluded to using nuclear weapons, which would leave earth and heaven in flames.

“The United States is the only country in the world that has used nuclear weapons twice, destroying the cities of Hiroshima and Nagasaki in Japan. And they created a precedent,” he said.

Sounding demented, Putin charged that “the dictatorship of the Western elites” was an “overthrow of faith and traditional values.” It has, he said, come “to resemble a religion in reverse — pure Satanism.”

Wrapping up his own destiny with Mother Russia’s, noting that his country must occupy its rightful place in the world as “a great thousand-year-old power, a whole civilization,” he announced that he was formally swallowing four provinces in eastern Ukraine following fake referendums there.

We are awash in fear and anger at his unholy brutality, but Putin doesn’t care. Like Medea, he is unconcerned about the cries of the Greek chorus.

To justify his unprovoked attempt to subsume Ukraine, Putin made the absurd claim that the West is a “neocolonial system” that has always “dreamed about” dividing, weakening and breaking up Russia and turning it into a colony.

While President Biden and officials in Europe blamed Russia for sabotaging the Nord Stream pipelines, designed to carry Russian natural gas to Europe, Putin implied it was the work of the Anglo-Saxons. “Sanctions are no longer enough, and now they have turned to subversion,” he said.

Biden responded during a news conference at the White House on Friday, announcing that the administration was imposing new sanctions against Russia, and stating that the world would not recognize the fraudulent referendums.

“He’s not going to scare us or intimate us,” Biden said. “He can’t seize his neighbor’s territory and get away with it.”

The Ukrainians are making successful military offensives in the northeast of the country, and Russian men are fleeing Putin’s Russia in droves; by some estimates more men have left Russia to avoid service in Ukraine than have served there.

Donald Trump posted on his social media site, “The Russia/Ukraine catastrophe should NEVER have happened, and would definitely not have happened if I were President.”

He may be right. If Trump were president, he would be in Putin’s pocket and America would not be helping Ukraine.

It has long been assumed that a nuclear weapon would never be used again because of the consequences. But what if you’re dealing with a malefactor with no concern for consequences? A modern Greek tragedy.