Opinion | The Men Who Want to Push Britain Off a Cliff

A few days ago, Prime Minister Theresa May unveiled her deal with the European Union. Within 48 hours, Britain’s government spun into crisis. Mrs. May’s survival is threatened as furious prominent Brexiteers go public with their intention to unseat her. Four ministers have resigned, more resignations may follow and nobody believes that she has the votes to get her deal through Parliament. What happens after that is a conundrum.

The cause of this paralysis is the hard-line Brexiteers, a frighteningly powerful cohort within Mrs. May’s Conservative Party, a group that is heedless about economic damage to Britain in pursuit of a political goal.

The first minister to resign was Mrs. May’s Brexit secretary, Dominic Raab, a cold-eyed man in a hurry, a flintily ambitious Thatcherite. The bid to topple Mrs. May was initiated by Jacob Rees-Mogg, a vain, drawling member of Parliament, a financier who once campaigned alongside his nanny in a Mercedes and has built a career as a political rock star and possible leader on the back of such affectation. They join an earlier defector, the flailing, floppy-haired Boris Johnson, a man who is half-crazed by his repeated failure to become the Conservative Party’s leader and who is desperate to grasp at his last chance, even if it means undermining the country.

Everything is up in the air in the Britain’s tumultuous politics right now, but there is one certainty: There is no limit to the practical, economic and psychological damage these Brexiteers are prepared to inflict on the rest of us in the pursuit of their delusions or their demented desire for power.

They savage Mrs. May’s deal and offer no practical suggestions for anything else. This is an utter failure of responsibility. Yes, the prime minister’s deal is pitiful, an awkward compromise that will hobble Britain’s economy and diminish our power. But the truth is — and everyone knows this — there is no better, purer Brexit available without a permanent economic hit.

If they were reasonable people, the pro-Brexit faction would now be shocked into facing reality. But they are not. These are the same politicians who tricked voters out of Europe by promising them that leaving would be all gain and no pain. Britain would become proud, sovereign, powerful, more prosperous. It could slash immigration, enrich its health service, cut magnificent and profitable trade deals with the rest of the world, opt out of European Union laws and still trade with and travel freely in Europe.

It was always rubbish, marketed by people deliberately indifferent to facts. The European Union was never going to let us leave the club while retaining all the advantages of belonging, any more than a tennis club allows ex-members to use the facilities for free. It said so, patiently, repeatedly. The agonizing negotiations of the past 18 months proved that over and over. 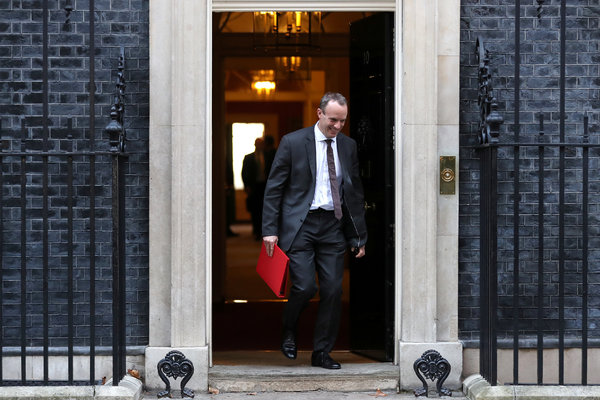 Mrs. May finally managed some wriggling round the edges, reducing part of the huge and unavoidable economic penalties of Brexit by keeping Britain in the European Union Customs Union and parts of the single market. It is a valuable concession, and one the European Union has agreed to principally in order to not inflame sectarian tensions in Northern Ireland, which would otherwise have to rebuild a border with the Irish Republic. The price that must be paid for remaining in the market is that Britain agrees to faithfully track and follow its rules, while no longer having any voice in how they are made.

These restrictions have sent the hard-line Brexiteers into a cold fury, but they were inevitable. You can’t even join a tennis match if you insist on drawing your own courts and deciding your own scores. The Brexit fanatics blindly ignore that. They have learned nothing, acknowledged nothing.

Rather than accepting their shameful role in deceiving voters over what was possible, they are doubling down on denunciation. They accuse Mrs. May of betrayal, of trapping and binding the country, of breaking her word. It is sheer selfish manipulation, political destructiveness on a huge scale, because they cannot get what they want; indeed, they cannot agree among themselves on what they want. They want the prime minister removed, but while they may secure the votes to challenge her, they’re unlikely to get enough to unseat her.

Even if they succeed in wounding her so deeply that she decides to step down and a hard-line Brexiteer takes her place, a new prime minister cannot negotiate a harder Brexit; the European Union has made it clear that the withdrawal deal is closed. If these craven politicians did find their way to power and tried to force a “no deal” Brexit — leaving the European Union without any kind of agreement in place — Parliament and the country would revolt. Nearly four out of five voters thought Brexit was going badly this July. In some areas that voted Leave, there have been big swings toward staying in the European Union.

In their grab for power, these monstrous, preening egos, desperate for validation and vindication, are already steering the Brexit process out of control, knocking Mrs. May’s deal sideways, increasing the speed at which investors and businesses flee. This chaos could last weeks or months. But the group’s ruthlessness in mowing down the middle ground of a compromise Brexit may give them whiplash. For members of Parliament, who must pass the final vote on any Brexit deal, the recent Brexiteer extremism has made their choices far starker and has raised the stakes.

If Mrs. May’s deal cannot get through Parliament, and the nightmare of a no-deal looms, then it becomes much more likely that a decisive number of members of Parliament will resolve that the final decision has to be returned to the electorate, in a second referendum that is being called the People’s Vote. Last month, an estimated 700,000 people marched in London in support of such a referendum.

The People’s Vote could offer the British electorate three choices: no deal, Mrs. May’s deal and remaining in the European Union. A recent poll found support for such a vote is now running at almost 60 percent, while the Remain vote has shifted from 48 percent in the referendum to 54 percent now.

A few weeks ago, I feared that a second vote would feel illegitimate, that a compromise Brexit, though bad for the country, should go ahead. The dangerous intransigence of the hardest Brexiteers has changed my calculation, and may change that of many others.

These hard-liners are ruthless. They aren’t prepared to accept a compromise that the prime minister has constructed for them. Instead, they are blowing it up. By eliminating the center option, they intend to push Britain to the hardest possible Brexit, toward the wrecked economy and shattered lives that would follow. They have destroyed any sense that I — and many others — had, that we owe it to them to honor and accept the original referendum. They are polarizing and galvanizing us. If no deal is the Brexiteers’ preferred option, I can with a clear conscience campaign for Remain in a People’s Vote. Anyone else could, too.

It’s just possible that the crash the Brexiteers are engineering could also be their own.

Jenni Russell (@jennirsl) is a columnist for The Times of London and a contributing opinion writer.