What does the European Union need in order to face the barrage of weighty problems before it today? Some propose “more Europe” — meaning more and deeper integration. But many Europeans have become reluctant to take that path, and Britain is about to forge a path of its own.

The challenges to the Continent are grave: Globalization’s bountiful rewards are neither evenly nor fairly spread. So the income gap has widened, economic success has become more cutthroat, and automation has reshaped employment. A consequence is that collective responsibility for the less well-off has been undermined; so have the sensibilities of communal experience, responsibility and ownership, all of which were more prevalent in the decades immediately after World War II, when the integration of Europe was a fragile dream.

Add to those issues today’s mass migrations, terrorist attacks, spreading of disinformation through social media, and cyberattacks, all feeding xenophobia and nationalism.

And, of course, climate change and President Trump’s disdain.

If there is a common thread in all of these problems, it is the interplay of national interests and identities with the demands of an increasingly integrated continent, and an increasingly global world.

None of that was foreseeable to the originators of the dream of reviving a wartorn Europe seven decades ago. Even in the darkest days of World War II, small numbers of idealists, some of whom were in resistance movements, had contemplated some form of unification of Europe.

The idea gained ground immediately after the war, and among the idealists was Winston Churchill. In a speech he delivered in Zurich in 1946, he advocated unity on the broken Continent, looking to a future “United States of Europe” (though without British inclusion). That banner was picked up by others on the Continent, like France’s Jean Monnet, into the 1950s.

Today, the legacy of the past — overwhelmingly still the memories of the war, occupation and the Holocaust — plays a crucial role in shaping national identities in ways that have no equivalent in the United States. So the European Union, probably for the indefinite future, will have to remain a looser form of polity than America, while nevertheless developing greater collective power and speed of decision-making, to confront immediate and longer-term crises.

Possibly, as has often been suggested, a two-speed or multispeed Europe or European Union of concentric circles of differing levels of integration might eventually take shape. Still, a reasonable speculation is that at least over the next decade, the bloc will, in its essentials, retain a fairly close resemblance to its current appearance. 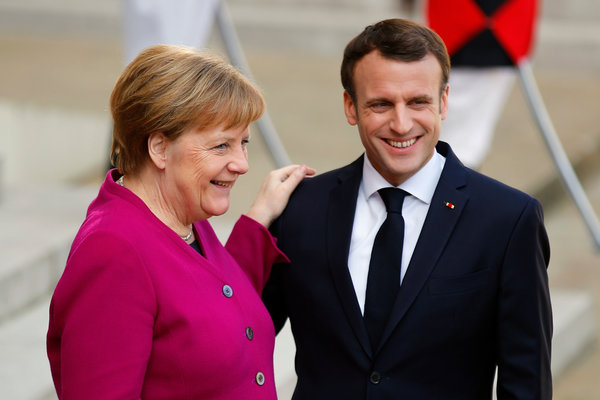 While the union now is in less than optimal condition to cope with the major challenges ahead, there is at least the hope that France and Germany will produce the necessary dynamism to carry out major structural reforms. And the imminent departure of Britain, however regrettable other member states find it, may turn out to have the effect of consolidating the European Union and accelerating reform.

But what shape could reform take? The current system is not made for speed or dynamism. It was designed to prevent any single power from dominating. Now Germany has evolved by default into the leadership position but is reluctant to lead. The smaller countries are suspicious about conceding power to Germany and view with some unease the likely renewal of the Franco-German powerhouse that Konrad Adenauer and Charles de Gaulle set in motion in the 1960s with an understanding to synchronize their countries’ roles in providing leadership on the Continent.

The European Council, created in 1974 and composed of leaders of the member countries, has become the most potent body in the union, though the council's centrifugal tendencies are constrained by the centralizing leanings of the European Union Commission and Parliament.

The difficulties of arriving at a solution to equip the European Union for the challenges ahead while satisfying the often contradictory demands of 28 member states (27 when — or if — Britain completes its exit) are daunting.

If a sense of European identity has remained largely an idea and aspiration rather than a reality, it has nonetheless acquired a form of political content. “Europe,” in the eyes of most Europeans, has come to be largely synonymous (positively or negatively) with the European Union. “Europe” demarcates the countries of the bloc as an interwoven community of nations separate from the others on the European continent — mainly Russia and former members of the Soviet Union. This “Europe” is neither the “Europe of the fatherlands” favored by de Gaulle and others, nor the supranational entity that was associated with Jacques Delors. Rather, it stands as a unique entity somewhere in between. Some continue to look to an ever-widening ”Europe” incorporated in a federal European state as a utopian future. Others, increasing in number, regard “Europe” with distance, even hostility, as a foreign body impinging upon their sovereignty as nation-states.

In the first postwar decades, the need to prevent any possibility of another war was the central ambition of the emerging European Community. But that message has inevitably faded over time. This has left the “Europe” of the European Union in the eyes of many of its citizens as little more than an opaque and detached organization embodying rules and regulations that affect most people’s lives, but cannot be challenged through political engagement. That opens the door to the politics of nationalist and separatist movements. In reality, the main emotional allegiance is not to “Europe” but still to citizens’ nation-state or region (or would-be independent nation-state).

However, while the union has been unable to create a genuine sense of European identity, the dangerously aggressive, chauvinistic nationalism that spawned two world wars scarcely exists any longer, and what does has been diluted and countered by the gradual increase in transnational cooperation and interdependence.

Europe has changed extraordinarily since World War II. It has become a continent of democracies (some more so than others), and of civil societies. The military play little role in domestic politics. It has learned to cooperate and negotiate, not resort to armed force, to resolve problems. And it has, at its center, as its most powerful and influential country, a peaceful internationalist Germany — the starkest imaginable contrast to the Germany that trampled human rights into the dust in the 1930s and 1940s and almost destroyed European civilization.

Europe has fought for and won freedom. It has acquired prosperity that is the envy of most of the world.

So, perhaps the elusive search for a European identity is unnecessary, as long as citizens of Europe’s individual nation-states are committed to upholding the common European principles of peace, freedom, pluralist democracy and the rule of law; to sustaining the material well-being that underpins that commitment; and to striving to strengthen wherever possible the bonds of transnational cooperation and friendship.

Ian Kershaw is the author, most recently, of “The Global Age,” from which this essay is adapted.