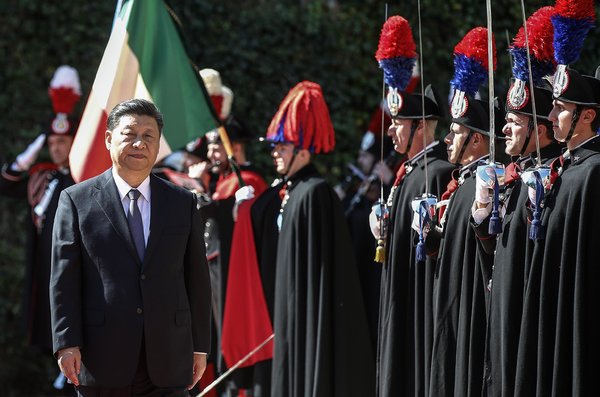 PARIS — Imagine Europe as a target on a radar screen, and you can see the warning alerts flashing red and ubiquitous. Europe is undergoing a multipronged, hybrid attack. The assailants do not coordinate and their goals may vary. But what these flashing signs represent is clear: In the new great-power competition among the United States, China and Russia, Europe has become prey. Its political allegiance to a weakening West, its internal divisions, its attractive assets and its market of 500 million consumers make it an ideal target.

The six-day visit to Italy and France that China’s president, Xi Jinping, is finishing this week could be read as a case study of one great power testing those points of weakness and wealth.

Russia, for its part a familiar friend and foe, has been at work for some time. The range of Moscow’s tools to undermine democratic electoral processes and the cohesion of the European Union, from troll factories to assistance provided to far-right and anti-establishment parties, is now part of our political landscape.

Five years of sanctions for the annexation of Crimea have not dented the Kremlin’s appetite for meddling in European affairs, nor have they prevented Russia from doing lucrative business. According to the Center for Strategic and International Studies in Washington, over the past couple of years Russia has managed to increase its economic footprint in European Union countries that are more welcoming than others, notably Austria, Italy and the Netherlands. Another recent report, by the online activist organization Avaaz, has shown the active role played by the French-language version of Russia Today, the Russian state media organization; it includes disseminating news, real and fake, about the “yellow vests” protests in France. The station’s constant coverage of the most violent clashes have proved widely popular on YouTube.

China uses a different approach. Under the guise of the concept of a new Silk Road, with its echoes of Marco Polo, President Xi wants to connect Europe to China economically. This has meant buying the port of Athens and some other crucial gates to southern Europe. Greece was desperate for money, Germany could see no wrong. The new Silk Road, now more prosaically described as the Belt and Road Initiative, has also involved setting up an organization called 16+1 (16 European former Communist states, 11 of them European Union members, plus China) to kindly help them build infrastructure. “In two years, I have had six bilateral meetings with my Chinese counterpart,” the prime minister of one small European Union country in the 16+1 said. “Need I say more?”

More daringly, the highlight of Mr. Xi’s visit to Italy, a founding member of the European Union, was the signing on Saturday of a Memorandum of Understanding to endorse the Belt and Road Initiative project.

No longer content with the periphery, China is aiming for the heart of Europe with newfound tenacity: When Washington and Brussels expressed their displeasure with his move on Italy, Beijing doubled down. The United States, supposedly Europe’s greatest ally, has its own fight with China — a big fight over trade that has already slowed economic growth in Europe, and over technological dominance. In a normal world, Washington would have enrolled its European allies in its fight. But this is not a normal world. President Trump’s America treats Europe either as a competitor or as a vassal.

Not a week has passed without new bullying from the Trump administration. At the Munich Security Conference in mid-February, Vice President Mike Pence ordered European Union governments to withdraw from the Iranian nuclear deal and stop “undermining” American sanctions — which also penalize European companies. French and British defense officials were incensed when America, whom they had followed into Syria, decided unilaterally to withdraw its troops while asking the French to stay behind. And, at a tense discussion about European defense behind closed doors, a senior American diplomat, speaking with a grant of anonymity from reporters in order to allow frankness, sternly lectured West European participants for not being “sensitive to the United States and to President Trump.”

Then came warnings against choosing the giant Chinese tech company Huawei to develop fifth-generation (5G) wireless networks, and threats by Richard Grenell, the American ambassador to Germany, of retaliation involving restrictions on intelligence sharing. Gordon Sondland, the United States’ ambassador to the European Union, warned of retaliation if Brussels limits the involvement of American companies in European military projects. Mr. Trump threatened Europe with “severe” economic pain if no progress was made in delicate trade talks. Soon enough, reports came out of Washington that Mr. Trump wants to bill European countries for the deployment of American troops, plus 50 percent for the privilege of hosting them, according to Bloomberg News.

Europe is a soft target. A close group of 28 states, but not a federal state, it is hampered by its complex decision-making process. The Brexit chaos will inevitably leave its mark. As the French historian Pierre Nora has noted, Europeans, once masters of the world, are now pushed to its periphery.

But Europe does not have to accept defeat.

A senior European intelligence official recently said there was a wake-up call in the range of threats confronting the E.U., including interference from Russia and the alt-right, and America’s “weaponization of extraterritorial laws in order to weaken our companies.”

“We must assert our European economic sovereignty,” he said. “We must rearm collectively.”

For that to take place, unity and political will are essential. Within the European Union as it is, that would be an uphill battle.

Europeans need more than a wake-up call. They must decide whether they can contemplate the prospect of their continent being cut up piece by piece by competing bigger powers, or whether they want to regain enough collective strength and common sense to control their own destiny. 5G networks will be a test. Though Huawei has the technological lead, strong doubts persist about its security. There are European alternatives. As the German center-right politician Norbert Röttgen pointed out on Twitter, “Europe has the technological capabilities to become an actor itself. That would be expensive. Hence the political question: Do we want to seize this opportunity or let it pass?”

But what role would Europe play in this new world? On March 5, France’s President Emmanuel Macron issued a solemn call for “A European Renaissance” that was published throughout Europe. “Europe is not just an economic market. It is a project,” he wrote, adding that the European civilization “unites, frees and protects us.” In an understated reaction titled “Getting Europe Right,” Annegret Kramp-Karrenbauer of Germany, the new leader of the conservative Christian Democratic Union, set out a different vision. The contrast could be called the status quo vision versus the strategic vision.

The lack of accord between these two close, major European nations shows the extent of the challenge. On China, though, they finally seem ready to act together. Moved by a sense of urgency to counter the Chinese divisive strategy, President Macron has invited Germany’s Chancellor Angela Merkel and the president of the European Union’s executive arm to join him in what was originally planned as a bilateral meeting with President Xi, on Tuesday in Paris.

Some European leaders still see their continent as the last defender of democracy and multilateralism. Few, unfortunately, are ready to unite to take up that fight.

Sylvie Kauffmann is the editorial director and a former editor in chief of Le Monde, and a contributing opinion writer.