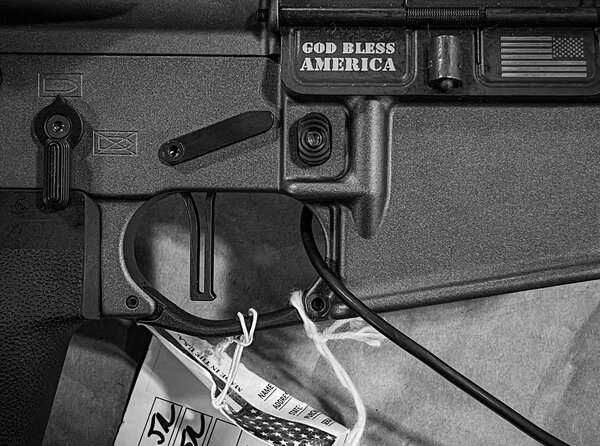 Yeah, six people died in a Virginia Walmart. A gunman in that Colorado Springs nightclub left five people dead and 18 injured. And then there was the shooting in Virginia that took the lives of three college football players who were riding back from a field trip — they’d gone to D.C. to see a play.

We’re talking about terrible, terrible events. It takes a lot to make American gun fatalities infamous. After all, if you define a mass shooting as one that kills or injures at least four people, there were more than 40 in November.

And what do you think is going to happen as a result? Any big social change? Reading all these stories, I couldn’t help remembering something Senator Chris Murphy, my go-to expert on these matters, once told me: that the public takes note of the gun issue only when there is a terrible multiple-fatality shooting, “and then the country only pays attention for 24 to 48 hours.”

But perk up. I talked with Murphy this week, and he seems to have gotten more optimistic about the possibility of progress. “I think the issue of gun violence is powerfully motivating voters,” he said in an interview. “That’s part of the reason Democrats did well in November. Parents are freaked out. A lot of parents aren’t willing to support Republicans until they take this more seriously.”

Before he entered the Senate, Murphy, a Connecticut Democrat, was a member of the House, with a district that included Newtown — the town where, a decade ago, 20 Sandy Hook Elementary School first graders and six educators were shot to death by a former student.

At the time, Murphy recalled, he was trying desperately to respond to the ungodly disaster by doing … something. But when he looked for Republicans who might be willing to sit down and talk about possible bipartisan gun legislation, he found a grand total of one.

So it was a great victory this summer when Murphy actually got a serious gun bill passed into law — the first substantial piece of federal legislation on the issue in nearly 30 years.

The new law provides more money for mental health, expands background checks on gun purchasers under 21 and makes it easier to get guns away from people with a history of domestic abuse.

That domestic abuse portion closes something called “the boyfriend loophole,” which allowed men who were convicted of assault against their girlfriends to continue to buy weapons. Now that was truly a loophole. You couldn’t buy a gun if you’d been convicted of assaulting your wife, but a girlfriend was … I guess a lesser being.

What’s next? Well, after all the mass shootings in November, Joe Biden called for a ban on assault weapons — one of which had been used in that Colorado nightclub. There was hardly an outcry of enthusiasm in Congress, and Murphy expressed doubt there was enough support to get it through the inevitable Senate filibuster.

Not that he didn’t appreciate the sentiment: “I’m so proud of President Biden. I love the fact he wears his passion for this issue on his sleeve.”

Biden did champion an assault weapon ban that passed when he was a senator leading the Judiciary Committee. In 1994. Which was scheduled to end after 10 years if it was not renewed. People, I do not want you to spend your holidays wondering why Joe Biden’s great proposal stopped being law before 2005. But if all else fails, feel free to blame the Republicans.

Surveys show that most American voters support the idea of gun safety legislation, but the political pressure for change doesn’t seem to be nearly as intense as it is about, say, abortion rights.

Well, Murphy responded, it’s getting there. “I think now it’s going to be a permanent Top-5 issue for a big chunk of swing voters.”

Hey, Top 5 is better than top nothing. Unfortunately, calls for reform have drawn a let’s-make-things-worse response from the other side. Perhaps you haven’t heard of the relatively new matter of Second Amendment sanctuaries.

Yes! This new incarnation of the concept of “sanctuary” is a tad different from the traditional image of helping innocent people seeking refuge from villains. Now it’s supposed to be a town or county or state that ignores gun laws that are already on the books. Ensuring safety for all local … bullets.

“It’s richly ironic for Republicans to say we shouldn’t pass new laws because we should focus on enforcing existing laws — and then in the same breath promise they will not enforce existing laws,” Murphy said. “The Colorado Springs massacre might not have happened if the county hadn’t taken that pledge. This is happening all over.”

Yes indeedy — one study found that more than 60 percent of the nation’s counties say they won’t enforce existing gun safety laws. Murphy has called for a “conversation” about whether these places — which are often rural or Southern or both — should be cut off from federal law enforcement funds.

See how civilized it’s possible to be in this debate? On the one hand folks look forward to the next gunfight at the O.K. Corral. On the other, they’re calling for a serious conversation.

Glad to be on the talking side of that one.