Opinion | A Toxic Alien Is Taking Over Russia

BALASHIKHA, Russia — Take any of the many highways out of the Russian capital and you can dissect the country’s strata like rings on a tree. Sentinel apartment towers replace the bustling illuminated center, then the belt of auto dealerships and box stores drifts by. Gradually, the landscape becomes sparse, with villages and towns sporadically punctuating the stretch of meadows and forests for thousands of miles in every direction.

Russia is the biggest country on Earth and both the state and the people take pride in the size of its territory — “from the southern seas to the polar fringes,” as the current national anthem goes. That quiet emptiness, the enormity of Russia, has been infiltrated in recent decades by an alien force: the giant hogweed.

This invader, an exceptionally tall plant with a toxic sap that can cause third-degree burns and blindness, has come to symbolize the fate of rural Russia: malign neglect by the government. While Russia may be vast, most economic activity — and much of life in general — is concentrated in a handful of cities. And after various Soviet-era attempts to develop land through centralized planning, there is evidence that the current government is doing the exact opposite. Enter the hogweed.

In the summer, the giant hogweed assumes the look of dill on steroids; its coffee-table sized leaves create thickets impossible to pass without a hazmat suit. In the winter, it desiccates into a brown skeleton. Outside Moscow, the hogweeds are often the only visible landmarks over white fields, ominous umbrellas standing in the snow like War of the Worlds troops poised to march. Officials have begun to refer to overgrown areas as “contaminated.”

Giant hogweeds grow naturally in the Caucasus Mountains. Evolving to thrive on shifting soils, they compete with other high-altitude herbage by yielding extraordinary seed counts — up to 100,000 per plant. The plant’s Latin name, Heracleum, hints at its extraordinary strength. In Central Russia, where typical meadow grasses are much shorter, it quickly overpowers all local species. 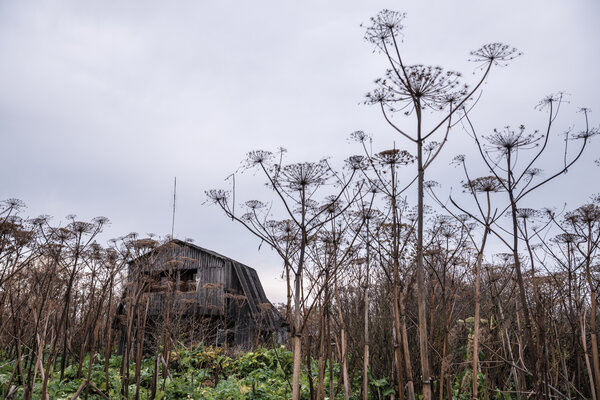 “Our plants cannot compete with it,” Dmitry Geltman, the director of the Komarov Botanical Institute of the Russian Academy of Sciences, told me. “It takes over deserted fields because it likes unstable soil. For any alien species, it is easier to infiltrate a fluctuating community.”

Mr. Geltman speaks in botanical terms, but he could be talking about life in rural Russia, which has experienced a relentless population exodus since the 1990s. Russia has some 222 million hectares of agricultural land, nearly 100 million of which are unused, according to a 2016 census.

Much of this vast territory — 386,000 square miles, about twice the size of Spain — was abandoned after the breakup of the Soviet Union because it was unprofitable to farm. As humans left, the hogweed advanced.

It seems the government doesn’t know what to do with the land, or the people on it: Rural Russians are twice as poor and jobless as those living in urban areas. Research has shown that the number of farms in the country halved between 2006 and 2016. The top 1 percent of all agricultural companies receive two-thirds of all investment — just 61 companies collectively own over 14 million hectares of farmland and prefer to use seasonal migrant labor. Rural Russians are shut out of economic opportunity.

Vasily Melnichenko, a straight-talking farmer from the Ural Mountains who heads a movement for rural development, says President Vladimir Putin’s government’s policy toward rural Russia has been awful. Rural people are seen as a “burden,” he said, sapping budget funding for roads, electricity and health care.

“It has gone on too long to be a mistake, but if it’s done on purpose, then that would mean we’re governed by enemies,” Mr. Melnichenko told me. “There have been dozens of road maps and national projects, but nobody can carry them out. There is a complete inability to understand the territory.”

Another 20 years of the same, he said, and all the remaining residents will die out, ending the Russian village as a form of life.

The giant hogweed is what happens when a land loses its stewards. The weed is expanding its coverage by about 10 percent every year. It now creeps to the margins of forests and rivers, even near urban areas. Even the heavily built-up Moscow region had almost 270 square miles contaminated with giant hogweed this summer, according to the regional government. In the Tver region, which lies between Moscow and St. Petersburg and is the size of Austria, the hogweed has permeated a third of towns and villages.

The invasion is one of the many environmental disasters brought on by Soviet centralized planning. After World War II, Soviet agronomists, keen to quickly rebuild the country’s agriculture industry, thought that the plant’s impressive biomass could make it a good crop to feed livestock. Seeds were distributed throughout the country.

Hogweed contains a high concentration of furanocoumarins, substances that cause severe burns and blisters when affected areas of skin are exposed to sunlight. Even so, the plant was grown nationwide. By the 1980s, when the plant began infiltrating central Russia’s wilderness, tests showed that cows fed on hogweed produced poor-tasting milk. Efforts to make the plant less toxic failed.

The plague could not be contained. While some regional governments now try to spray problem zones with pesticides, Moscow hasn’t paid the problem any attention or sought to understand its scope. Tatarstan, the only region to monitor its spread, has pleaded for federal help, saying that the area overtaken by the hogweed grew tenfold in the past eight years, with thousands of burn victims and even fatalities.

Some activists and scientists are experimenting with solutions, ranging from hogweed-eating snails to moonshine production.

One evening I joined an activist, Maria Popova, on a hogweed raid outside the Russian capital. We equipped ourselves with gloves, goggles and large kitchen knives on the edge of a field that is part of the popular Losiny Ostrov National Park — a large nature area close to Moscow.

“If you don’t interfere, the hogweeds multiply at a crazy rate and soon there is nothing but them,” she said as we hiked through the tall grass. Ms. Popova started patrolling the nearby fields when she came across “plantations” of hogweed on one of her walks. The national park, which is tasked with protecting biodiversity, has ignored the problem, she said. She called hogweed “a symbol of neglect.”

“At the national level, the government does nothing,” she said, rising up on tiptoes and hacking off giant umbrella-like flowering structures on stalks three meters in the air. It’s a trustworthy method to prevent the weed from seeding — one activist in a hogweed-fighting social networking group confessed to arming herself with a machete on cycling trips.

But urban activists are more likely to mobilize online, while in the provinces, there simply aren’t enough people who care, said Darya Grebenshchikova, a writer living in a shrinking village in Tver region.

“The hogweed is not perceived as a problem because there is no population here to perceive it as a problem,” she told me. “I have lost hope in some kind of renaissance of the village. The government has decided it’s too much hassle to keep the rural areas alive, so they are turning it into a desert.”

Maria Antonova (@mashant) is a Russian journalist who writes on science and culture.